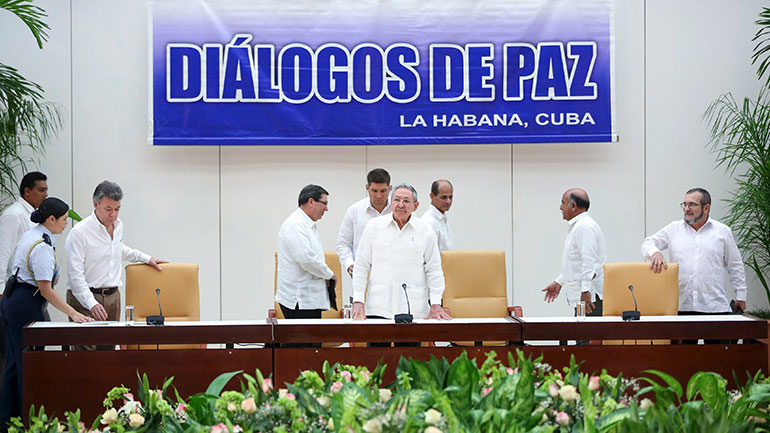 The United States reportedly played a prudent, but important role in a deal on transitional justice signed Wednesday by Colombia’s government and FARC rebels as part of ongoing peace talks.

According to newspaper El Tiempo, US special envoy for the peace talks, Bernard Aronson, was actively involved in the preparations for the justice agreement signed in Cuba, finalizing the details and attending the meetings.

Secretary of State John Kerry released a statement shortly after the signing of the transitional justice deal in which he congratulated all parties on this “historic progress” and expressed his hope that “the parties will soon conclude a final agreement to end this terrible war.”

The secretary of state reiterated the active role that the US has played in the peace process, explaining that he himself speaks regularly with president Juan Manuel Santos and that he has twice met with Colombian government negotiators for peace.

“US support for Colombia dates back more than 15 years to Plan Colombia,” added Kerry, a bipartisan initiative which aimed to combat drug cartels and left-wing insurgency.

Since then Aronson has gone between Bogota, Havana and Washington building a consensus on the subject of the negotiations.

These efforts included meetings with opposition leader and former president, Alvaro Uribe with the objective of softening is fierce opposition to the peace process.

Aronson also took Colombia’s peace negotiation the the US Congress to promote bipartisan support for Colombia.

This has been relatively easy on the Democratic side of Congress.

“If well-implemented, the agreement on transitional justice offers all Colombians, and especially those who have been victims of violence and abuse by parties to the conflict, a path to address the deep wounds of the past, hold accountable the perpetrators of violence and abuse, and break the culture of impunity.  It is important, however, for the implementation of this agreement not to whitewash serious human rights crimes committed by both sides,” said House Representative Jim McGovern (D-MA) in a press statement.

Aronson met more opposition from Republicans who said to be worried that the government would abandon the fight against illicit drugs and would cancel extradition requests for guerrillas charged with kidnapping or drug-trafficking.

Republican presidential hopeful Senator Marco Rubio wrote a letter to Aronson in February asking him to “reaffirm that the United States will continue to seek access to individuals who are wanted to stand trial in the United States for violations of United States law.”

Part of the Special Jurisdiction for Peace which was signed Wednesday guarantees safety from extradition for those who cooperate with the peace process.

Kerry emphasized that “the Colombian people deserve a just and durable peace, and this will be their victory,” adding that Aronson “will continue to stay closely engaged in this process.”

Peace talks have been taking place in Havana, Cuba since November 2012 between the FARC and the Colombian government in the hope of resolving the 51-year-long civil conflict which killed at least 260,000 Colombians and displaced over 6 million.