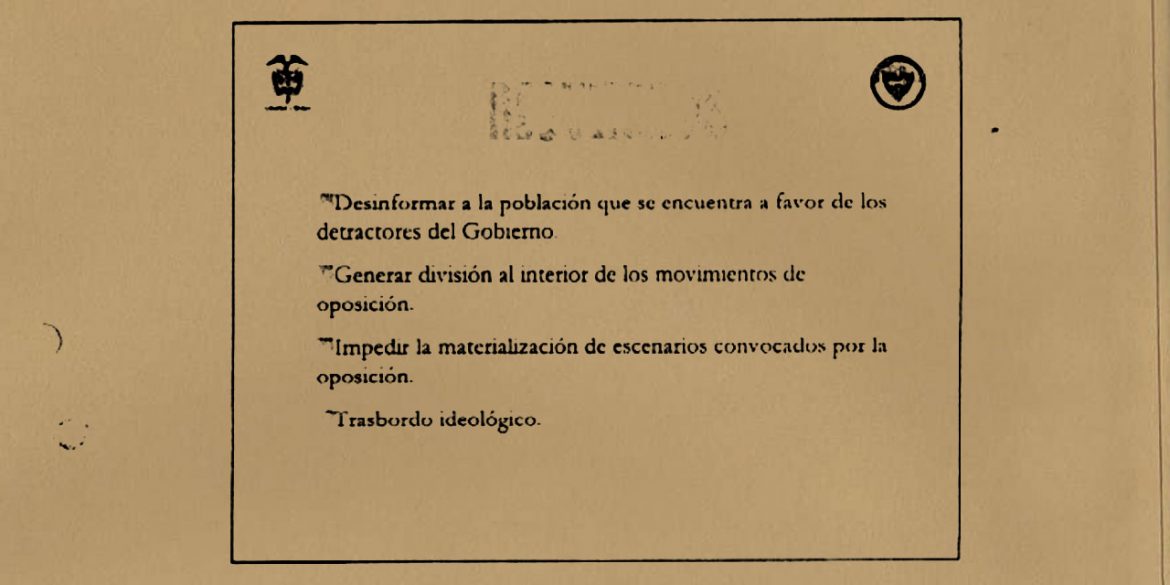 Colombia’s mass media played a key role in a 2002 terror campaign that sought to get former President Alvaro Uribe elected and the obstruction of justice to keep him out of prison.

This worked for a while as the media prioritize “the interests of the mafia and the plutocracy” instead of the public, according to the Autonomous University in Cali.

Despite the effort, Uribe is close to joining many of his former allies in prison as the Supreme Court is investigating the alleged fraud and bribery practices of the former Medellin Cartel associate. 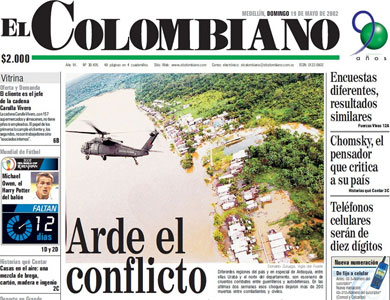 The earliest evidence Uribe was using mass media for a terror campaign dates back to the 2002 election campaign when media falsely blamed FARC guerrillas for five terrorist attacks in Bogota carried out by the National Army.

A fabricated assassination attempt on Uribe in the northern city of Barranquilla that cost the lives of five civilians one month before the elections was carried out by now-defunct intelligence agency DAS, but was also attributed to the FARC.

Although it is not yet known precisely who is behind this attack, everything seems to indicate that it would be the urban militias of the FARC, which in recent months have acted in different cities of the country.

A judge convicted multiple members of the military for the Bogota bomb attacks in 2006, but only weekly Semana reported on this.

Curiously, the same magazine revived the Barranquilla hoax in 2008 based on fabricated evidence on an alleged FARC computer.

There is no evidence aforementioned media were complicit in the 2002 terror campaign; the newspapers just didn’t verify authorities’ claims.

Only television network RCN and its sister companies openly supported the paramilitaries who helped the former president win the elections after the US government designated paramilitary organization AUC a foreign terrorist organization in 2001. 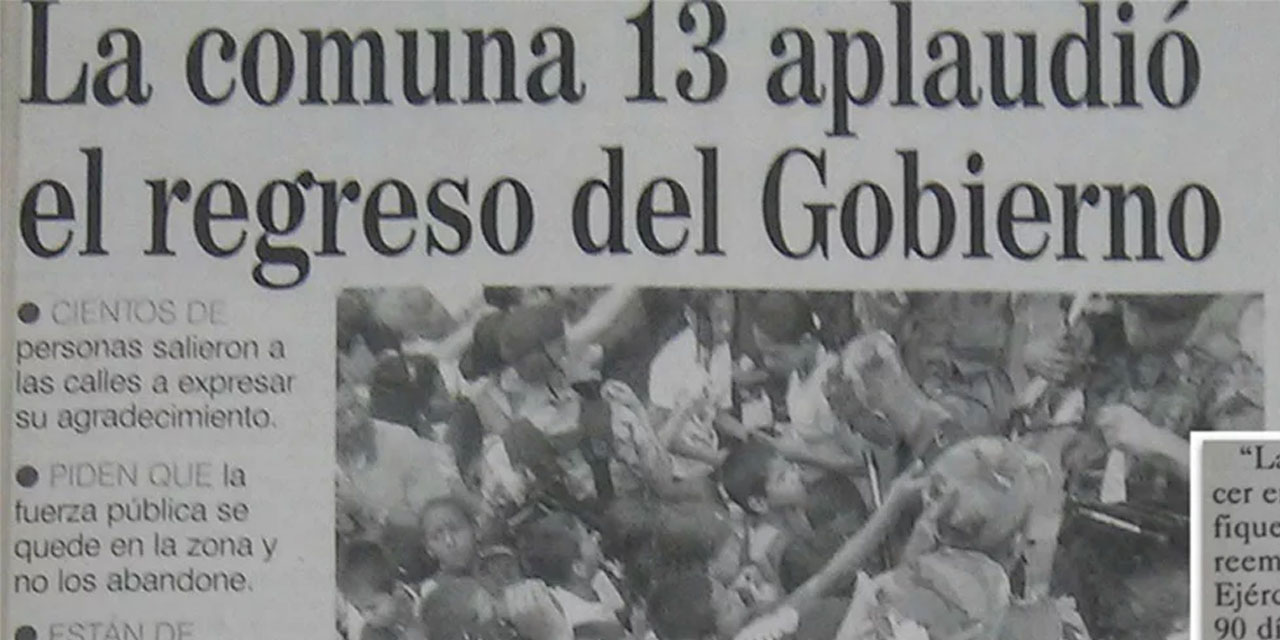 Immediately after Uribe’s election, AUC founder Carlos Castaño went on a PR campaign with the help of El Tiempo columnist Salud Hernandez who wrote the prologue of his book, RCN host Claudia Gurisatti who did two lengthy interviews with the mass murderer in 2002 and 2003, and El Espectador columnist Ernesto Yamhure who managed Castaño’s PR.

El Espectador columnist Felipe Zuleta argued that news media should “embed” themselves in the government policy and censor themselves particularly when it came to “annihilating” criminal elements.

We journalists… must begin by assuming that either this war is won by the Colombian state, even with certain restrictions on the press, or we all lose; in which case we will no longer have a country, or fundamental rights, or freedom of the press, or anything else.

El Tiempo in 2003 stressed the necessity for “psy-ops,” that seek to submit civilians to military rule while the paramilitaries were still fighting alongside the National Army.

Arauca proves that ‘psychological operations’ are not enough to win popular collaboration, which is indispensable in the fight against an enemy whose power people fear more than that of an absent state. Reducing the country’s problems to the lack of police and military security is wrong. A second element, which is decisive and little debated, is the restructuring and modernization of the armed forces. Progress has been made in recent years, but much remains to be done

In a news article that year, El Tiempo reported that while Uribe “didn’t get the donors to go for the wallet, he was able to neutralize the NGOs critical of his management” that included the mass killing of civilians media were reporting as military victories.

The president failed to demobilize the paramilitaries as Uribe’s term came to an end in 2006, but was able to bribe two congressmen to allowed Uribe a second reelection bid. 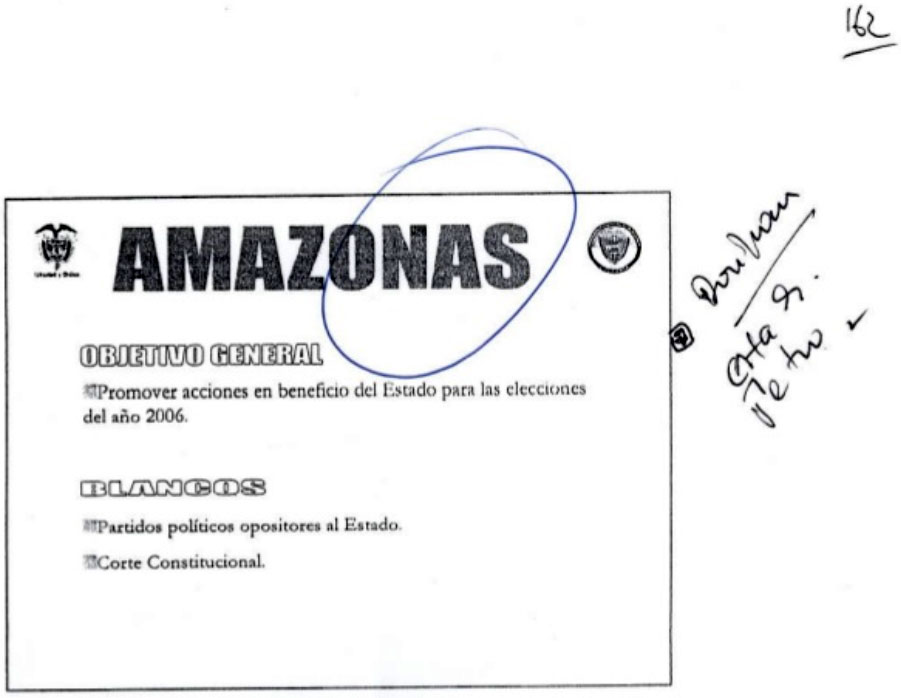 The DAS sought to rig the elections with “Operation Amazonas,” which sought to “promote actions to benefit the state for the 2006 elections.”

This 2005 operation included the intimidation of the Constitutional Court, which had to approve Uribe a second election run and smear campaigns against Uribe’s opponents, according to leaked DAS documents.

Amazonas was one of a number of intelligence operations, of which at least three were carried out with Hernandez, her friend Vicky Davila and a relatively obscure journalist called Jesus Antonio Villamizar.

These operations received the support of drug trafficker Juan Carlos Sierra, a.k.a. “El Tuso,” a friend of Uribe’s cousin Mario. 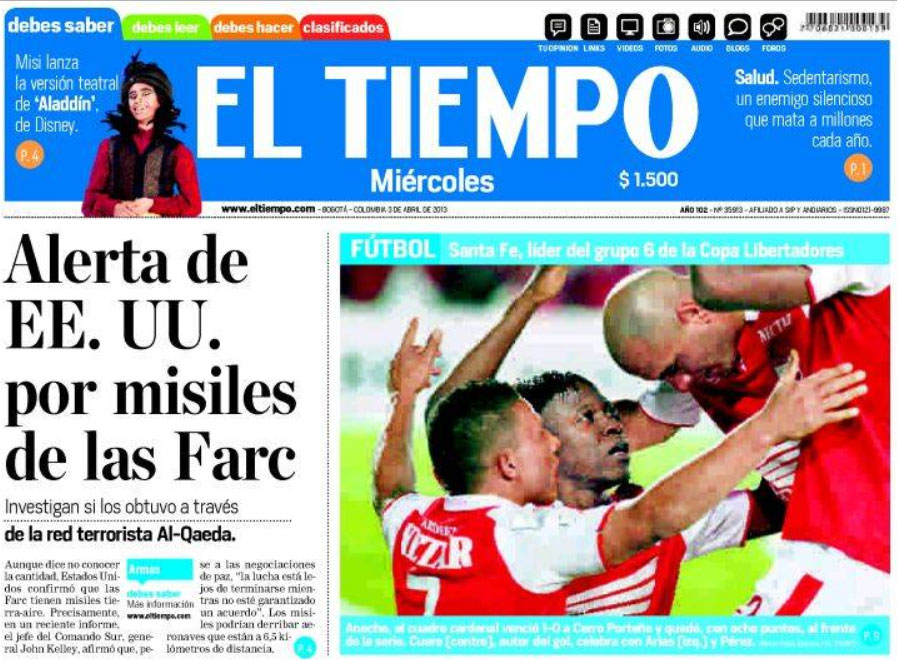 The US military contributed to the mass hysteria claiming Al Qaeda was providing missiles to the FARC.

El Tiempo, which was owned by the family of former President Juan Manuel Santos, fully supported the former president’s 2006 reelection bid, claiming Uribe was “the leader who… to us would seem the best qualified to govern us in the next four years.”

Two months after this editorial, former minister German Vargas survived a car bomb attack the newspaper’s website attributed to the FARC within half an hour.

Davila accused Santos of this attack in her 2014 book “Enemies,” much to the fury of Vargas who said the DAS tried to kill him.

Medellin newspaper El Colombiano, which has idolized fascist and nazi leaders since the 1930’s, stepped up their slander and stigmatization practices, focusing mainly on Uribe critics and peace advocates.

After former Interior Minister Fernando Londoño claimed that “San Jose de Apartado is a FARC enclave where they rule at will” in a 2005 column, paramilitaries carried out a massacre and El Colombiano owner Ana Mercedes Gomez was accused of taking part in a “criminal strategy.”

Semana changed course after the 2006 elections and began reporting on Uribe’s criminal practices, making the weekly a target of aggression. 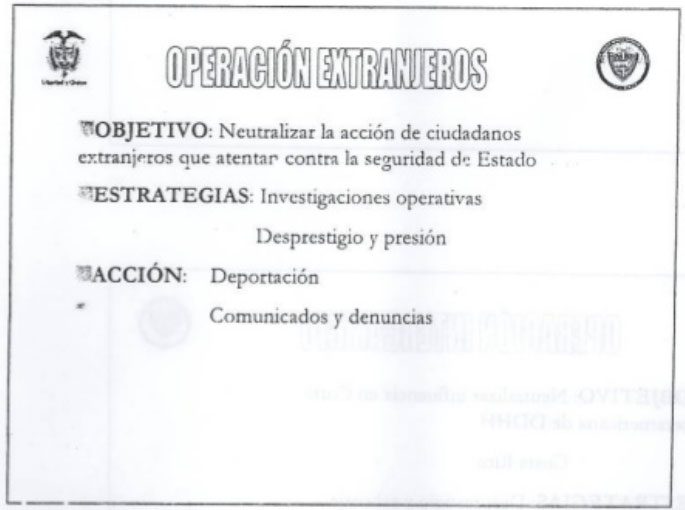 When she was director of radio station La FM in 2007, Davila apparently conspired with the DAS to interview demobilized paramilitary fighter “Tasmania” in 2007 in order to forge a criminal investigation against former Supreme Court magistrate Ivan Velasquez during her news program on La FM.

The conspiracy was in response to the magistrate’s investigation of El Tuso’s friend and Uribe’s cousin Mario, according to imprisoned former DAS executive Martha Leal, who was involved in the plot.

The narco allegedly paid Tasmania to incriminate Velasquez in a conspiracy made up by the DAS and at least one of Uribe’s closest aides, Edmundo Castillo, who is also in prison.

Hernandez falsely accused Supreme Court magistrate Ascensio Reyes of having ties to an Italian drug trafficker in a number of articles in newspaper El Tiempo that were part of the DAS’ “Operation Paseo” in 2008, according to Leal and another imprisoned former DAS executive, Jorge Lagos.

This theory was also promoted by Interior Minister Nancy Patricia Gutierrez, who was senator at the time and also using fabricated DAS information to falsely accuse former Senator Piedad Cordoba (Liberal Party) of being a FARC ally.

El Tuso admitted in 2011 that he also worked with the DAS to coerce photographer Jesus Antonio Villamizar to falsely claim he had images of House Representative Yidis Medina with the ELN after the lawmaker admitted she made the reelection bribe public in 2008.

Three foreign journalists were expelled from the country while covering a sugarcane cutter strike on claims they were FARC sympathizers as anyone opposing Uribe was facing increasingly fierce aggression.

Imprisoned former Senator Hernan Andrade, who was the Conservative Party chief at the time, coined the term “False Witnesses Cartel” for the first time, exactly when evidence indicated the opposite.

Meanwhile, the former president, his far-right allies and the media continued their unhinged attacks on any critic, peace advocate or human rights defender.

“Cordoba would already have been tried and convicted for high treason” in a “normal country,” former Vice-Minister of Defense Luis Guillermo Velez said in a column on political news website La Silla Vacia.

The then-senator had just been nominated for a Nobel Peace prize and Morris’ film “Impunity” was revealing how the demobilization of paramilitary organization AUC had been a hoax. Both were forced to leave the country due to death threats.

After Uribe left office in 2010, El Tiempo aligned with the former president’s successor, Santos, whose family had sold the paper in 2007.

This left only RCN, and regional newspapers like El Colombiano and La Patria to promote the former president’s far-right agenda.

After Santos approved the 2011 Victims and Land restitution bill that sought to compensate the more than 7 million victims and return land the size of Belgium that was stolen by Uribe and his allies, regional media like La Patria and El Colombiano stepped up the stigmatization of social leaders defending victims’ rights.

With only the help of the regional media, the former president retook opposition to the Victims Law and a peace process with the FARC that had begun in 2012 from Congress in 2014. 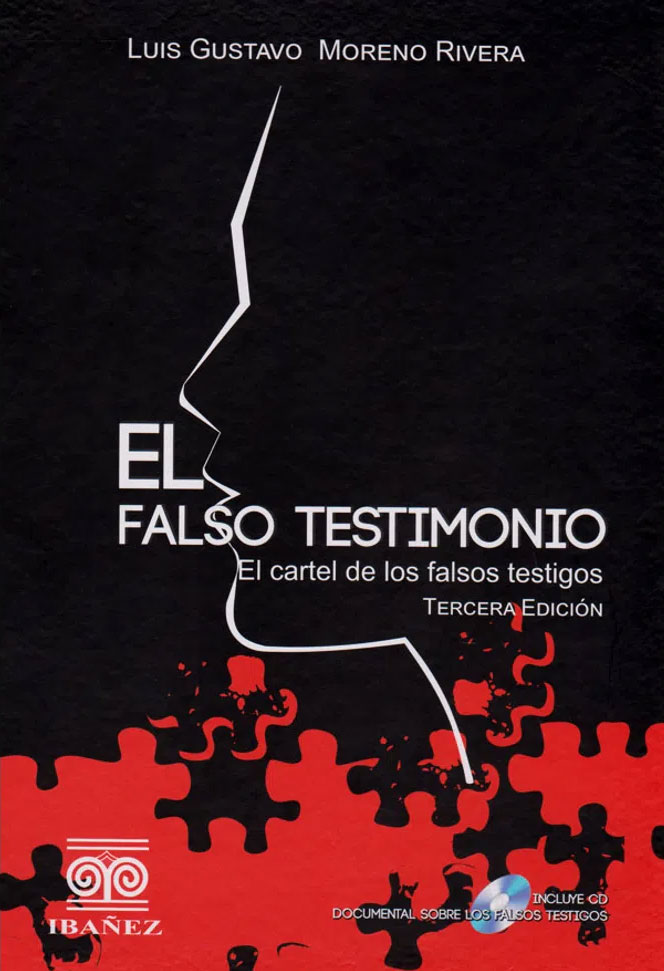 The former president filed criminal charges against opposition Senator Ivan Cepeda, claiming that Uribe’s alleged ties to the paramilitaries were made up by a “false witness cartel.”

Gustavo Moreno, a defense attorney close to the former president, published a book called “The False Testimony” in 2015 and was appointed the prosecution’s anti-corruption chief in 2016.

Moreno was arrested and extradited to the United States in 2017 for mediating bribes between investigated congressmen and Supreme Court magistrates.

The Supreme Court absolved Cepeda in 2018 and announced it would investigate Uribe for bribing witnesses to file fraudulent charges.

After Uribe’s puppet Ivan Duque was elected president in August that year, El Tiempo and Semana rallied behind the government again.

Semana hired Davila and Hernandez who resumed stigmatizing critics and smearing the Supreme Court, but to no avail as the media are in crisis.

Uribe is under house arrest and with one foot in prison. The former president’s survivors have all been absolved.

El Tuso is better off than anyone; the convicted narco has been living in the US since finding out that even compulsive liars can get government protection if they “cooperate with justice.”