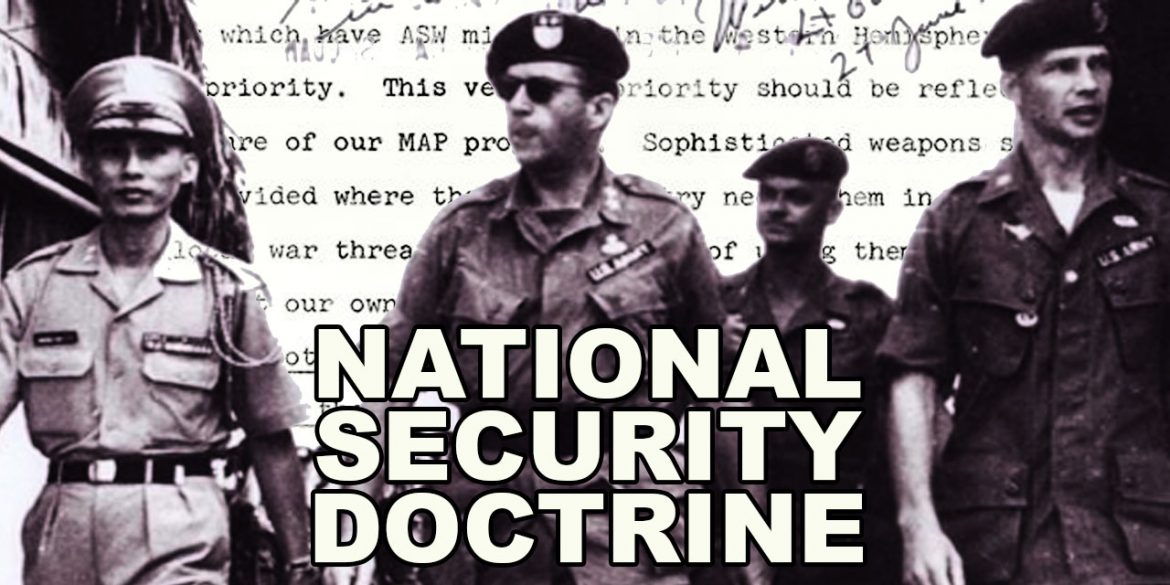 “The origin of evil” in Colombia was the “National Security Doctrine” the US military kicked off in the early 1960’s and degenerated over decades, according to a Medellin Court.

This National Security Doctrine was a military doctrine that began developing after 1947 and initially was no more than a low-priority effort to secure “international security” in the hemisphere where US hegemony and corporate interests were pretty much unchallenged with the exception of Guatemala.

What is known in Latin America as the National Security Doctrine [is] not defense against an external enemy, but a way to make the military establishment the masters of the game [with] the right to combat the internal enemy…: it is the right to fight and to exterminate social workers, trade unionists, men and women who are not supportive of the establishment, and who are assumed to be communist extremists. And this could mean anyone, including human rights activists such as myself.

The 1962 Cuban Missile crisis changed the priorities and then-President John F. Kennedy agreed to active participation in  “the methods of Heinrich Himmler’s extermination squads” to quell any perceived communist threat.

This decision came four years after the end of “La Violencia” while the authority of Bogota’s elite was challenged by what were initially liberal enclaves increasingly shifted to socialist communes rejecting national authority.

Kennedy sent the commander of the US Army Special Warfare Center, Lieutenant General William P. Yarborough to Colombia, where he proposed to crack down on the communes that refused to recognize the authority of the duopoly of the Liberal Party and the Conservative Party.

[A] concerted country team effort should be made now to select civilian and military personnel for clandestine training in resistance operations in case they are needed later. This should be done with a view toward development of a civil and military structure for exploitation in the event the Colombian internal security system deteriorates further. This structure should be used to pressure toward reforms known to be needed, perform counter-agent and counter-propaganda functions and as necessary execute paramilitary, sabotage and/or terrorist activities against known communist proponents. It should be backed by the United States.

Yarborough’s encouragement of a hard-core crackdown of anything challenging the “National Front” government in Bogota quickly escalated.

President Guillermo Leon Valencia ordered an attack on the commune of “bandits” in the southern Tolima province, but failed and the farmers formed the FARC. In the central Santander province, the ELN decide to take the attack. The armed conflict had begun.

To counter the newly founded rebel group, Valencia promoted the use of paramilitary groups to support the military in a 1965 decree that said “all Colombians, men and women not included in the call for compulsory military service, may be used by the Government in activities and work that contribute to the restoration of normalcy.”

Yarborough saw how Valencia was unable to curb the rebel movements and insisted the  US military would remain actively involvement until he was transferred in 1968.

The Colombian military began considering any kind of dissent against the increasingly authoritarian rule communist, which made anyone challenging authority “an internal enemy,” only fueling paranoia and polarization.

The growing force of the FARC and the ELN in the countryside triggered the formation of paramilitary groups in the northern Magdalena Medio region at the end of that century.

The army even founded its own terrorist unit and what would later become the Medellin Cartel became involved in 1981, making the mess was complete.

The narco’s death squad, the MAS, became a model for the paramilitary groups originally coined by Yarborough, but with with an explicit criminal interest.

After the FARC also got involved in drug trafficking the next year, all involved parties had become evil.