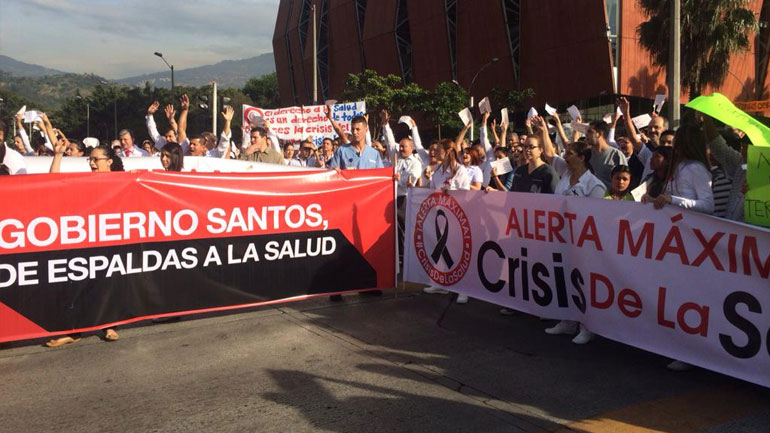 Health workers protest to demand $4B for Colombia’s suffering hospitals

Colombian health workers on Wednesday carried out their second protest this month to demand solutions for a corruption-spurred health care crisis that has left tens of thousands of workers without pay.

Hundreds of Colombia’s hospitals are on the brink of bankruptcy after more than $4.5 billion in health care funds were embezzled or misappropriated by health care intermediaries called EPSs.

The government last week promised a $540 million capital injection in the sector, but according to the protesters this is not enough.

“Not only do we seek the resources to pay the debts for public and private hospitals in the country, but a structural reform to Colombia’s health system is required,” a spokesman from the Association of Social Enterprises ACESA in Medellin told media.

The Medellin University Hospital has been among the hardest hit with unpaid EPS debts of almost $109 million, causing them to cut beds in pediatrics and reduce operating room hours.

The city’s San Vicente Hospital has been unable to pay utility bills of $80,000 and has sought the assistance of creditors to enable normal functioning of the hospital.

The first protest of this kind this month took place on July 22, when employees nationwide conducted protests, asking the government for over $4 billion on top of the $540 million promised by the government the day before.

Moreover, the government promised a similar capital injection last year, but according to the protesters this promised aid never reached the hospitals.

“We know the solution and the cure, which in this case is money,” reported the Managing Director of Medellin’s Pablon Tobon Uribe Hospital and spokesmen for the group “Somos 14+1”. This group represents some 21,000 employees, suffering the crisis currently faced by the 14 major hospitals in the country’s second largest city.

All state funding in the health sector — also the capital injections — is managed through the health care intermediaries, the EPS, who allocate funds to clinics, it is however these parties that have been accused of embezzlement and the misappropriation of over $4.5 billion in funds, some might argue that the government is simply turning the tap higher here.

The victims of this scandal are the public hospitals, the employees and ordinary Colombians, some of whom have literally died in hospital waiting rooms.