Colombia’s largest health intermediary is continuing to embezzle hundreds of millions of dollars in public money despite a government take-over of the company due to similar fraud, a Colombian senator said Monday.

Jorge Robledo, a leading opposition senator in Colombia’s congress, accused the administration of President Juan Manuel Santos of maintaining corrupt management practices of health intermediary SaludCoop by continuing to use public funds on payments he says are banned by law.

In an interview with Colombia Reports, the senator — based on documents by the National Health Inspector — estimated at least $343 million has been used by the company to make payments on bank loans, purchases and leasing contracts. 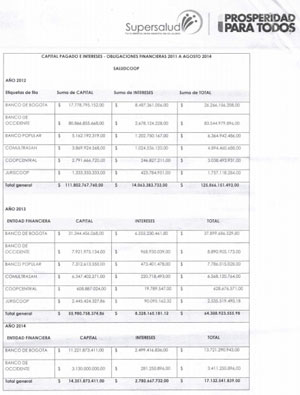 These payments are illegal, as the public funds are supposed to go toward healthcare for Colombians.

The company was nationalized in 2011 and its directors sentenced to pay more than $700 million after fiscal authorities found public money had gone into investments that included golf tournaments abroad.

“The problem is that since SaludCoop has been put under public control, it presents the same irregularities as under its previous administrators,” said Robledo.

Quirky investment schemes like those of SaludCoop have already cost Colombian taxpayers billions of dollars, according to Colombian media.

In a 2013 ruling, Former Comptroller General Sandra Morelli sentenced the board of directors to return $726 million they had embezzled.

However, Morelli fled the country earlier this year after the nation’s Prosecutor General, Eduardo Montealegre, had begun investigating her for alleged irregularities while in office.

What complicates the matter is that the country’s chief prosecutor was SaludCoop’s legal adviser between 2004 and 2011, and thus complicit in the fraud, according to Morelli. When the company was put under government control, Montealegre was hired by the Santos administration on a contract basis and elected by Congress to become Prosecutor General in 2012.

“The SaludCoop of President Santos appears much like the SaludCoop before the intervention. Despite the prohibition of the National Health Inspector paying accounts that are not permitted to be paid with healthcare funds, and which become part of the wealth of Saludcoop, the payments continue,” Robledo said.

While a case of such massive alleged government corruption could be an important story, the senator was critical of national Colombian media for largely failing to report on it, implying government pressure on the press.

“What’s surprising is that something of such importance and seriousness has passed in silence in the media. It is evident that there has been a lot of pressure on the media from [the president’s office] to not cover this topic,” he said.

Robledo also accused the Santos administration of being complicit with the health care company administrators in the illegal use of public funds to avoid paying the sanctions imposed on it by Colombia’s fiscal watchdog.

“The auditor of SaludCoop and the government contracted lawyers for $5.3 million — also from resources intended for health — to overthrow the sanction the Comptroller General had imposed on the company,” he said.

While the company was still privately owned, the Comptroller’s Office sentenced the ex-president and the former directive board to $726 million fine to compensate the fraudulent use of public funds.

According to investigations, Saludcoop was investing Colombia’s social health funds in foreign countries such as Panama, Chile and even Afghanistan. They also included funding golf tournaments and sport teams.

Corruption cases like that of SaludCoop have plunged the country’s healthcare system in an economic abyss, threanening the continuity of hundreds of hospitals.

MORE: More than 500 hospitals in Colombia ‘close to bankruptcy’