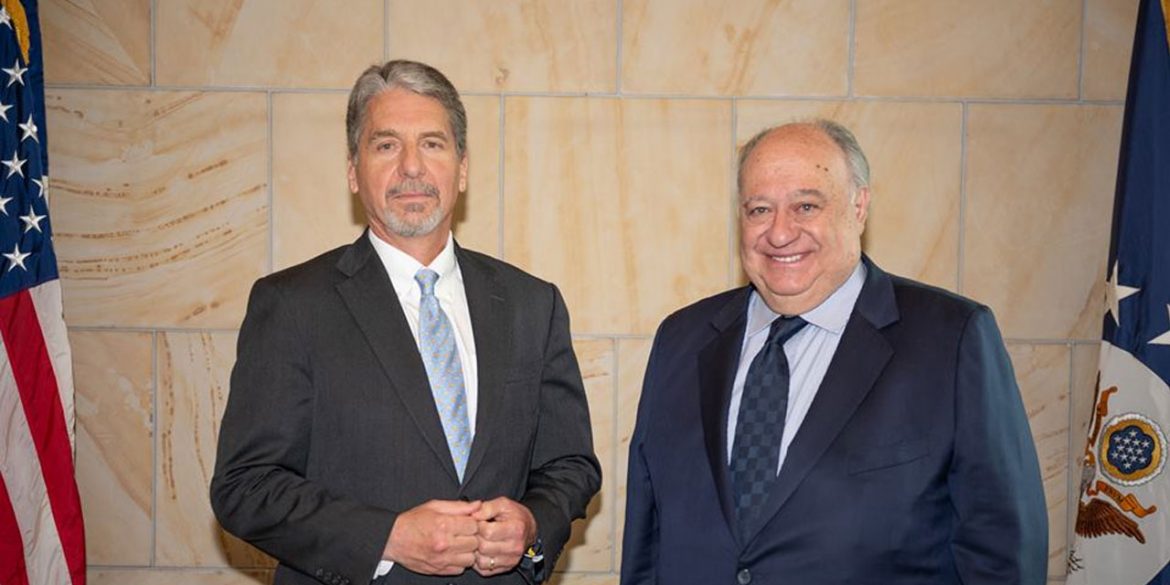 US ambassador meets with Juan Guaido's representative in Bogota on the day Colombian officials said they began planning the Venezuelan opposition outing with drug traffickers. (Image: US Embassy)
News

The trip of Venezuela’s opposition leader Juan Guaido to Colombia in February was only possible with the prior approval of drug traffickers, according to public television network Canal Uno.

For hours, Colombian authorities did not know how to talk their way out of the scandal caused by the images of Guaido posing with leaders of drug trafficking organization “Los Rastrojos” at some seven kilometers from the border.

The White House and the US embassy in Bogota have not said anything about the narcos that were involved in the operation to force trucks laden with American aid through the border.

Noticias Uno revealed that the images with “Brother” and “El Menor” were taken in an area known as Guaramito in Venezuela. From there, Guaido got into the narco’s Toyota and the three drove to the border bridge at the village of Agua Clara, a major drug trafficking route controlled by the Rastrojos.

At the bridge, Guaido was received by, among others, two of President Ivan Duque’s bodyguards and local Conservative Party politician, Juan Felipe Corzo.

Protected by Duque’s bodyguards, the Venezuelan opposition leader crossed the bridge on foot after which he got into another car and was driven to the local football field where the president’s helicopter was waiting for him.

“He got into one of our cars and we drove to one of the helicopters made available by the President of the Republic, Ivan Duque,” Corzo told media.

El Tiempo showed images demonstrating that Duque had even arranged a red carpet and 12 presidential guards to give the Venezuelan opposition leader a presidential welcome at the football field.

By the time Guaido reached Duque’s helicopter almost a dozen bodyguards had taken charge of his security, according to video footage.

The Venezuelan opposition leader boarded Duque’s private helicopter and took off to Cucuta, the border city some 30 kilometers south of Agua Clara.

At an undisclosed location, Guaido met up with Duque and his Chilean counterpart Sebastian Piñera, and the three arrived by car at a concert that was organized by Richard Branson, supposedly to collect money for Venezuelan aid.

The next day, the Venezuelan opposition leader led a failed attempt to force American aid over the border that, according to Colombian authorities, left 280 people injured.

How to talk you way out of this

The councilman said that the operation was arranged with the opposition leader’s personal assistant, Roberto Marrero, on February 20,  the day that US ambassador Kevin Whitaker met with Guaido’s representative in Bogota, Humberto Calderon, to prepare the failed February 23 operation.

“There was no support from illegal armed groups. We coordinated everything with Marrero from Cucuta, When Guaido arrived at Agua Clara we went to pick him up with the police, a security team from the presidential palace and members of the Venezuelan opposition,” Corzo told El Tiempo.

Guaido, who previously claimed members of the Venezuelan military helped him cross the border, said he was taking photos with all kinds of people that day, and claimed that the photos were made public by Diosdado Cabello, a Venezuelan politician close to Maduro. He lied.

The photos were made public by Colombian sociologist Wilfredo Cañizares, who has been investigating crime in the region for 20 years.

“it is impossible there that a commission of foreigners enter our country through an illegal passage without there having been presence of paramilitaries or an agreement with the group that controls the area, the Rastrojos,” Cañizares told Noticias Uno.

The fact that the Rastrojos control this major drug trafficking route has been known for years. The group’s founder, “Jabon,” fled to Venezuela in 2004 amid a war with “Don Diego,” another former capo of the Norte del Valle Cartel, and created a drug trafficking corridor from the Catatumbo region in Colombia to the state of Zulia in Venezuela.

“Those estates at the banks of the Grita river are drug traffickers’ estates. It’s an export route for drugs they have strictly controlled since 2012,” stressed Cañizares.

According to Canal Uno, this is common knowledge in the region and known to authorities on both sides of the border. The US government has known this since at least before 2018, according to the website of the Justice Department.

US Vice-President Mike Pence should have known this when he surprisingly announced a trip to Bogota one day after Colombian officials began planning Guaido’s border adventure with the narcos and met with Guaido three days after the border crossing.

The White House and the US embassy in Bogota have remained quiet about their apparent collusion with Colombian organized crime groups.

The question is whether the administration of Donald Trump knew the US government was again working with narcos or was taken for a ride by their South American allies.