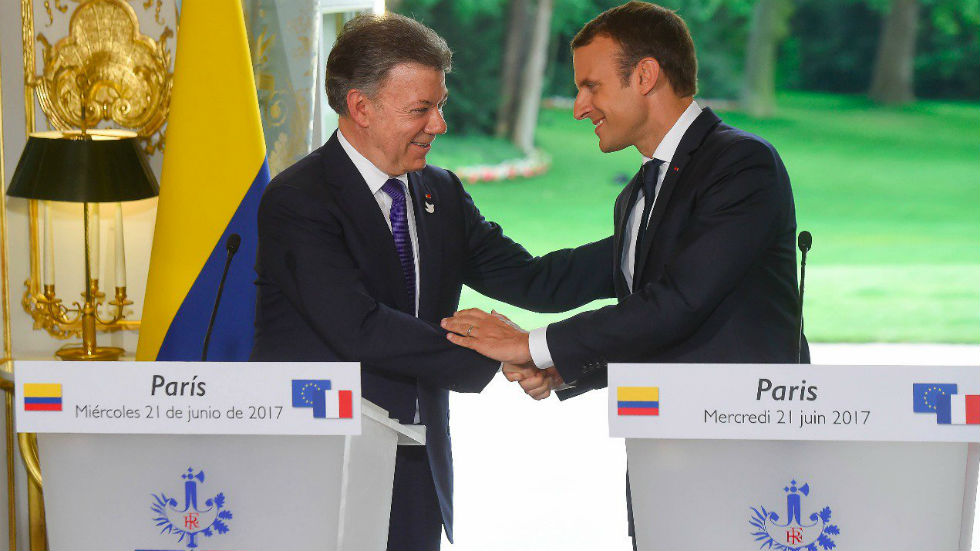 Colombia’s president Juan Manuel Santos received the unwavering support of his French counterpart for the peace process with the Marxist-inspired FARC rebels during meeting in Paris on Wednesday.

Emmanuel Macron reiterated that France will continue to support the implementation of a peace accord between the government and the leftist FARC rebels just days after a deadly bomb attack in Bogota, which killed three people, including a French citizen.

“This does not affect France’s full support and its full availability for the peace of Colombia,” said Macron, adding that his government will continue to support the country because “we all know the obstacles involved in peace.”

After what has been a turbulent few days for the South American country, President Santos reiterated that Colombia will not bow to terrorism.

“There are no bombs that bend the will of a free and united people,” said the head of State adding that “terrorism knows no boundaries, but it is fought with temperance, resilience and forcefulness.”

France has been one of the major supporters of Colombia’s peace process with former president Francois Hollande becoming the first French head of state to visit the Andean nation in almost 30 years in January of this year.

A positive meeting with the French president during which they both paid tributes to the victims of the Bogota shopping center bombing will come as a relief to Santos with the Saturday attack threatening to undermine the political situation.

In a joint press conference, both dignitaries signed a declaration of intention that agreed to “the development of the cooperation of the French Development Agency in Colombia in support of the implementation of the peace accords,” which may result in a loan of €200 million for rural development from the European country.

In addition to the peace process, the two leaders discussed climate change with Macron insisting that the two countries’ developing working relationship must be extended to environmental issues.

“Colombia is the second most bio-diverse country in the world for which we want to support them and it is one of the pivotal points for France to develop jointly.”

Santos for his part declared that Colombia’s desire to work towards the improvement of the global environment was reflected in Congress’ decision to ratify the Paris Agreement on Climate Change last week.

The Andean nation promised to reduce emissions of greenhouse gases by 20% by 2020 as part of the agreement.

Macron and his wife Brigitte greeted Santos in the Elysee courtyard for the first of a series of meetings with French officials during which the issues of trade and climate change will be tackled.

Santos will meet with the French Prime Minister, Edouard Philippe, and the Secretary General of the Organization for Economic Co-operation and Development (OECD), Angel Gurria in the coming days.

He will also speak at an economic forum, meet with United Nations’ cultural organisation UNESCO as well as the leaders of some 20 French companies before the conclusion of his visit.