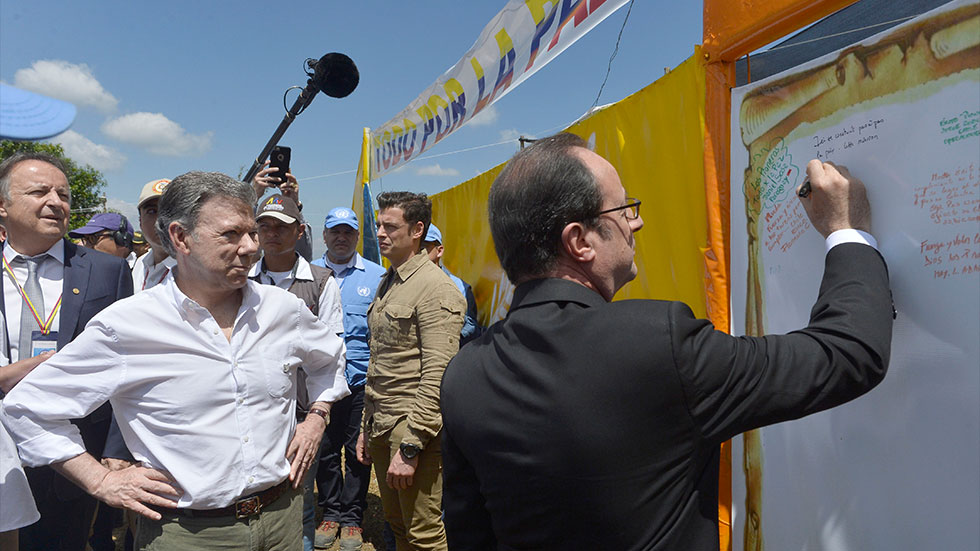 French President François Hollande met with leaders of Colombia’s largest rebel movement Tuesday in an area where guerrillas will soon begin turning over weapons as part of a historic peace deal.

Hollande, accompanied by President Juan Manuel Santos, visited a rural camp in southern Colombia run by the United Nations. While there, Santos and top Colombian officials explained how some 7,000 guerrillas belonging to the Revolutionary Armed Forces of Colombia are supposed to disarm over the coming months and begin their transition back to civilian life.

The visit, the first to Colombia by a French head of state in 28 years, included a private meeting with representatives of the FARC, including a member of the group’s ruling secretariat whose nom de guerre is Pablo Catatumbo.

Hollande expressed support for the peace deal, calling it a model for resolving conflicts around the world.

“The disarming and demobilization is not reversible,” Hollande told journalists.

More than 350 United Nations observers from several Latin American nations are spread out at 26 locations across Colombia preparing for the FARC’s demobilization.

Holande’s visit to the rural camp has not been without controversy.

Former President Alvaro Uribe, who led the campaign that defeated the original accord in a nationwide referendum, accused Hollande of “supporting the impunity of terrorists” by meeting with the FARC.

“Many of us feel rejection toward the successor of Napoleon and De Gaulle for his visit to the FARC,” Uribe wrote in an open letter this week.