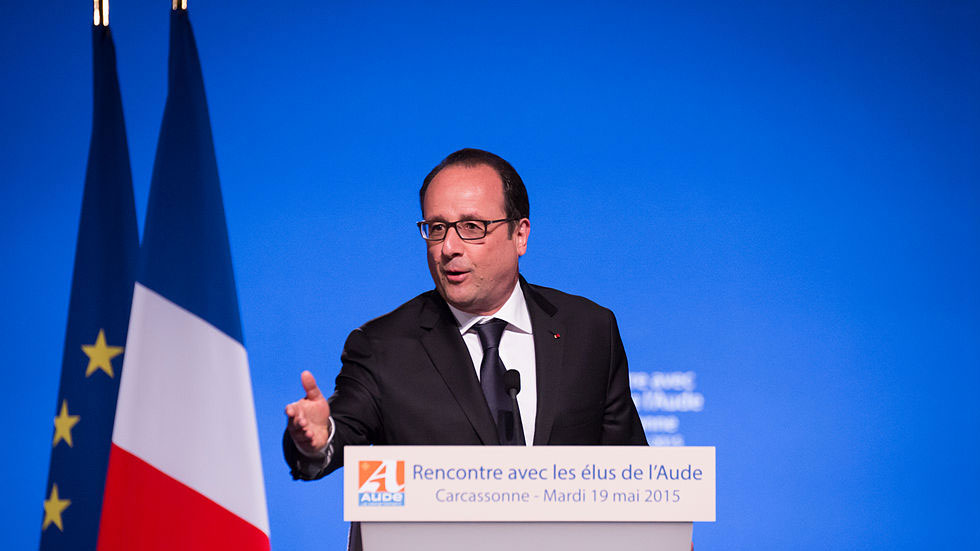 The President of France arrived in Colombia on Sunday in a show of support for the ongoing peace process between the FARC rebels and the government amid a looming diplomatic crisis with the US.

French President Francois Hollande’s arrival in the capital Bogota is part of a 5-day tour of Latin America during which he will visit FARC demobilization camps in the southwestern Cauca province in a bid to reiterate international support for the process as a whole.

Colombia’s peace process is currently at a delicate stage whereby the FARC guerrillas are laying down their arms, child soldiers are due to be removed from their ranks and reintegrated into society while a transitional justice system is being set up to try perpetrators for war crimes, all of which is under international supervision.

Despite ongoing opposition from the Democratic Center led by former President Alvaro Uribe, who slated the visit of the leader of the French Socialist Party on his Twitter account, Colombia’s Minister for Foreign Affairs praised the visit as “logical… reasonable and normal,” reported newspaper El Heraldo.

Cooperation has been a great help for Colombia and it seems to us more than logical that they want to see how the implementation begins, what these demobilization areas are, how the tripartite mechanism (to verify the ceasefire) works, how is the UN mission in those areas. We think it is reasonable and normal that they want to see it.”

“Pastor Alape,” a member of the FARC leadership, told a press conference on Sunday that the visit by the French president represents “that the international community is entering into a commitment to the peace process,” reported El Tiempo newspaper.

The French government has historically been a close observer of the decades-long Colombian conflict, particularly since French-Colombian politician Ingrid Betancourt was kidnapped and spent six years in the jungle in FARC captivity.

Betancourt, who had been married to a French diplomat and was running for Colombian president at the time of her kidnapping, was rescued in a secret 2008 operation coordinated by the French, American and Colombian governments to the jubilation of the Colombian, American and French public.

President Hollande’s visit is the first of a French president to Colombia in 28 years since François Mitterrand met in Bogota with President Virgilio Barco in 1989 to express his support for the struggle against drug trafficking in that period.

The visit of the French president comes amid ongoing uncertainty regarding US support of the peace process since the inauguration of Donald Trump as President.

The administration of Trump’s predecessor Barack Obama had pledged a package of $450 million in aid to help implement the peace agreement but since the Republican president took the reigns last Friday, the provision of the funding has been cast into doubt.

Trump’s pick to be Secretary of State has refused to pledge support for Colombia’s peace process, saying he first needs to “review the details” before he could “determine the extent” of United States backing.

The new US president himself repeatedly stated throughout his election campaign that all foreign policy will be judged by its direct benefits to the US. In his quest for budget savings, the $450 million for Colombia may be an attractive target for reduction in spite of the consequences for stability in the region.

Colombia’s Defense Minister, partly in charge of the already delicate peace process in the country, admitted that following Trump’s inauguration,  he expected a “drastic change in the rules of the game.”