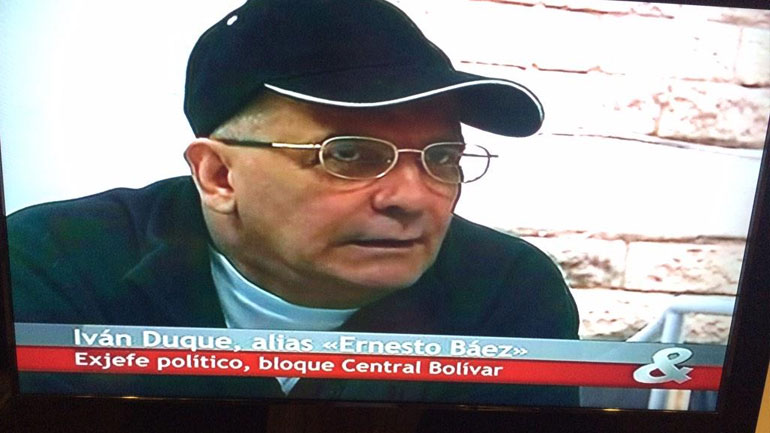 One of the leaders of the now-defunct AUC is allowed to leave prison after a judge ruled that paramilitary chief “Ernesto Baez” complied with his end of a deal that granted him a maximum penalty of eight years in exchange for victim reparation and the confession of crimes.

Baez, whose real name is Ivan Roberto Duque, was considered one of the ideological frontmen of the AUC, a right-wing paramilitary group that was officially formed in 1997 as a private security force to protect private interests against guerrilla attacks or kidnapping attempts.

By the time the group demobilized between 2003 and 2006, it had become the main victimizer in Colombia’s armed conflict and was deeply involved in drug trafficking.

Baez, a law graduate, was the commander of the AUC’s Central Bolivar Bloc, a paramilitary unit active in Colombia’s iconic coffee region that admittedly left 14,000 victims through mass displacement, massacres and the recruitment of child soldiers.

The AUC chief had been involved in paramilitary activity since the 1980s and has been highly politically active since.

While other paramilitary chiefs would focus on drug trafficking, Baez joined the AUC for political reasons; He was an outspoken anti-communist and seeking a military way to curb the power of Marxist guerrilla groups like the FARC and ELN that were terrorizing the countryside in the 1990s.

Baez ended up sentenced for his participation in numerous political killings and one massacre.

The former leader of the Central Bolivar Bloc is one of the first paramilitary commanders to be released from prison.

Another important leader, “El Aleman,” heard last week he would be released soon.

The first paramilitary commander to be released, the mid-level “Sancocho,” was assassinated only weeks after leaving prison earlier this year.

In spite of the seriousness of their crimes, paramilitaries that demobilized after a peace agreement with the administration of former President Alvaro Uribe were allowed a maximum penalty of eight years in prison on the condition they collaborated with justice and compensated their victims.

Fourteen of Baez’ fellow paramilitary commanders were extradited to the United States in 2008 as extensive ties between the AUC and Colombia’s political establishment became clear.

The extradition was rejected by the Supreme Court and the Prosecutor General, and fiercely opposed by victims who demanded the paramilitary chiefs to respond to Colombian human rights violation charges rather than US drug trafficking charges.