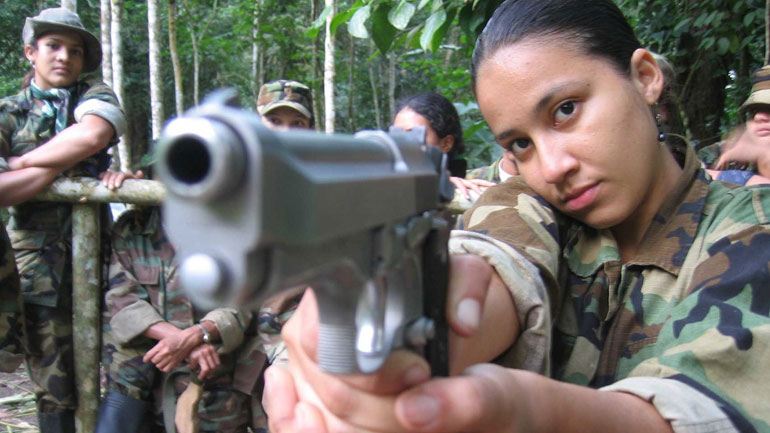 Colombia’s largest rebel group FARC said Wednesday insisted in its refusal to surrender its weapons to the government, but planted the idea to leave these weapons with a foreign government or even in a museum.

In an interview with US television network Univision, the FARC’s chief negotiator in ongoing peace talks with the government, “Ivan Marquez,” reiterated the FARC’s refusal to hand their weapons to the state the rebel group has been fighting for more than 50 years.

In any possible scenario, the Marquez said that they will abandon their arms.

“The FARC is not going to use them in politics. We are going to put them far away,” said Marquez, who has been leading the rebels’ peace negotiation team since they began in November 2012.

The guerrilla group refuses to hand their weapons to the government “because for the FARC they represent a very important symbol of resistance” against the state they hope to make peace with within six months.

What to do with the FARC’s armory is currently being negotiated by the rebels and the administration of President Juan Manuel Santos as part of “End of Conflict,” together with “Victims” the final point on the agenda of the peace talks held in Havana, Cuba.

“Surely we will think of what to physically do with the weapons. For example, you could think of the construction of a museum that reminds us that what we have gone through may never happen again,” Marquez told Univision.

The government has demanded a deal on the FARC’s surrendering of weapons as a condition to agree to a bilateral ceasefire, but disarmament is a thorny subject for the FARC itself.

FARC must agree to transitional justice and surrendering weapons before truce: Govt

When the guerrillas took part in the formation of a political party, the Patriotic Union, after peace talks with the administration of President Belisario Betancur, rogue state and paramilitary forces began a bloody extermination campaign of unarmed leftist political activists that left thousands, including two presidential candidates, dead.

For this reason, the guerrillas have previously urged the dismantling of existing paramilitary structures to prevent another bloodbath.

Paramilitary umbrella organization AUC demobilized officially between 2003 and 2006, but members of this group have since formed new groups and have threatened to assassinate demobilized FARC guerrillas, allegedly in ongoing conjunction with rogue elements within the state.

The FARC took up weapons in 1964 and has been trying to overthrow the Colombian government since then.

If the current peace talks are successful, the group will become an unarmed political group, leaving behind an armed conflict that has killed more than 265,000 Colombians and left more than 6 million displaced.