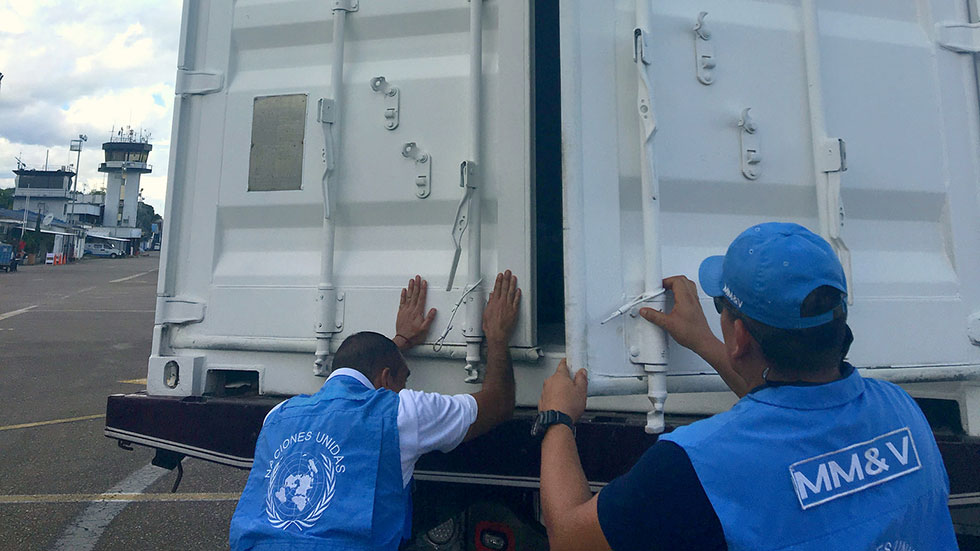 The United Nations reported it had removed more than 8,000 arms and 22,000 kilograms of explosives on the final day of disarmament of Colombia’s demobilized rebel group FARC.

“Today we are finalizing a removal process of all the arms that were in FARC [demobilization] camps as well as gathered weapons during the process of supervising [hidden] weapons caches,” The UN’s mission chief in Colombia, Jean Arnault, told media in the province of La Guajira where the last container carrying FARC weapons ceremonially was removed.

According to Arnault, peace observers had received the coordinates of 873 weapons caches hidden in Colombia’s remote jungles and mountains.

The UN was able to remove 510 of these weapons caches, leaving the remaining 363 caches for the military to pick up now the initial peace observation mandate has come to an end.

The ceremony was also attended by President Juan Manuel Santos who said that “today the construction of a new country begins.”

Top commanders of the now-disarmed FARC were also present in the municipality of Fonseca.

The UN’s removal of the last container means the end of the first phase of on going peace process; the demobilization and disarmament of the rebel group that has violently opposed the State since 1964.

The approximately 7,000 guerrillas and 4,000 militia members will now proceed with their reintegration process while a transitional justice system is set up to seek justice for the tens of thousands of war crimes committed during the 52-year-long conflict.

The FARC agreed to end their armed conflict with the state after being granted temporary seats in Congress and the Santos administration agreed to carry out far-stretching political reforms aimed at reducing corruption and political exclusion of minorities.

All warring parties will have to face justice and repair victims if convicted of war crimes.