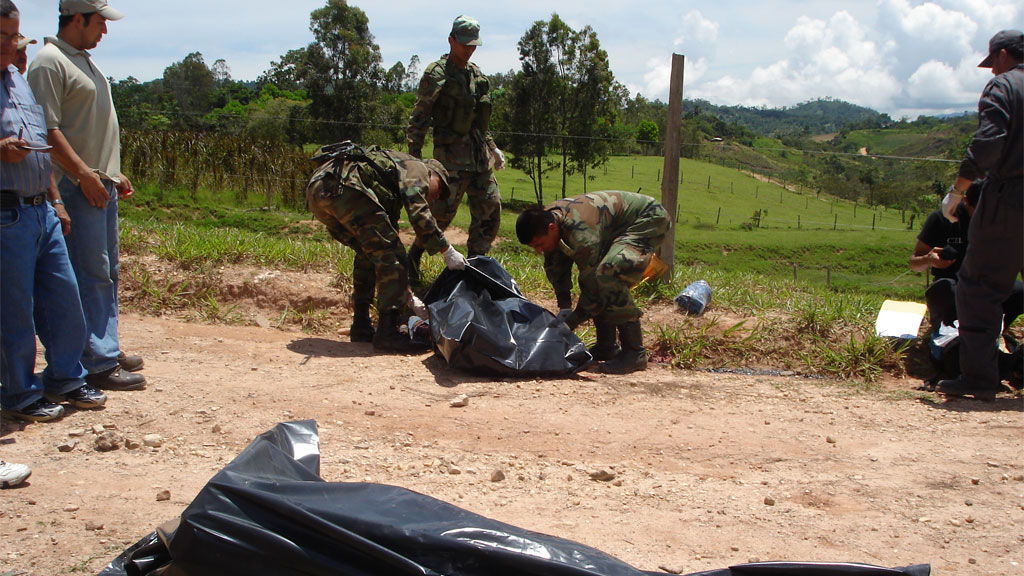 According to a press release, five members of a local army battalion were killed and another five injured in combat with members of the FARC’s 6th front and the Teofilo Forero elite unit in rebel-controlled territory in the southwest of Colombia.

One more soldier is missing in action and feared to have been taken prisoner by the guerrillas.

The combat took place in Santander de Quilichao, a town in the north of the southwestern Cauca state and allegedly between the army and “Oscar,” the alleged local mid-level commander of the 6th front.

The same FARC unit had earlier that day blown up the Panamerican highway that connects Colombia to the rest of South America only miles south of where it killed the soldiers.

Additionally, alleged FARC rebels left the Pacific port city of Buenaventura without electricity after blowing up a key electricity tower on Thursday.

While speaking before a group of soldiers, the minister later said that “it hurts me every time they kill one of you boys, you are the ones constructing Colombia’s progress.”

Rather than condemning the attack, President Juan Manuel Santos said he “regretted the death in combat of five of our nation’s heroes, soldiers of our army.”

The president assumed a more conciliatory tone in the wake of a recent agreement with the rebels to deescalate the conflict that had led to a temporary suspension in November when the FARC captured an army general.

“This is the war I want to end,” said Santos.

Nevertheless, Santos has so far refused to agree to a bilateral ceasefire amid fears the rebels might seek benefit from military leniency.

The president also refused to meet the FARC’s conditions for the unilateral ceasefire and insisted the government itself would monitor the rebels’ compliance while saying that “the government will continue to comply with it undeniable constitutional duty to guarantee and protect the rights of Colombians.”

Santos has said he is only willing to cease military actions against the guerrillas in the event a peace agreement is signed. The president also refused to allow international observers to monitor the compliance of the FARC to their announced ceasefire.

According to Santos, the FARC’s announced ceasefire was a “thorny rose” because of the imposed conditions. “So what we do is take off the thorns and keep the rose they sent us.”

FARC negotiation leader “Ivan Marquez” went as far as to respond to Santos with a poem by Cuban writer Jose Mart reading “Thistle nor thorn do I give: For him, too, I have a white rose.

The FARC, equally conciliatory in tone, said that “we see the response of Santos as a way to come closer to the issue … It should be noted that our decision is not a given rose full of thorns, but a gesture full of humanity in response to the widespread clamor of the conflict victims and national expectations.

Instead of international observers, the FARC have asked local organization to monitor the organization’s compliance to the ceasefire.

While conservative opposition forces have long demanded a unilateral ceasefire by the FARC, victims of the conflict on repeated occasions have asked both warring parties to agree on a bilateral ceasefire for the duration of the talks.

Following a suspension in talks in November, the two parties agrees to negotiate the “de-escalation of conflict” and have tried to temper mutual accusations in public.

The FARC and the government have been engaged in formal peace talks since November 2012 to seek a negotiated end to 50 years of violence between state and rebels in an armed conflict that cost the lives of more than 900 thousand Colombians and victimized more than 13% of the country’s population.

While agreeing to negotiate an end of the conflict, the warring parties have been unable to agree on a bilateral ceasefire amid government fears the rebels might use military leniency to regroup.

According to an agreement made between the parties before the talks, a bilateral ceasefire will come into force once there is a peace deal.