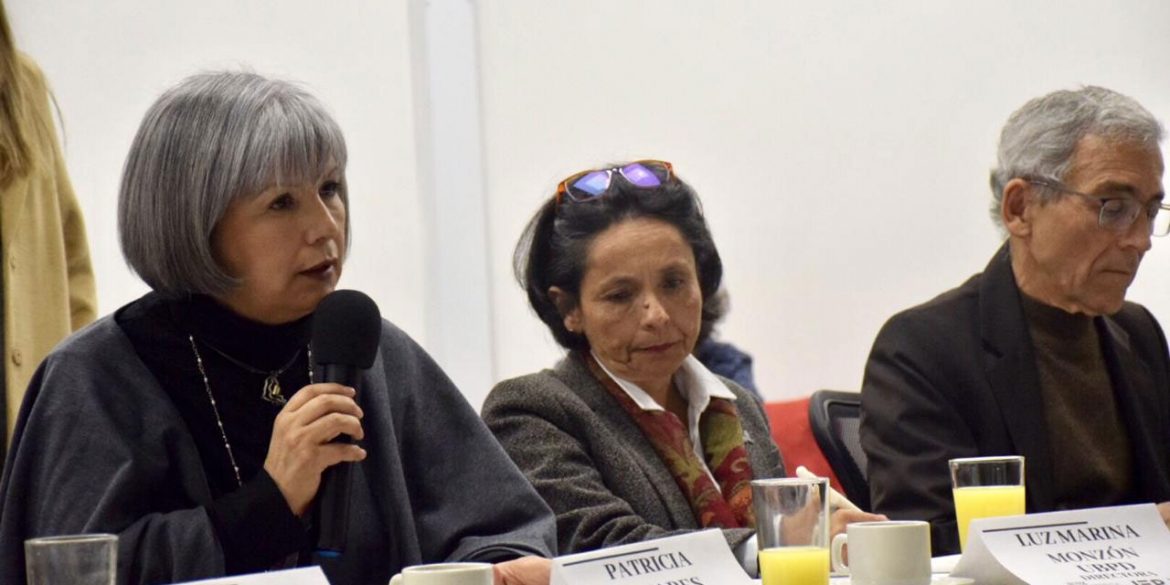 JEP Patricia Linares (L) talks to the press after meeting with the ambassadors. (Image: JEP)
War and peace

The presidents of Colombia’s war crimes tribunal, truth commission and search unit for disappeared persons met with foreign ambassadors on Tuesday to warn them that budgets cuts threaten their work.

The meeting came a day after President Ivan Duque met with the Eamon Gilmore, the European Union’s Special Envoy for the Peace of Colombia, to discuss progress of the peace process with the FARC as part of the top EU official’s five-day visit to the country.

Gilmore said that the European Union “remains very calm with the commitment of President Duque and his government to implement the agreements.”

This sentiment was not shared by the presidents of the transitional justice system who told the foreign ambassadors that the drastic budget cuts will make much of their work impossible.

The Finance Ministry on Friday informed the war crimes tribunal JEP, the truth commission and the search unit for disappeared persons about the drastic budget cut after months of threatening to do so.

The heads of the three departments told press and the ambassadors that the cuts drastically undermine their ability to provide truth and justice to the country’s more than 8.5 victims.

We understand the country’s fiscal situation, but we did not expect such a drastic reduction, in terms of the JEP we had assigned 90 billion  pesos ($28 million) for 2019, for 2020 we are assigned 67 billion ($21 million). This is contradictory at a time when the process is beginning to be implemented. We have a very limited time to accomplish our task and this reduction affects its fulfillment, especially in the countryside.

“For the Commission, it may mean the impossibility of continuing next year with the advance in our territorial search for peace. It is necessary that all this effort for the truth be made from the [rural] territories,” said De Roux

The director of the Unit for the Search of Disappeared Persons, which has the daunting task of locating more than 120,000 people who were forcibly disappeared or never returned after they were kidnapped by guerrillas, the budget cut forces her unit “to reduce our territorial presence and the search for people in Bogota is not done.”

According to Germany’s ambassador to Colombia, Peter Ptassek, “a deal without implementation is a dead piece of paper.”

To achieve this implementation it is necessary that the entities of the Integral System achieve close cooperation and that is what we are supporting with funds and political support. We must make sure that this system can work.

The German ambassador did not say how he and his colleagues plan to make sure Colombia’s victims receive justice despite the ongoing government actions that effectively obstruct this.