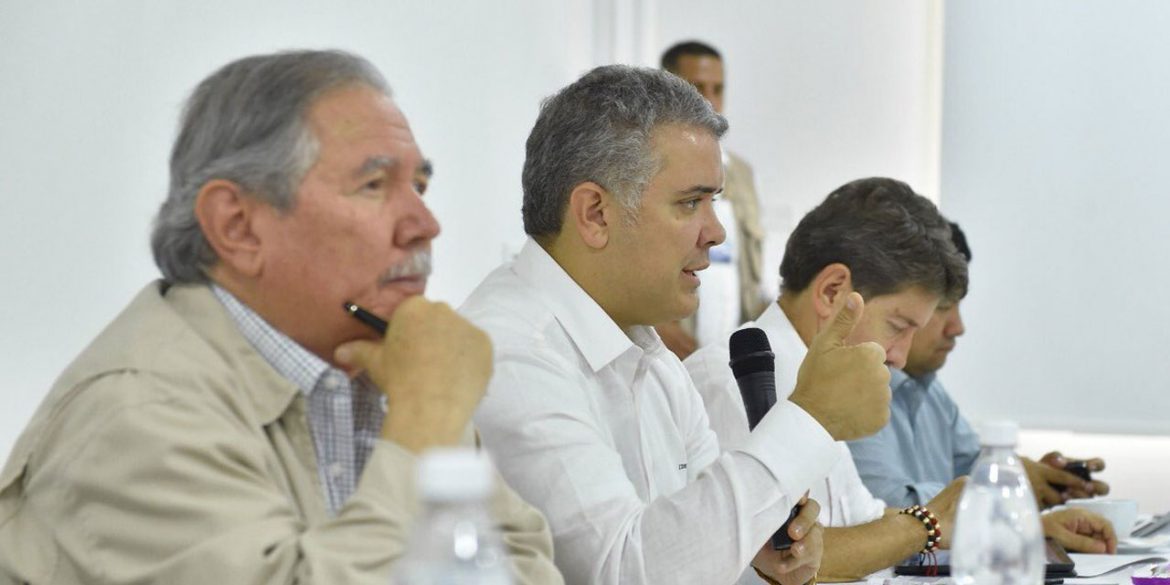 Colombia’s President Ivan Duque visited the Bajo Cauca region on Thursday to be informed about escalating violence that has seen homicides double in the long-neglected region.

Bajo Cauca has increasingly been submerged in violence after the demobilization of the FARC – who were until last year the country’s largest illegal armed group.

Duque met with Governor Luis Perez and security forces to analyze a security situation that has been spiraling out of control.

Perez had called for the emergency meeting and revealed skyrocketing homicide statistics on Wednesday.

In the municipality of Caucasia, homicides have gone up 109% so far this year. In Taraza, homicides are at 278% of what they were last year. Also in Caceres, homicides have more than doubled, according to the Governor’s Office.

A 10-year-old boy died in Caucasia on Wednesday following a grenade attack the night before.

The violence is mainly due to fighting between paramilitary group AGC, AGC splinter group Caparrapos, and guerrilla group ELN.

The situation aggravated after both local farmers and former fighters lost faith in an ongoing peace process with the FARC, who were previously the country’s largest guerrilla organization.

The killing of social leaders and demobilized FARC members spurred many guerrillas to rearm.

Duque’s vow to end a program that would help coca farmers enter the legal economy through crop substitution as part of a peace process initiated by former President Juan Manuel Santos have further increased tensions in the region, said the governor.

The promises of the National Government to support those who voluntarily eradicate illicit crops were a deception and have created a social chaos that aggressively stimulates illegality.

Both the national and provincial governments have resisted the peace process, partly because regional businesses and elites are up to their neck in war crime allegations.

Many of Antioquia’s elite families and political clans have enriched themselves from the war either through the illegal gold trade or land theft.

One of the families that own conservative local newspaper El Colombiano has been sentenced to return land that was dispossessed from local farmers by paramilitary groups.

The notoriously corrupt Antioquia Police Department and the 7th Division of the National Army seem either unwilling or unable to confront the groups that are fueled by the gold and cocaine trades, often in alliance with organized crime structures from Medellin, the provincial capital and Colombia’s informal gold trading capital.