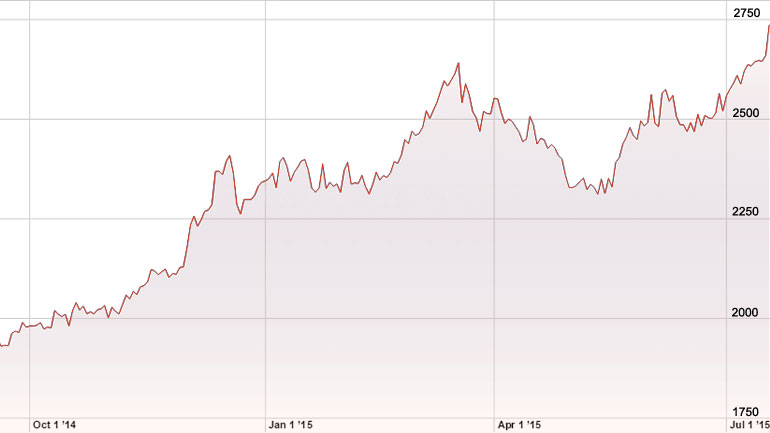 The US dollar opened trading at more than 2,723 Colombian pesos on Friday, a level not seen since 2004. According to experts, the dollar could appreciate even further and exceed a value of COP3,000 within a year.

The peso has been in free fall since the third quarter of last year when crude oil prices began dropping.

Oil makes up more than half of Colombia’s exports and 20% of government revenue.

Over the past year, the value of the dollar compared to the Colombian currency has gone up 48.5%.

Oil prices have dropped to under half the value they had a year ago.

According to the director of Colombian branch of Brazilian investment bank BTG Pactual, Armando Montenegro, the current value of the dollar “will maintain and probably even rise a little towards the end of the year.”

According to Montenegro, the dollar could reach COP2,900 before the end of the year.

The expected lifting of economic sanctions on Iran, a major oil producer, and a possible increase in US interest rates could push the Colombian currency’s value are likely to push the value of the dollar even further.

“The condition of the economy of Colombia and the rest of the world is probably going to push the dollar to COP3,000, or even COP3,250” in 2016, Montenegro was quoted as saying by economic newspaper Portafolio.

Other economists said that the dollar is likely to stabilize in the course of 2016 and could then again drop below the COP3,000 barrier.

Colombia’s central bank is also expecting the US dollar will continue to increase in value cand warned the country’s economy is going to feel the “shock” of collapsing oil prices and an increase in the price of the dollar.

“We presume that these currency exchange levels will maintain for a while. The faxct that we are talking about a persistent exchange rate, shows a new reality we will have to live with for a relatively long period of time. The economy is going to have to make an adjustment,” said Central Bank vice-president Ana Fernanda Maiguashca.

Colombia’s Finance Minister announced earlier this week that the country’s 2016 budget will grow less than the country’s inflation, forcing austerity measures to avoid a major deficit.