A pamphlet circulating in the northeast of Colombia and signed by neo-paramilitary group “Los Urabeños” urged citizens to vote for “the candidate for peace,” implying incumbent President Juan Manuel Santos, during Sunday’s first round of elections.

The pamphlet was signed by the “Autodefensas Gaitanistas de Colombia” (AGC), the official name of the Urabeños, and has been seen particularly in the region of Uraba, Antioquia.

The pamphlet reads, “We know we are an illegally armed group and that we are ready for war, but we are also aware of the fact that peace is a universal right of which we all dream.”

The communique never mentions the name of a specific candidate, but does ask citizens to “support, with their vote, the proposal of peace that the incumbent candidate has put forward.” 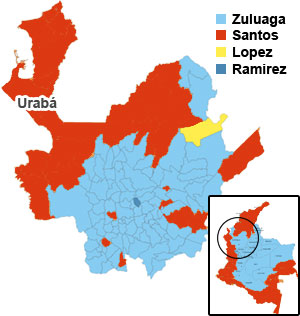 Santos won the vote in the region where the pamphlet was spread and where paramilitary groups from which the Urabeños was formed have committed numerous human rights violations over the past decades.

The Electoral Observation Mission confirmed the existence of the pamphlet on Sunday morning. Local authorities have not confirmed the pamphlet’s authenticity considering the suspicious nature of a paramilitary organization supporting the peace process with their enemy, the FARC rebel group.

However, the Urabeños in the past have expressed interest to be part of the peace process.

MORE: Neo-paramilitaries support and want to be involved in Colombia’s peace talks

Last year, the Autodefensas Gaitanistas sent out a press release that asked to be included in the peace negotiations in Cuba with the FARC. In the communique ,reported on by El Espectador magazine, they stated “the Colombian society and government should recognize that besides the rebels, we are also part of the conflict. Be conscience that while we are not part of the current negotiations, peace will continue to be a dream of the collective imagination.”

Colombia’s 2014 presidential elections have gone relatively smoothly. The complaints of the pamphlet circulating are part of 59 reports of electoral irregularities received by the Electoral Observation mission, and 48 complaints received by the Inspector General’s office.

MORE: Polls close without incident in most peaceful elections in decades