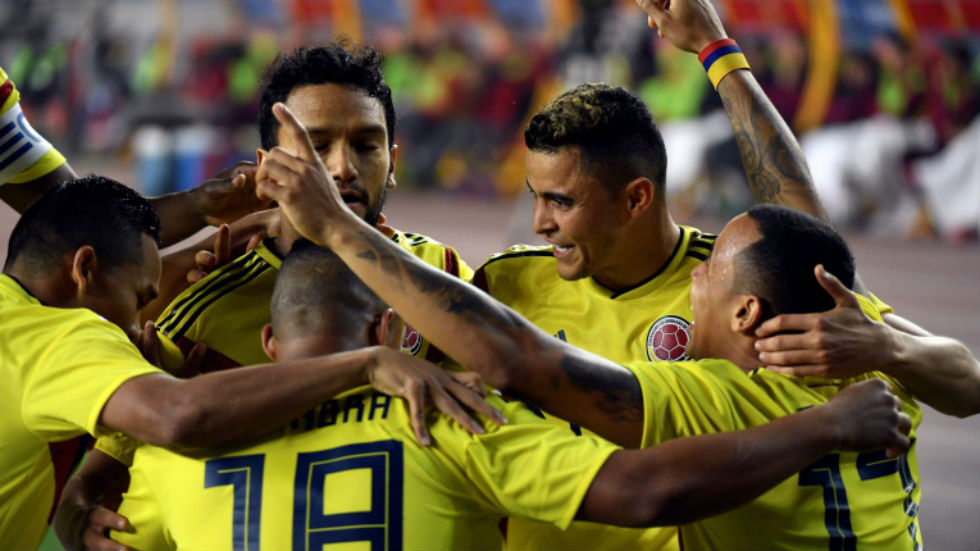 Comfortable win for Colombia in international friendly against China

Colombia’s national soccer team had a comfortable 4-0 win in an  international friendly match against China in the Chongquing stadium on Tuesday.

A brace of goals from Palmeiras striker Miguel Borja and one each Felipe Pardo and Carlos Bacca saw Jose Pekerman’s side recover from a disappointing defeat to South Korea last Friday.

Pekerman introduced a number of new faces to the starting XI as World Cup preparations continue with the likes of goalkeeper Jose Cuadrado, defenders Jeffersen Lerma and Yerry Mina and midfielders Pardo and Giovanni Moreno getting an opportunity to impress.

Colombia made a bright start to the game and opened the scoring in the 6th minute when Greece-based Felipe Pardo slotted home after good approach play from Carlos Bacca.

“Los Cafteros” dominated the proceedings in the first half but failed to add a second while China created few openings with Xiao Zhi coming closest with a shot from outside the box in the 31st minute.

China coach Marcello Lippi made a tactical change for the second half as Xiao Zhi  departed to be replaced  by Gao Lin as the home side made a more positive start after the break.

An error in the Colombian defense in the 54th minute allowed Wu Lei in to hit a powerful shot that was excellently parried by Once Caldas stopper  Jose Cuadrado.

Moments later, Colombia doubled the lead as Bacca got on the end of a tidy through ball from midfielder Carlos Sanchez to fire past Yan Junling in the Chinese goal.

Bacca turned provider in the 68th minute when he set up substitute Borja who unleashed a thunderous drive to the roof of the net to put Colombia 3-0 up.

The supposedly out of form Borja grabbed a second in the dying moments after he stroked home following incisive play from substitute Aviles Hurtado.

Without regular stars James Rodriguez, Radamel Falcao and David Ospina, Argentine coach Pekerman will be pleased with the performance as he looks to evaluate his options before next year’s World Cup.

The veteran manager was happy that his side “had the intelligence to move the ball from one place to another to  overcome the Chinese marking, and every time China tried, Colombia found more space and more goals,” as he spoke to reporters after the game.

Incidentally, Boca Juniors’ Edwin Cardona, who was involved in controversy during Friday’s game after making a racist gesture to a South Korean opponent did not appear against China. With a heavy sanction likely,  Colombia must await the fate of the midfielder.

Colombia qualified for Russia 2018 by securing a 1-1 draw with Peru last month in the final round of the CONMEBOL South American qualifying section.

The draw for the group stages of the world’s most prestigious football showpiece will take place on December 2.