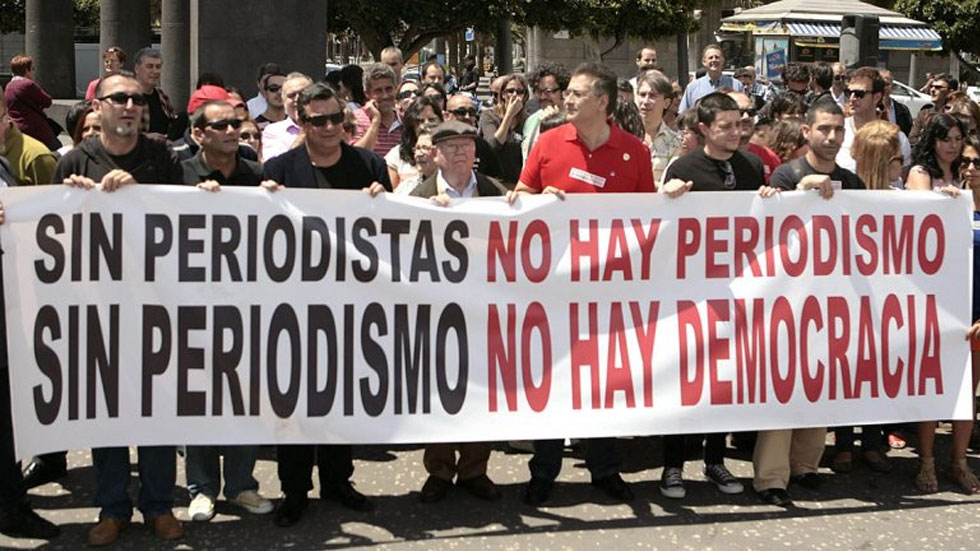 Colombia’s state was the leading threat to journalists between 2012 and this year, according to the country’s press freedom foundation.

The government is responsible for 23% of threats to the press, with 19% coming from politicians or officials and 4% attributed to the security forces, putting them well ahead of criminal, paramilitary, and guerrilla forces.

These figures were submitted by the Colombian Freedom of Press Foundation (FLIP) to the United Nations’ Human Rights Committee that is investigating Colombia’s human rights situation.

Colombia is globally ranked the 11th most dangerous country for journalists by the Committee to Protect Journalists.

Last year represented “a clear setback for press freedom” in Colombia, with two assassinations in addition to an overall rise in incidents of aggression towards journalists.

The group found that 209 journalists received death threats during that period.

In addition to threats and intimidation, numerous acts of aggression by the state against journalists have been recorded by FLIP. These acts can vary as much in their gravity as in their tactics, but numerous examples exist.

These incidents include the destruction of equipment, physical assault, and simple obstruction by authorities of reporters’ work.

Perpetrators of aggression against journalists

While the majority of aggression and threats target journalist working for local news outlets, journalists working for national media are far but exempt from attempts to hinder their work.

Journalists Vicky Davila (former RCN) and Claudia Morales (El Espectador) received chilling warnings that they were being monitored by the police while they investigated a prostitution scandal within its ranks.

These warnings became all too real when they were anonymously sent their own private conversations, schedules, emails, and even the movements of their relatives.

Another incident occurred during the mayoral race in Yopal, Casanare in 2015. John Jairo Torres, currently in jail awaiting trail for money laundering, spent much of the campaign attacking the press for reporting on his alleged corruption.

While one journalist was attempting to cover a traffic accident in which Torres was involved, supporters of the politician attacked him.

In a final incident almost too strange to be believed, the Secretary of Health of Cordoba slapped a female journalist Shelly Camacho Arcia attempting to cover commotion at a concert as a performer was escorted offstage.

A convenient culture of impunity

Regardless of the affiliations of the perpetrators, threats against journalists in Colombia largely go unpunished.

In nearly 90% of the cases of the assassinations of journalists, there are no convictions at all. However, the “masterminds” of these attacks enjoy an impunity rate of 98%.

Local journalists Luis Antonio Peralta from Caqueta and Flor Alba Nuñez from Huila were both assassinated in 2015, and both were known for shedding light on stories of local political corruption.

Although the masterminds of their murders have not been apprehended, one of the alleged assassins of Nuñez is in custody. And yet, it is possible that even this alleged assassin will be released.

Nuñez’ case has already been delayed three times and it has been over a year since the murders. The authorities may only hold suspects for a limited time before the terms of their arrest expire and they can no longer be held in preventative custody.

Colombia’s culture of impunity emboldens all those who want to keep their crimes in the shadows and has a chilling effect on journalists.

“Since they killed Flor, the fear is widespread,” Nuñez’s cameraman told local television network Channel Six. “in several years, journalism in Pitalito could disappear,” he added.

Several Pitalito journalism students changed their focus from journalism to PR and marketing after Nunez’ assassination, the cameraman claimed.