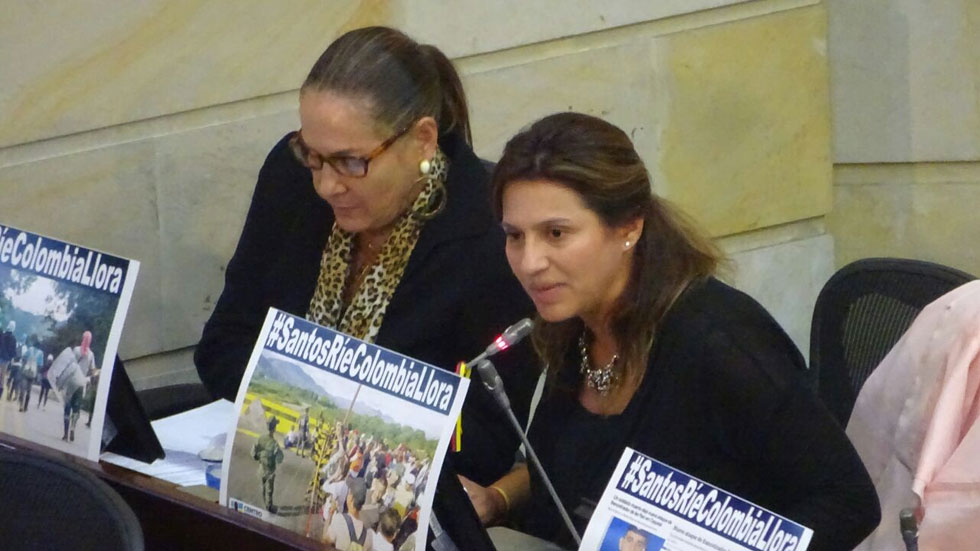 Colombia’s conservative opposition has written a letter in which it asks US Congress to freeze aid to the South American country in what appears to be its latest attempt to undermine an ongoing peace process.

Santos is spearheading a peace process with the Marxist FARC guerrilla group that was fighting the state between 1964 and 2016. The process could have major consequences particularly for Uribe, who is implicated in multiple war crime investigations.

The Democratic Center initially denied the existence of the letter, but later turned around and released the letter, allegedly written by two of the party’s hard-liners, Representative Maria Fernanda Cabal and Senator Paloma Valencia.

Cabal is the wife of the president of the ranchers’ federation accused of financing the now-defunct AUC paramilitary group, while Valencia’s grandfather, former President Guillermo Leon Valencia, effectively started the war by ordering a military attack on a farmers’ commune whose members in response formed the FARC.

CD Senator Paola Holguin, who admitted the existence of the letter, is the daughter of a convicted Medellin Cartel associate.

The letter accuses the FARC of maintaining ties with international terrorist groups, and in addition is aiming to impose its Marxist ideologies in Colombia. Moreover, according to the letter, the peace process would endanger the United States’ national security.

“The letter states, for example, that the Colombian economic system is being seriously compromised by a Leninist-Marxist agenda, following the model of neighboring Venezuela. It says that the impact of the peace agreement goes beyond the borders of Colombia and that the FARC’s proven relationships with international organized crime and terrorist organizations like Hezbollah and Al Qaeda remain intact,” Santos revealed.

The full text of the letter was later published by Colombian media, confirming the president’s claims.

“That is the letter that they are sending to the United States congressmen to suspend our aid, this is the type of opposition we are facing,” the president said at the inauguration of his new chief of staff.

The letter comes at an extremely delicate moment in US-Colombian relations.

US congress is currently considering whether it will uphold former President Barack Obama’s promise to support the peace process with $450 million or not.

US confirms possible reduction in aid for Colombia peace process

Additionally, while US President Donald Trump has indicated he wants to be “ruthless” in continuing the decades-old “War on Drugs,” Santos has increasingly opposed this, even claiming “the war on drugs is perhaps more harmful than all the wars in the world … combined” when accepting his Nobel Peace Prize in December.

Meanwhile, Uribe and many of his political allies are expected to respond to war crime allegations before a transitional justice court that is part of the peace process.