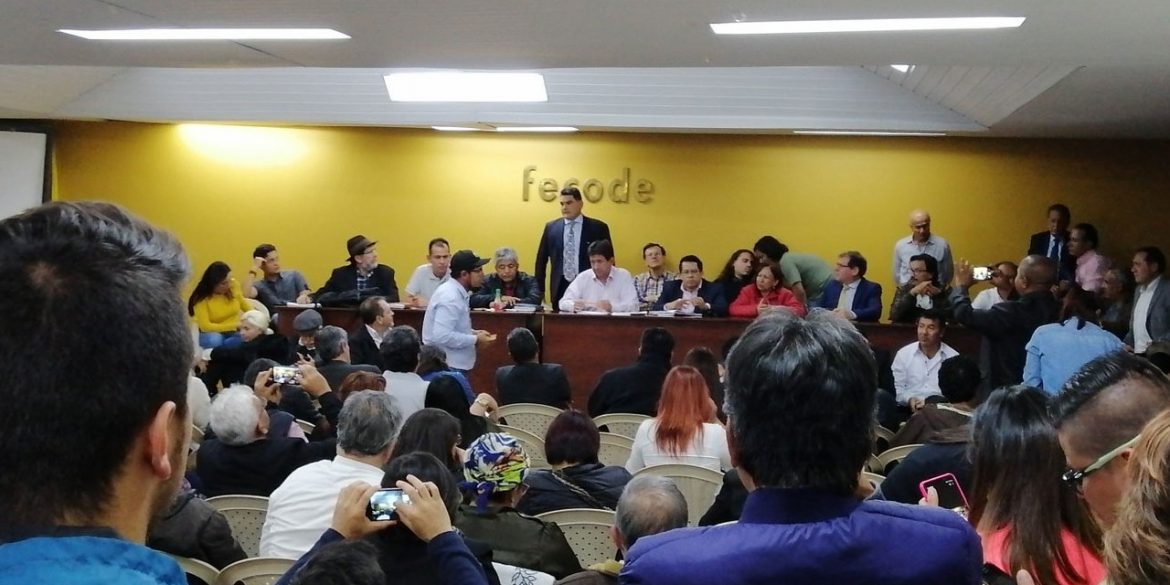 Duque, who appears to believe he is still in control of the country, apparently insisted that the strike leaders take part in a “National Conversation” he proposed last week.

Duque doesn’t plan any dialogue, according to the strike leaders, but a four-month series of monologues explaining his broadly rejected policies.

The strike leaders left the president with their own agenda that consists of 13 points, which they demand the government fulfill in order for them to lift the strike and the swelling protests that come with it.

These demands are from the original strike leaders, and do not cover demands by, for example, indigenous organizations who joined the protests later.

The strike leaders want Finance Minister Alberto Carrasquilla to withdraw the tax reform he illegally pushed through Congress last year. The “budget finance plan,” as it was called, was deemed unconstitutional by the court last month.

The court said that the bill would remain valid until December 31st. Carrasquilla presented the proposal again in the hope Congress might approve it legally before its December 16 recess. Whether this will happen is uncertain.

To the outrage of the strike leaders, Carrasquilla decreed the creation of a financial holding called the “Bicentennial Group” on Monday, while the strikes were in full force. The decree would allow private investors to buy stakes in state-run financial institutions.

Colombia’s Labor Minister issued a decree in August last year that would make it easier for employers to fire people if they become ill, get pregnant or become handicapped.

According to labor union CUT, this decree triggered a “labor massacre of sick people.”

Colombia’s student organizations have been demanding the dissolution of controversial riot police unit, ESMAD, for more than a month. It was this unit, which is not allowed to use lethal force, that killed Dilan Cruz and escalated the protests.

The strike organizers additionally want those officers responsible for the killing of the high-school student to be removed from the National Police.

While none of these proposals have been made formally, the strike leaders want guarantees that the Duque administration and ruling party will abstain from proposing or decreeing any pension and labor reforms.

The strike leaders want the government to remove controversial articles from the administration’s National Development Plan.

The labor unions want the removal of article 193, which allows companies to pay workers less than the minimum wage, depending on the region; article 198, which allows the government to keep pension savings in the event of death instead of giving this to the surviving spouse; article 240, which puts a cap on health intermediaries’ spending on healthcare; and article 242, which increases health payments for the middle class.

7) The government abstains from privatizing any state asset

Carrasquilla, who is notoriously irresponsible, has been considering closing budget deficits by selling state assets. However, the concern is that the finance minister will do this whenever he is short of money and will do it at below market price, disregarding the long-term financial consequences of off-loading companies that generate revenue for the government.

The strike leaders want the government to immediately implement agreements made by this and previous administrations with students, indigenous organizations, state employees, teachers and peasant organizations.

The strike leaders want the government to talk to the country’s main farmers’ rights organization to negotiate changes to free trade agreements made with, for example, the United States, that have resulted in poverty, or mitigate the negative effects of these agreements.

The strike leaders want the government to immediately begin implementation of a 2016 peace deal with the FARC, in coordination with Defendamos La Paz, the country’s largest peace movement that is led by political leaders, some of whom were involved in the negotiation of the peace deal.

Duque had promised he would do this, but failed.

12) No bail out for private energy company

The strike leaders want the government to retract a tax reform that provides the funds to bail out energy company Electricaribe, which is on the brink of bankruptcy due to systemic corruption.

The strike leaders want the government to coordinate all its environmental policies, particularly those related to areas providing the country with drinking water, with environmental organizations.