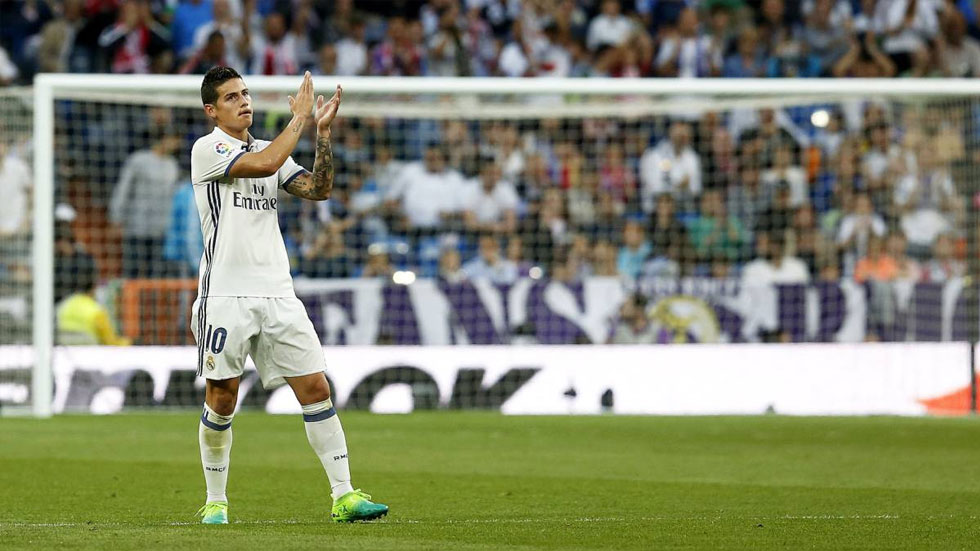 Colombia captain James Rodriguez appeared to wave goodbye to the Real Madrid faithful as he was substituted in Sunday’s win over Sevilla amid claims that he is set to leave the Bernabeu.

The Cucuta-born attacker applauded all four sides of the stadium as he left the pitch in what would be his final home game should he transfer after three seasons in the Spanish capital.

Real Madrid coach Zinedine Zidane moved to quench the speculation in the aftermath of the Colombians’ gesture to the crowd.

“No, James is at Madrid and we have a lot left to do,” said the Frenchman adding that “we’re only thinking about the final stretch,” as his side close in on the league title and prepare for a Champions League Final showdown with Italian giants Juventus at the end of the month.

Despite a revival of fortunes recently, which has seen him score seven goals in his last 10 games, James has been subject to months of speculation linking him with a move abroad, with Manchester United reportedly the most likely suitors.

One Colombian media outlet recently claimed that the 25-year old has even signed a pre-contract agreement with the record Premier League winners.

Sunday’s 4-1 win over Sevilla put “Los Merengues” level with Barcelona in the Spanish league on 87 points having two games to play, crucially one more than their Catalan rivals.