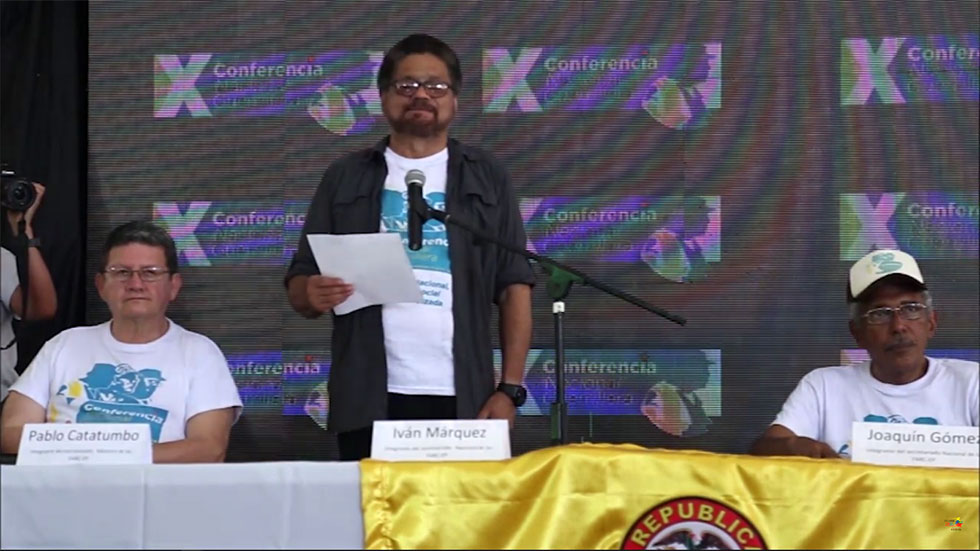 Representatives of the Marxist FARC’s approximately 6,600 fighters have unanimously ratified their leadership’s peace deal with the Colombian state, one of the guerrilla commanders announced Friday.

“The war is over,” “Ivan Marquez,” the rebel commander who led peace negotiations said after reading the 10-point statement made during the guerrillas’ 10th and final National Guerrilla Conference in which the group was expected to dissolve as an armed group.

Marquez announced the guerrilla representatives’ unanimous vote to demobilize and disarm and transform to a non-violent political organization as negotiated with the government of President Juan Manuel Santos.

The FARC’s leadership and at least 200 guerrilla representatives have been meeting near the village of Yari, Caqueta over the week to formally dissolve as an armed group in order to reemerge in 2018 as a political party.

The unanimous support within the Marxist group “reaffirms the internal cohesion that has characterized the FARC in its rebel trajectory,” Marquez claimed.

While the vast majority of FARC fronts has now explicitly committed to demobilization, the group’s dissident 1st Front has not. The unit infamous for its hostage-keeping has refused to take part in a peace process.

One of FARC’s main fronts refuses to demobilize

Marquez called on the dissident unit to return to the FARC and join in the group’s planned demobilization and disarmament.

“To our comrades that were part of the 1st Front, the guerrilla conference tells you that the FARC in its transition to a legal political movement has the doors open to welcome you as members of the same family again,” Marquez said.

With the reading of the final statement, the guerrilla representatives’ will stay in Yari to witness the peace ceremony held in Cartagena together, after which they will celebrate the end of the war with musical performances.

The guerrilla representatives will return to their individual fronts, of which the FARC has approximately 50.

The FARC’s guerrillas and approximately 10,000 militia members are supposed to begin the logistical preparations of concentrating demobilization camps across the country on Tuesday.

The rebels’ actual move from their jungle camps and homes to these camps could be postponed a week to wait for the outcome of the congressional approval of an amnesty law that won’t happen before a referendum on the peace deal.

Colombia FARC rebels hint at postponing demobilization until after referendum

In this referendum, the Colombian people will also be asked to either ratify or reject the deal. Pollster estimate the peace deal will receive broad enough support, in spite of discontent over made concessions.