Falcao joins on loan for an initial £6m fee with an option to buy next summer for a further £46m (Photo: Man Utd)
Sports

Speculation has finally come to an end, and the ending looks happy for Falcao, who will be playing in a Red Devil jersey with number nine on the back for the next year on a loan, according to Manchester United’s official site.

Despite the team’s dreadful last season finishing on a seventh place the Colombian expressed thrill to be playing for one of the biggest soccer franchises in Europe. 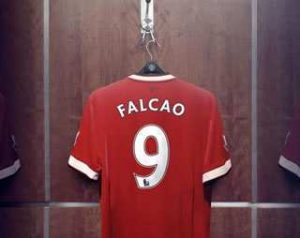 “I am delighted to be joining Manchester United on loan this season. Manchester United is the biggest club in the world and is clearly determined to get back to the top. I am looking forward to working with Louis van Gaal and contributing to the team’s success at this very exciting period in the club’s history,” Falcao stated.

Head coach of the British giants Louis Van Gaal commented on the loan, which he was happy to see come through after interest from both the money machine Manchester City, British club Arsenal and also Real Madrid, who were reported to be the favorite to loan the Colombian striker.

“I am delighted Radamel has joined us on loan this season. He is one of the most prolific goalscorers in the game. His appearance-to-goal ratio speaks for itself and, when a player of this calibre becomes available, it is an opportunity not to be missed,” Louis Van Gaal said.

United’s loan deal with Falcao’s French team AS Monaco is reported to be worth close to $10 million with the possibility of a permanent purchase of the player at the end of the season, UK newspaper The Guardian reported. The striker’s salary is supposedly $313,800 a week, which make the total cost for Manchester $26.41 million.

MORE: Colombia’s Falcao to play for Manchester United on loan

Van Gaal favoring a two-striker-system with British Wayne Rooney and Netherlands Robin van Persie as first picks, Falcao’s role is still uncertain. “El Tigre” could just be a high-profile backup for van Persie, who has struggled with injuries during his career, or United’s head coach could be planning to change to a 4-3-3 formation.