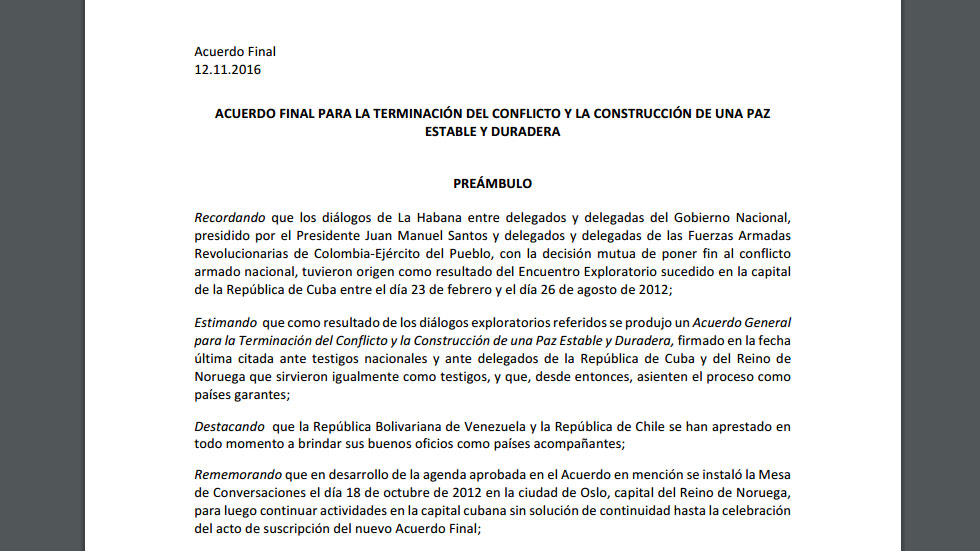 The publication of the 310-page agreement allows the scrutiny of the revised deal, parts of which had already been revealed by President Juan Manuel Santos and the government’s chief negotiator, Humberto de la Calle.

Leaders of the opposition to the initial FARC deal that was signed on September 26 and rejected in a referendum on October 2 have refused to respond to the government’s version of the pact.

Lawmakers of the opposition Democratic Center party of former President Alvaro Uribe responded negatively to the presented changes, but opposition leaders like Uribe, his former Defense Minister Marta Lucia Ramirez and former President Andres Pastrana have refused to comment until having had the chance to study the revisions.

This won’t be an easy task, because rather than publishing the 13 pages of amendments, the government integrated the “adjustments and clarifications” in the full peace deal, meaning that all 310 pages are open for scrutiny.

The deal that was initially signed on September 26 was rejected in a shock October 2 referendum with a margin as sharp as a razor, but enough to remove the president’s faculty to execute the deal as agreed.

Since then, negotiators have frantically debated with political opponents of the agreement, FARC victims, church leaders to reach a broader consensus for a second deal that would allow the resumption of the FARC’s demobilization that had already begun.

Ahead of the annunciation and after his private meeting with Santos, former President Uribe urged the new deal should not be definitive and first be presented to representatives of the those who voted “No.”

Whether the newly reached agreement will be sent for ratification to Congress or again be subject of a referendum is unclear.

The president has said he was considering both options.