Colombia’s prosecutor general will ask Interpol to seek the arrest of the leadership of the ELN, of which at least one member is in Quito for peace talks, newspaper El Tiempo reported.

The decision followed the decision of Prosecutor General Nestor Humberto Martinez to prosecute the leadership over recent bomb attacks.

Arrest warrants for ELN negotiators “Pablo Beltran” and “Antonio Garcia” were suspended a year ago to allow formal peace talks.

The talks were suspended by President Juan Manuel Santos last month after a number of deadly guerrilla attacks.

The ELN’s negotiators in Quito

The prosecution now claims that Beltran and the commanders in the field were involved in the bomb attacks on police stations, road infrastructure and oil pipelines.

In total, 27 ELN guerrillas were charged with involvement in the recent uptick in guerrilla violence in response to the warring parties’ failure to extend a ceasefire. 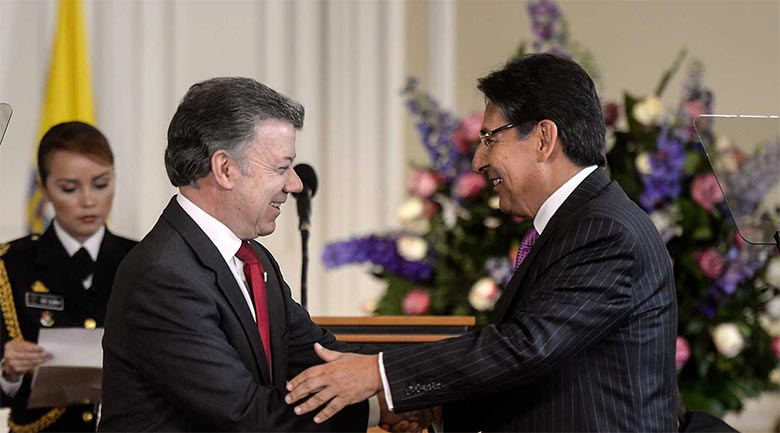 Army commander Alberto Jose Mejia said earlier this week that “if any top level commander sets foot on Colombian soil, rest assured that the security forces will attack them.”

The ELN and the Colombian military have been fighting each other since the group’s formation in 1964.

President Juan Manuel Santos did not immediately respond to the chief prosecutor’s decision to seek the arrest of the guerrilla leaders currently in Quito.

The arrest warrants came almost immediately after some 50 social leaders traveled to Quito to mediate the resumption of talks with the ELN.

The group met with Santos last week and were encouraged to go to Quito. The Catholic Church and two senior politicians have also been mediating a de-escalation of conflict.

The talks that were announced in 2014, but did not start until last year have been plagued by a deep-rooted mutual distrust.

Public approval has sunk to a 15% low after an ELN bomb attack killed five policemen in Barranquilla in January. Paramilitary groups have unleashed a campaign of terror in the countryside where they vie for territory with the ELN.

The escalation of violence is taking place only a month before the first elections of the FARC, the group that demobilized and disarmed 14,000 people last year.

The former guerrilla group suspended its election campaign after multiple violent incidents that in some cases were instigated by hard-right politicians and far right political activists.

The elections have resulted in violent protests against FARC candidates and other leftists. At least 37 former FARC members were assassinated after their demobilization.

Colombia’s armed conflict and the preceding civil war between conservatives and liberals have killed more than 450,000 people over the past 70 years. More than 8 million Colombians were displaced in the past three decades.