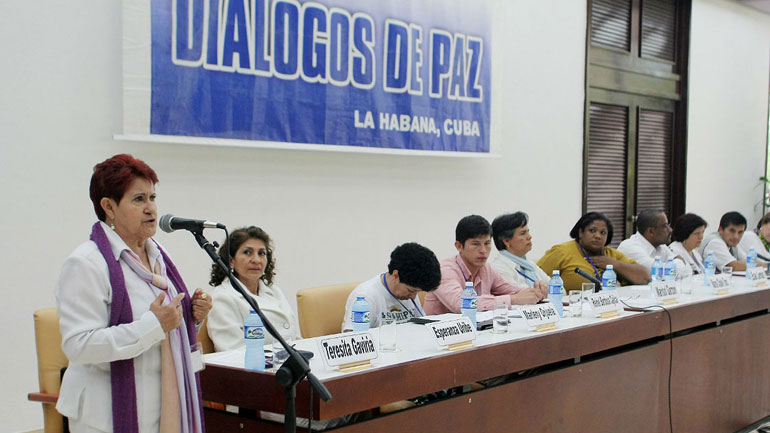 Representatives for the victims of Colombia’s ongoing internal armed conflict on Monday expressed their unanimous support for a transitional justice deal that was signed last week by the government and FARC rebels in a mutual attempt to make peace.

The group of 60 victims who were invited to Havana, Cuba to take part in the peace negotiations released a statement saying that they believe the signing of the justice deal was a “crucial step” towards the final conclusion of the peace talks which, according to president Juan Manuel Santos, will happen within six months.

While expressing their optimism in the joint statement the victims also urged both parties to reach an agreement on the next point on the peace talks agenda, “Victims,” as soon as possible.

The 60 representatives of the 7 million registered victims emphasized the importance of the deal “for the recognition and full respect of human rights and the International Humanitarian Law in Colombia.”

Together the victims lauded the “restorative justice perspective” of the deal which will “allow sanctions to become effective contributions to reparation, no repetition and the building of peace.”

The justice deal includes the creation of a Special Jurisdiction for Peace which will see suspected members of the FARC, State officials, paramilitaries and civilians go before a court to determine their responsibility in the armed conflict.

The most important aspects of the deal for the victims are the truth commissions, the reparations that all those found guilty will have to pay, the guarantee of no impunity and the measures put in place to prevent the repetition of civil conflict.

The statement read by Jineth Bedoya, a journalist who was kidnapped and raped by paramilitaries in 2000 said that this deal represents “an historic opportunity to fully recognize the responsibilities of the State, the FARC and all the groups and people involved in the conflict.”

One of the 60 victims who was invited to the table of negotiations in Havana, Teresita Gaviria, runs a victims organization called the Mothers of the Candelaria and told Colombia Reports on Thursday that they were “very happy” with the deal.

However, Human Rights Watch believes the punishments outlined in the deal are too soft on war crimes and “would deny justice to thousands of victims of grave violations of human rights and humanitarian law.”

Peace talks have been taking place in Havana, Cuba between the government and the FARC since November 2012 in the hope of resolving the 51-year-long armed conflict which left 260,000 Colombians dead and over 6 million displaced.