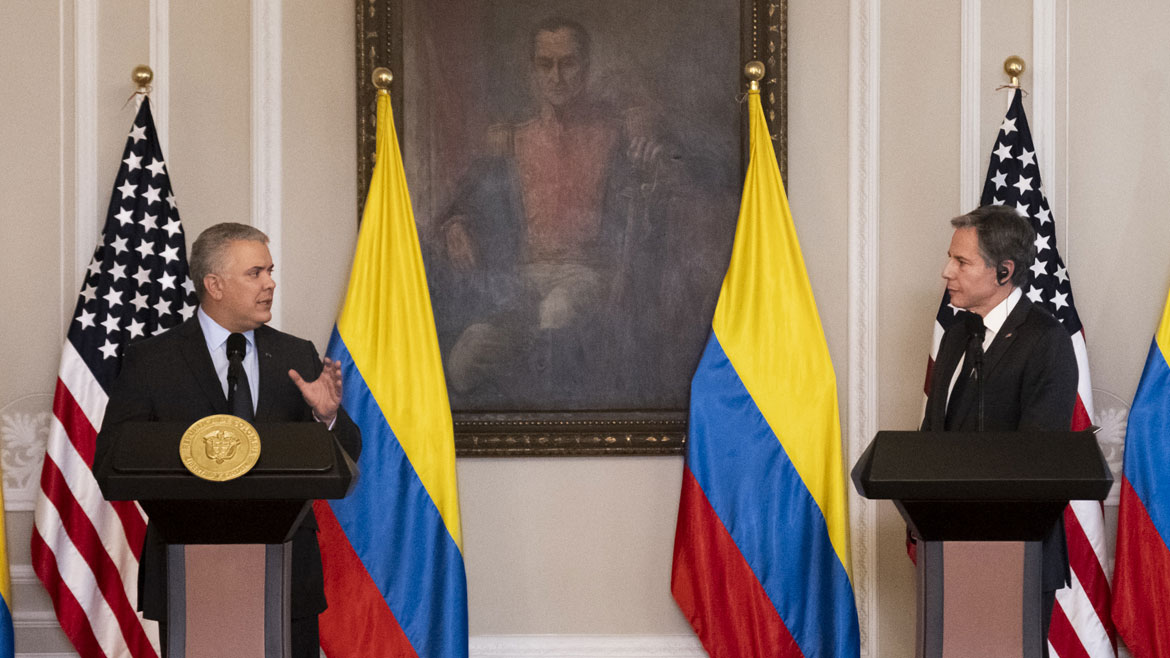 President Ivan Duque rejected a decision by Colombia’s Senate to create a bilateral commission that seeks to reestablish ties with Venezuela.

In a press conference with US Secretary of State Antony Blinken, Duque said that he wouldn’t recognize the “disgraceful dictatorship” of his Venezuelan counterpart Nicolas Maduro.

Venezuela’s president expressed his support for the initiative of the Colombian Senate to “normalize” relations.

One thing we cannot be mistaken about is that Colombia will not recognize a disgraceful, corrupt, drug-trafficking dictatorship.

According to Gomez, reestablishing ties between the two neighboring countries “is an issue that doesn’t have political ideology, it’s a commercial issue.”

Rodriguez said that the National Assembly would be debating the proposal in an extra session on Thursday.

The initiative of the Green Alliance opposition party received unanimous support in Colombia’s Senate on Tuesday.

The Maduro regime ordered to cut all ties with Bogota in early 2019 after Duque and drug trafficking organization “Los Rastrojos” provided logistical support to a US-backed plot to oust Maduro.

The plan sought to forcibly enter Venezuela with “humanitarian” aid from the US, but failed after the convoy led by Venezuelan lawmaker Juan Guaido got stuck on the border.

Duque has since refused to consider any reestablishment of ties with Caracas, implying this would recognize Maduro’s disputed 2016 reelection.

The breaking down of ties sunk the border region, which largely relies on trade, into a major crisis.

The border region effectively full under the control of illegal armed groups that took advantage of the suspended cooperation of security forces.

Duque’s grandstanding doesn’t change the fact that the government must do whatever the legislative says whether the increasingly authoritarian president likes it or not.

The Senate also doesn’t need approval to advance exploratory talks from Duque, who is set to leave office in August next year.

If Venezuelan lawmakers decide to engage in exploratory talks with their counterparts from Bogota, a possible agreement to reestablish ties would likely take a while.

If Duque decides to insist on maintaining broken ties with Caracas, this would only delay the possible normalization of diplomatic ties with a few months.