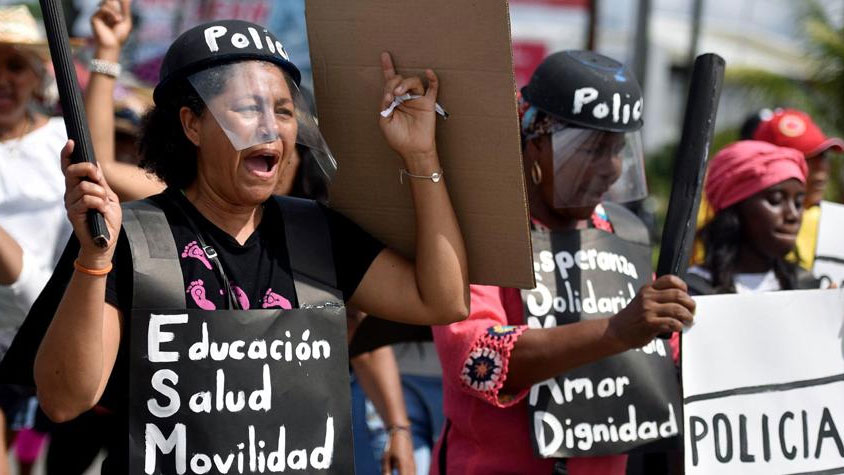 After almost three weeks of social unrest and extreme state violence in Colombia’s largest port city Buenaventura, the defense minister sent another 3,000 soldiers to the city while negotiations with locals continue.

The massive influx of military personnel further increased tensions in the port city where locals already have complained about the extremely violent response to the mass protests demanding an end to state neglect, corruption and violence.

To further agitate the impoverished inhabitants of the port city whose privatized port contributes $55 million a day to the national treasury, but nothing to the city, Interior Minister Guillermo Rivera on Sunday continued to deny evident police brutality.

The minister vowed to stay in the city until the strike was lifted.

I repeat, in the report we were given there exists no confrontation.

I’m in the streets hearing your people, those also under your command saying “You gotta kill those niggers, hit them hard,” that’s what they’re saying. We reject the laziness and the racism the State represents.

Locals have been adamantly turned to social and independent news media to demonstrate the rest of the country and the international community the minister is lying about the evident police brutality.

National media have mainly reported on the cost of the protests and similar police brutality in neighboring country Venezuela.

Reliable estimates about injuries and deaths do not exist. According to the National Police, one policeman has been “assassinated” and another 41 injured. The police reported no civilian deaths or injuries.

Instead of trying to silence the communities of Buenaventura, the Colombian authorities should protect residents and focus on responding to their demands given the critical levels of violence and exclusion suffered by the people who live in Colombia’s Pacific region.

One video sent to Colombia Reports showed two toddlers receiving medical treatment the feared ESMAD anti-riot unit threw teargas into neighborhoods and homes in one of many violent attempts to break up the mass protest.

According to the source, one of the babies had died. This website has not been able to verify that claim.

In response to their city’s militarization, the city’s artists on Sunday took to the streets, stressing “we do exist” and want a good relationship with the National government and live in peace”

The Interior Minister ceded to locals’ demands to create a national fund to provide the city with potable water, which in many parts of the city is unavailable, but said there is no money to provide school children with food.

The national fund is the first government concession after weeks of fruitless negotiations, persistent protests and extreme police violence.

We agree with the creation of a patrimonial fund for Buenaventura, but we still haven’t defined neither its financial sources nor its central elements.

According to the national government, negotiations would continue Monday. Meanwhile, the locals maintain their civic strike and their blockade of the port.

However, locals’ fears of increased state repression of the protests to demand basic public services like drinking water and a hospital continue, especially after the arrival of 3,000 soldiers in the city of 400,000.