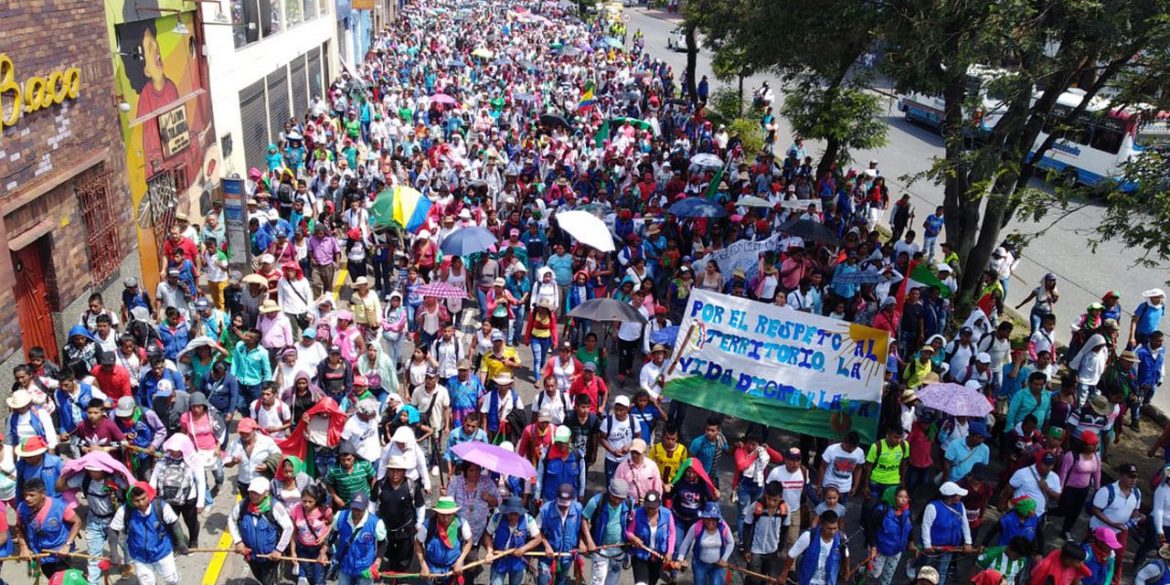 Colombian citizens taking part in one of the many marches for peace that have been held over the past years.
From the editor

Colombia made a leap towards justice, but expect the war criminals to fight back

The decision of Colombia’s war crimes tribunal not to extradite FARC leader “Jesus Santrich” is a major leap towards justice, but we can expect a response from those who are trying to perpetuate impunity.

The fact that Santrich doesn’t have to stand trial for apparently bogus drug trafficking charges is not a victory in itself. He may not be a narco, but I wouldn’t be surprised if he is something much worse; a rapist or a murderer.

His extradition would have ended investigations into crimes committed in Colombia that, in my opinion, are much more serious than trafficking some cocaine. Justice for his alleged crimes must still be served.

Seeing him being shoved onto a plane would’ve provided a moment of instant gratification for Colombia’s television viewers, but it wouldn’t be justice.

Blaming the FARC for everything is not justice, it’s politics

Among the FARC’s leaders and former guerrillas are people who have committed heinous crimes against Colombians, but they are not alone. All guerrilla groups combined are responsible for 17% of the innocent civilians who were murdered in the armed conflict, according to the National Center for Historical Memory.

After two and a half years of a peace process, the majority of Colombians do still not know that the remaining 83% of the murder victims were not victimized by guerrillas, but by paramilitary groups or state officials, many of whom still occupy positions of power in politics, the security forces, the private sector and the media.

Where I live in Antioquia alone, the owners of both newspapers, the Hernandez family of El Colombiano and the Gaviria family of El Mundo, have both been convicted for land dispossession.

These families have been ordered to return this land, but not one member of these dynasties have spent one day in court to respond for their criminal activity. In fact, former Senator Sofia Gaviria created an association of FARC victims that she has used to oppose the war crimes tribunal.

Their newspapers and many others will likely continue to misinform the public about the armed conflict and the peace process, despite their journalists’ attempts to tell the truth.

The commander of the National Army, General Nicacio Martinez, is implicated in, among other crimes, the murder of a 13-year-old girl who was dressed up as a guerrilla and presented to the public as a guerrilla killed in combat.

Cement giant Argos, whose directors met with US Energy Secretary Rick Perry only a few days ago, has 12 convictions for dispossessing land from displaced farmers. None of their decision makers have seen a day in court.

There is compelling evidence indicating that the political patron of President Ivan Duque, former President Alvaro Uribe, was involved in two massacres and allegedly helped form the “Bloque Metro” death squad that left thousands of victims, also in Antioquia. How this guy has still not been taken to court is a mystery to me.

These people in power are not going to submit to justice without a fight. They never have and they never will.

Those of us who want to live in peace and want to see justice must be prepared for ongoing aggression that serves only one purpose: the perpetuation of impunity for crimes committed during the armed conflict.

Thousands of witnesses to war crimes and advocates for justice have already been assassinated. The longer justice is delayed, the more will follow, only to allow those who have so far gotten away with their crimes to evade justice.

Colombia’s war crimes tribunal yesterday flexed its muscles and encured that Santrich, a certified asshole, will have to face his victims, confess his crimes and repair his victims. It also dealt a blow to those who challenged the force of transitional justice.

Colombia’s congress largely has supported the peace process, so have the courts. The international community, with the disgraceful exception of the United States government, has been persistent in supporting our quest for peace and justice.

But we must be prepared to take more punches, to see more aggression against those seeking peace, justice and reconciliation.

Colombia’s peace process, and our quest for peace and justice, is going to take decades and is not going to be easy. We will not persevere just because we believe we have justice on our side. Obtaining peace, truth and justice will require a constant effort against powerful forces who will not go down without a fight.