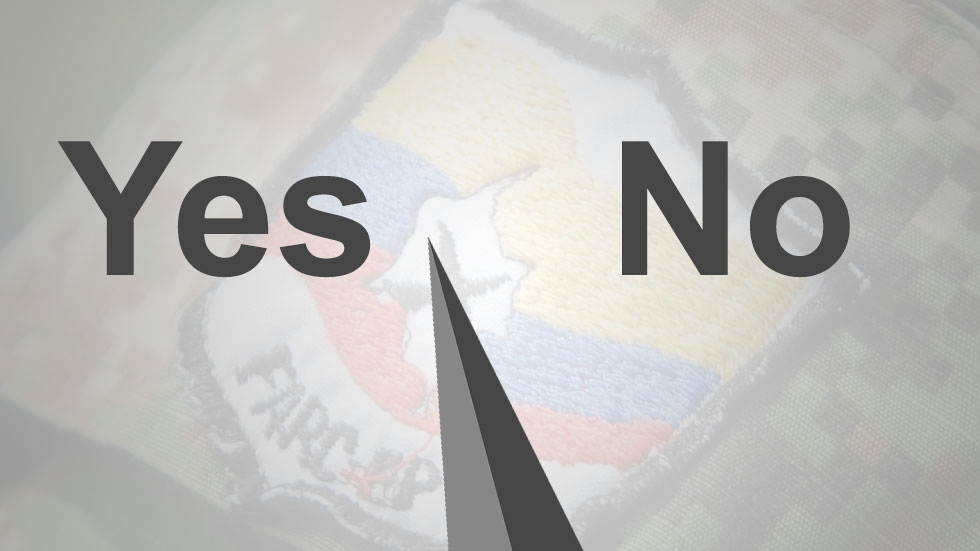 Two polls released on Wednesday indicated that the recently signed peace deal with the FARC is likely to be ratified by Colombia’s electorate on Sunday.

President Juan Manuel Santos and FARC leader “Timochenko” signed peace on Monday, but before this agreement can be fully ratified, Colombians will vote on the deal in a referendum first.

According to two pollsters, Datexco and Ipsos Napoleon-Franco, a comfortable majority of Colombians said they will ratify the peace deal.

Both pollsters also indicated that the turnout is likely to high enough for the vote to be valid. For the referendum to be valid, at least 13% of the electorate will have to cast their vote on the winning ballot.

According to Datexco, 67% of the 2,000 voters who were polled by phone said they will take part in the referendum against 25% who said they wouldn’t. Eight percent has yet to decide.

How Colombians say they will vote in the referendum

Ipsos measured considerable higher support for a “Yes” vote, 66%, against 34% who would vote “No,” but also registered a major drop in support. In the first week of September, 72% of those polled by Ipsos said to support the peace deal against 28% who said to vote against.

Datexco registered a slight drop in support for both the “Yes” and the “No” vote.

Both polls were held in the days before the formal peace ceremony that took place in Cartagena on Monday.

Datexco registered a major disparity in voter intention per region. While in the capital Bogota 62.4% said they would vote yes, in the area around Medellin, the stomping ground of former President Alvaro Uribe, a majority of voters said to be against. Also in the northeast, where the smaller guerrilla group ELN has been highly active, a major rejection of the deal was measured.

The southwestern region, where the FARC long for decades was most active, wasn’t measured by Datexco at all.

While the peace deal has already taken effect and the procedures to demobilize and disarm the FARC began the day after the signing of the peace deal, a “No” vote could still stop this process in its tracks.

But while many reject elements of the deal, particularly in regards to the FARC’s political participation and the transitional justice system, the opposition promoting the “No” vote has been politically marginalized.

The only prominent opponent of the deal is former President Alvaro Uribe, whose opposition has been questioned because of his personal interest in the deal.

Uribe’s brother is currently in jail awaiting trial on multiple homicide charges that could be transferred to the Transitional Justice Tribunal. The former president himself is expected to be investigated over the executing of thousands of innocent civilians by the military under his watch.