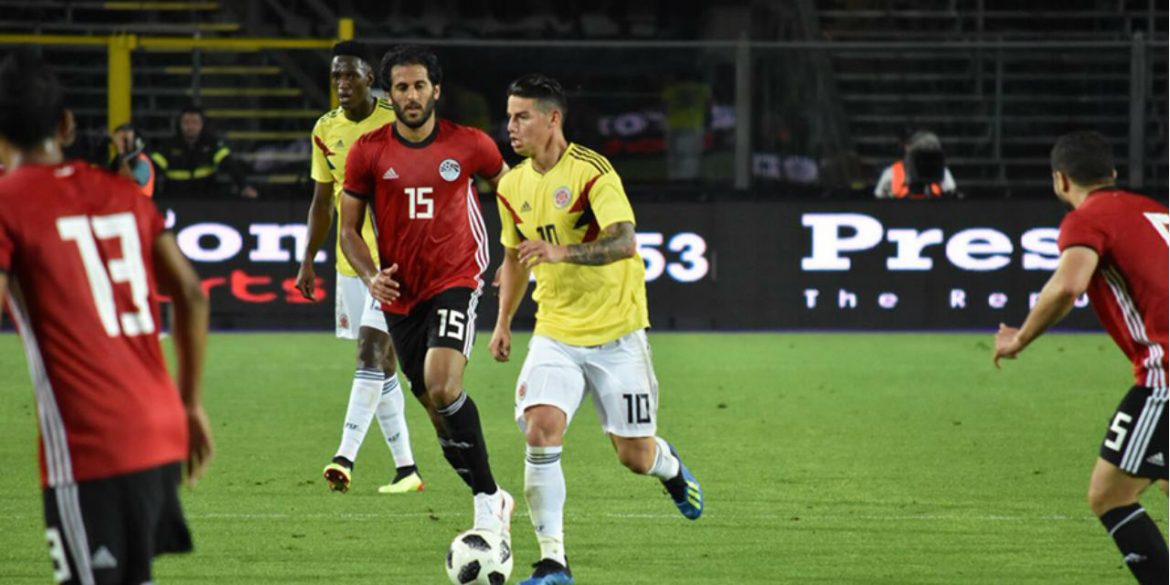 Colombia’s national soccer team played out a scoreless draw against Egypt in Italy on Friday as preparations for the World Cup in Russia continued.

In a game that Colombia dominated in terms of possession, “El Tricolor” failed to make a decisive breakthrough against a resolute Egypian side at the Atleti Azzurri d’Italia Stadium in Bergamo.

Barcelona’s Yerry Mina was paired with fellow youngster Davinson Sanchez at the heart of the defense while the Argentine coach gave a chance to Levante’s Jefferson Lerma and Mexican-based Mateus Uribe to impress in the midfield.

Colombia dominated the opening exchanges with Falcao having two chances in the opening 12 minutes to give his side the lead but the Monaco striker headed wide on both occasions.

Egypt threatened for the first time in the 33rd minute when Abdallah El-Said flashed a corner into the Colombian box. The ball only needed the slightest touch but somehow managed to evade everyone in a crowded six-yard area.

James came closest to opening the scoring in the 35th minute when he saw his thunderous drive from a free-kick saved by El-Shennawi.

James put Cuadrado through two minutes later but the Juventus man lofted the ball over the crossbar as he attempted to beat the out-rusing El-Shennawi in the Egyptian goal.

Egypt almost took advantage of disarray in the Colombian defense in the 42nd minute but Ospina somehow saved from a close-range Ramadan Sobhi header as the first half came to a scoreless end.

Pekerman shuffled the deck for the second half, introducing Johan Mojica, Jose Izquierdo and Oscar Murillo straight after the break.

Colombia continued to dominate proceedings but struggled to breakdown an organized, aggressive Egyptian outfit in what was a disjointed second half with both side making several more substitutions.

“Los Cafeteros” finished with a flurryand the introduction of River Plate’s Juan Fernadno Quintero gave them some additional creativity.

Substitute Carlos Bacca tested the Egyptian ‘keeper with a 72nd minute header after good work from Quintero and Santiago Arias down the right flank and James had further efforts in the 83rd and 88th minute but to no avail.

In a frantic conclusion to the match, Egypt denied Izquierdo a winner with some last-ditch defending and Colombia were forced to settle for a scoreless draw.

The result means a second consecutive scoreless draw for the Colombians and while Pekerman will have been happy to give a run-out to several players ahead of the World Cup, the team has looked anything but balanced in recent games.

With two weeks to go before the tournament, the Argentine maestro will have to find a tactical solution that yields goals from a team blessed with a variety of attacking options.

Colombia will kick off the World Cup campaign against Japan on June 19 before facing Poland on June 24 with the final group game against Senegal scheduled four days later.