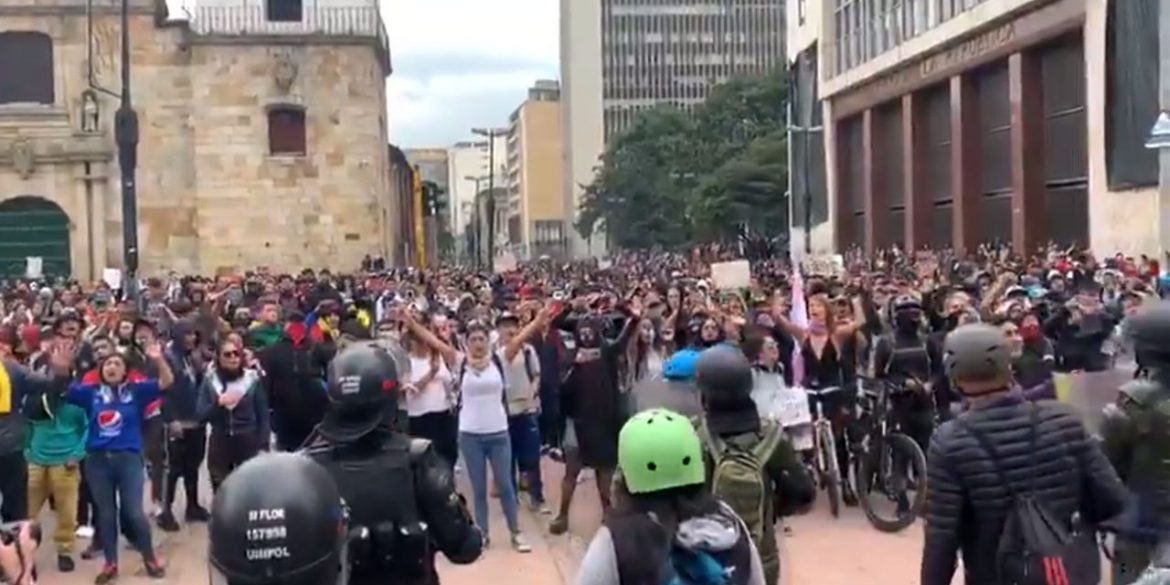 Colombia steps up violent repression of peaceful protest in Bogota

Riot police in Colombia’s capital Bogota have become increasingly violent in attempts to repress peaceful protests. At least one person was critically injured.

After evidence emerged indicating that police were involved in a terror plot to instill fear in Bogota’s residents, people massively took to the streets for another cacerolazo, a noise protest in which people bang on pots and pans.

Riot police have reportedly been attacking people with tear gas indiscriminately to prevent them from reaching the city center.

In one video, police attacked protesters while they were singing the national anthem.

Strike organizers have called for the cacerolazo at 5PM and called to organize block parties to show “no fear” after a night of terror in which unidentified men and police were breaking people’s windows throughout the city.

The first incident of violent repression of peaceful protest during the anti-government protests that began Thursday was reported on Friday when people tried to reach the central Bolivar square near the presidential palace for a cacerolazo.

On Saturday, the repression appears to have become the norm’; there have been multiple reports of ESMAD officers using tear gas and stun grenades to avoid any type of assembly in or near the capital’s city center.

Duque’s apparent counterinsurgency response to the anti-government protests appears to have had an adverse effect since before the beginning of the national strike.

What began as a national strike supported mainly by labor unions and students has since grown to become a broadly supported and diffuse protest movement of people who are essentially fed up with the unpopular president.

Strike organizers have called for a second day of national strikes for Monday while the cacerolazos have become a daily routine in cities and towns throughout Colombia.