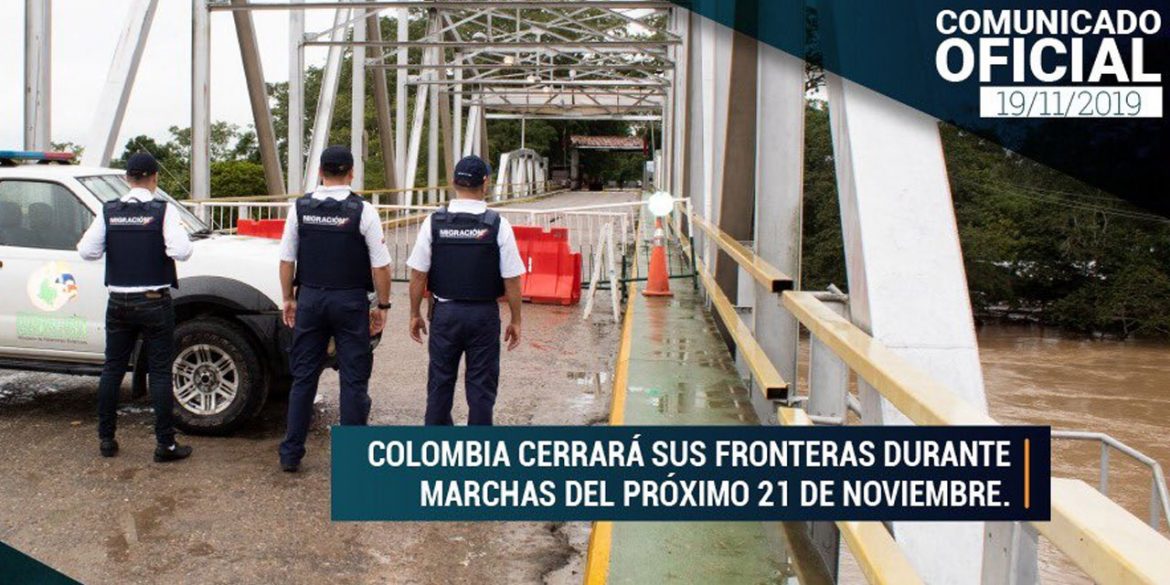 Colombia’s migration authority said Tuesday that it will close all border crossings as the government has begun imposing all kinds of measures ahead of anti-government protests planned for Thursday.

In a press statement, Migration Colombia director Christian Kruger said that the border crossings will close on midnight and won’t open until Friday morning.

The military has been on red alert since Monday and began patrolling in the capital Bogota on Tuesday to “accompany the police” until Wednesday, according to Defense Minister Carlos Holmes Trujillo.

On social media, the extraordinary measures appear to only be fueling support for the national strike and rejection of President Ivan Duque, who was already suffering an abysmal approval rating.

Adding fuel to the fire, police raided the homes of social activists in Bogota and arbitrarily detained promoters of the protests in a town outside Medellin.

Far-right activists from Medellin said they would be mobilizing after Duque’s political patron, Alvaro Uribe, sent out a video of a hooded man threatening to attack the city’s metro system.

Adding to the instability is the fact that the Supreme Court is expected to decide on whether or not to file fraud and bribery charges against Uribe and possibly send him to jail within days or weeks.

What began as a protest against the government’s economic policy in October has escalated to protests in defense of Colombia’s very democracy.

In Congress, Duque can only count on the support of a minority coalition and his far-right Democratic Center party suffered a devastating defeat in local elections last month.

The government’s baseless conspiracy theories about foreign infiltrators and planned violence are completely out of touch with the very real and broad disapproval of the government and its increasingly militaristic use of power.

Inspector General Fernando Carrillo called on the government to engage in dialogue, which Duque has consistently refused with indigenous groups and students.