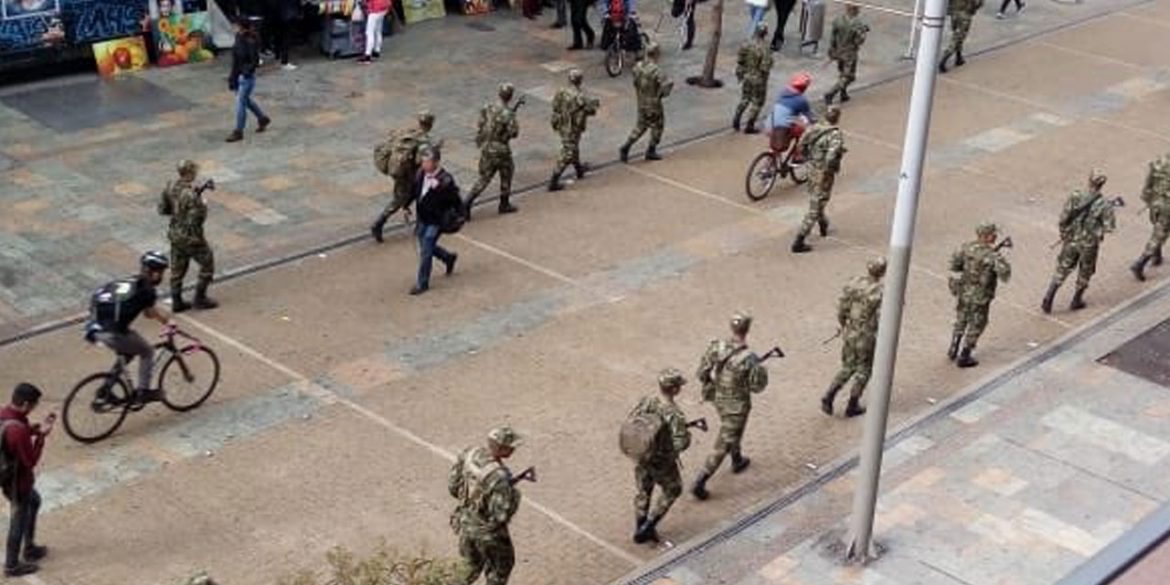 While soldiers began patrolling the streets of Colombia’s capital Bogota, the defense minister on Monday denied the country’s cities were being militarized ahead of anti-government protests.

Defense Minister Carlos Holmes Trujillo said that the military commander’s order to enter the highest state of alert was no “extraordinary procedure.”

General Luis Fernando Navarro over the weekend ordered a red alert that took force on Monday and would last until Friday as the country is preparing for mass anti-government protests on Thursday.

Public and private universities are being militarized in Colombia, 3 days before the people's national strike called for November 21st. Media is full of fake news, trying to criminalize the protests. The world must pay close attention to ??.

According to Trujillo, the soldiers in Bogota were there at the request of Mayor Enrique Peñalosa and would only “accompany” police until Wednesday.

Citizens reported that tanks were stationed in cities in Boyaca where farmers are expected to be protesting.

Trujillo and Interior Minister Nancy Patricia Gutierrez said that President Ivan Duque would issue a decree to “regulate” the protests “within hours,” but no decree had been announced by Tuesday morning.

In an interview with pro-government television network RCN, Duque said he was still “contemplating” measures, including closing the border.

According to the president, these measures would seek “the protection of strategic structures,” prevent “infiltration from other places” in the protests “and to guarantee the right of citizens who want to exercise peaceful protest.”

At least 11 foreigners have been arrested on claims they sought to “affect public security and social order,” according to the country’s migration authority.

While the government has almost constantly expressed concerns over violence, labor unions, students and indigenous organizations leading the protests have insisted they seek nothing but peaceful protest.

Liberal Party congressman Carlos Ardila, who announced he would take part in the protests, expressed his concern over the appearance of soldiers in Bogota, stressing that “the army’s constitutional role is not to control social protest.”

“To take out rifles in the streets in the framework of demonstrations generates a greater danger,” the house representative said.

The government’s attitude appears to have an adverse effect as support for the protests on social media seems overwhelming as well as disapproval of the government.

“Resistance to change with manipulation, fear and stigmatization no longer works and will no longer hold back legitimate and peaceful demands,” said Bogota’s Mayor-elect Claudia Lopez.

While the national strike was initially called by labor unions, they have since been joined by student organizations, indigenous groups and even football fan clubs.