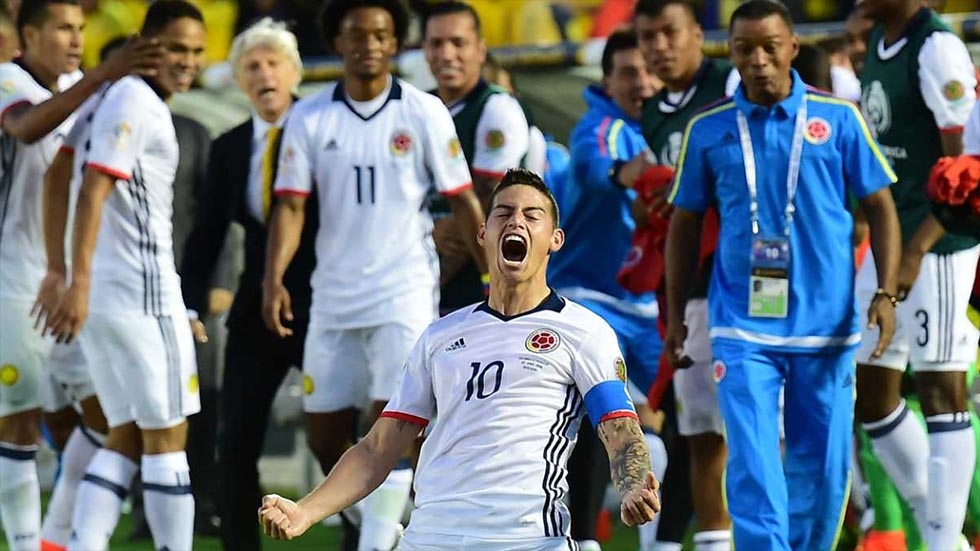 Colombia secured qualification for the knockout stages of the centenary Copa America following  a 2-1 win over Paraguay on Tuesday in California.

Colombia’s win at the Rose Bowl Stadium in Pasadena means that they are guaranteed a quarter-final place ahead of their final group game against Costa Rica on Saturday.

Colombia coach Jose Pekerman opted to start captain James Rodriguez after the attacker underwent a late fitness test on a shoulder injury and it was the Real Madrid man’s goal which ultimately proved decisive.

A first half display of incisive attacking football was enough to see “Los Cafeteros” through to the knock-out stages of the world’s oldest football competition.

AC Milan striker Carlos Bacca gave the Colombians the lead in the 11th minute with a powerful header from a James Rodriguez corner.

This set Pekerman’s side on their way to victory with talisman James adding a second following good work by Carlos Bacca and Edwin Cardona to mark his 16th international goal.

Colombia were dominant for large parts of the first half but Paraguay fought back late on with Paulo da Silva having a goal ruled out for offside in the 33rd minute and Dario Lezcano smashing a free kick off the crossbar just before the break.

Paraguay were in desperate need to get something out of the game following a 0-0 draw in their opener with Costa Rica and Ramon Diaz’ side battled back in the second half with real intent.

Substitute Victor Ayala gave them a life-line with 20 minutes remaining after he unleashed a powerful shot past David Ospina in the Colombia goal to reduce the deficit to the minimum.

However, the task at hand became even more difficult for the Paraguayans when Oscar Romero was dismissed having received two yellow cards in as many minutes.

As the Paraguayans pushed forward for an equalizer, they left themselves susceptible to the counter attacking pace of Colombia and Edwin Cardona looked to have put the result beyond doubt but his 82nd minute effort rebounded off the post.

A goal and an assist from James aswell as a solid all-round display will please coach Jose Pekerman as Colombia set their sights on the quarter finals, the stage at which they fell in last years competition.

Colombia will play their final group game against Costa Rica on Saturday, June 11 at 8 pm a the NRG Stadium, Houston, Texas while the clash between Paraguay and the USA on Sunday will likely determine who joins them in the last eight from Group A.

Colombia, now ranked 3rd in the FIFA World Rankings have won the Copa America just once,  in 2001.