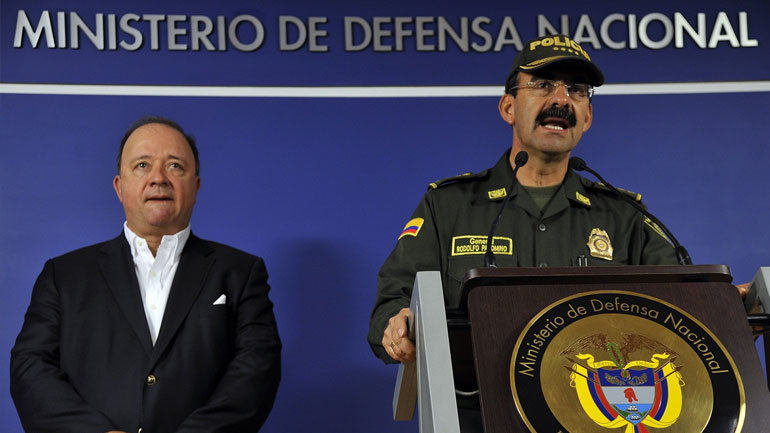 Colombia’s National Police chief met with the defense minister Sunday after media revealed that hundreds of cadets allegedly worked in a gay prostitution ring within the institution.

According to the weekly, the government is considering the early retirement of General Rodolfo Palomino after an accumulation of scandals made his position virtually untenable.

The general was already in trouble after audio was leaked in which three officials stated that Palomino in 1998 had sexually harassed a subordinate during an official ceremony.

Last week, Prosecutor General Eduardo Montealegre opened an investigation into the alleged shadowing, wiretapping and intimidating of prominent journalists who had covered the story.

But on Sunday a whole new batch of scandals unfolded.

Radio station La FM, whose editor-in-chief is of the alleged victims of the police intimidation tactics, revealed evidence that Palomino’s alleged sexual misconduct was not an isolated incident.

The radio station revealed that hundreds of cadets made part of an illegal gay prostitution ring within the country’s largest police school, the General Santander school in the capital Bogota.

A total of 300 cadets would have taken part in the prostitution ring allegedly led by Colonel Jerson Jair Castellanos, the former head of security of Colombia’s Congress.

The alleged suicide of a female cadet who allegedly was about to blow the whistle on the ring in 2006 is still investigated as a possible murder, said La FM.

To make the Palomino’s position even more untenable, Semana columnist Coronell claimed that the police spying and the intimidating of journalists as investigated by the Prosecutor General was because the involved journalists’ imminent publication on the scandal.

Coronell had already published allegations over the alleged prostitution ring in 2014.

As if that was not enough, the renowned journalist asserted on Sunday that the general had been ripping off subordinates through the flipping of property, one of the victims allegedly being one of the officials who were caught on tape revealing Palomino’s alleged sexual harassment.

Palomino responded, denying he ripped off colleagues and asking the Prosecutor General’s Office to proceed with investigations to clarify whether the accusations on the gay prostitution ring are true.

Meanwhile, the government is deliberating how to respond to the accumulation of scandals overshadowing the police and its commander.