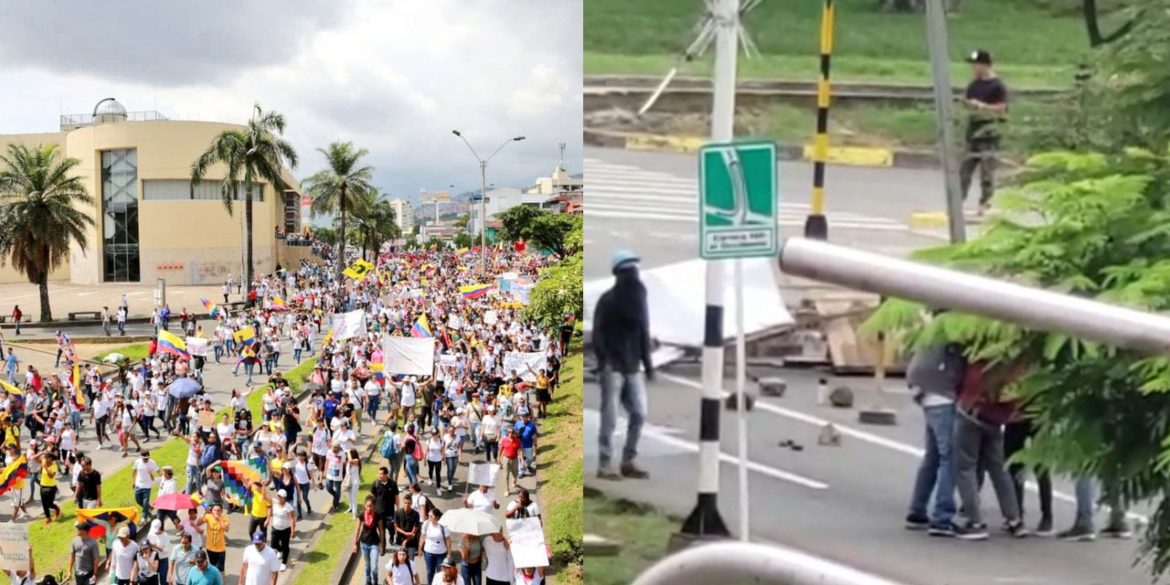 Cali’s city hall issued a 7PM curfew after violence erupted on the fringe of anti-government protests that were peaceful in the rest of the city and Colombia.

The clashes between rioters and anti-riot police unit ESMAD took place near the local university, away from the more than 20,000 people who were marching, singing and dancing through Colombia’s 3rd largest city peacefully.

Cali Security Secretary Andres Villamizar called the incident a “sad paradox,” claiming that the clashes prevented others from joining the anti-government protests.

“The violent minority that has affected the proper functioning of the MIO Mass Transit System has prevented those who wanted to march peacefully from reaching the meeting points,” according to Villamizar.

Clashes were also reported in the capital Bogota where the riot police unit used teargas to stop a group of people from marching towards the airport in the west of the city.

This incident happened miles away from the protest that, despite rain, filled the central Bolivar square with tens of thousands of protesters.

Earlier in the day, protesters had expelled undercover cops trying to infiltrate one of the marches heading to the city center.

In Medellin, the country’s second largest city, protesters apprehended infiltrators who were trying to vandalize a shopping mall.

The incidents were unable to mar the massive protests that were held in more than 100 cities and towns and seemed more like an anti-government carnival than a protest.

What Colombia’s massive anti-government carnival looks and sounds like

Organized by labor unions and largely led by students and indigenous organizations, Colombians massively took to the streets to protest against President Ivan Duque.

The peaceful marches and street parties were the latest embarrassment for Duque who had ordered the highest military alert and closed the borders, reportedly because he was made to believe the protests were an attempt to overthrow his government.

Ahead of the protests, the president’s political patron, Alvaro Uribe, and his far-right Democratic Center party had been spinning all kinds of conspiracy theories, some involving satanists and “international anarchists.”

Twitter blocked the former president temporarily on Thursday after publishing the names of protest organizers.

Contrary to paranoiac fears of the president and his party, and the government’s fear-mongering and intimidation attempts, Colombians massively took to the streets to tell Duque they want better government and peace.