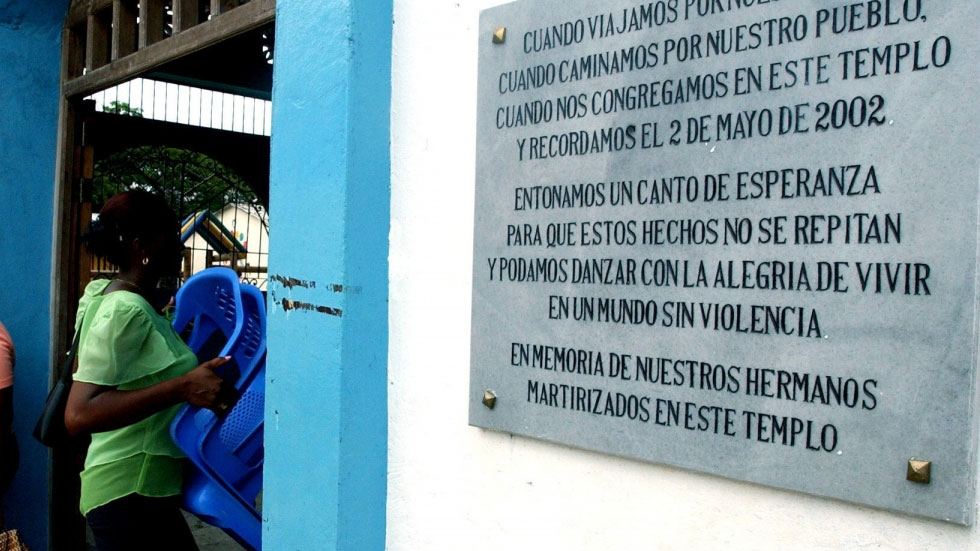 Survivors of the Bojaya massacre on Monday and Tuesday commemorated the 15th anniversary of the single most deadly guerrilla attack on civilians in Colombia’s 53-year armed conflict.

The mass killing took place on May 2, 2002 in the township in the jungles of the Pacific Choco province, after a guerrilla projectile accidentally fell on a church, killing at least 79 of approximately 300 civilians inside.

At the moment of the massacre, the church was packed as locals were taking shelter from a firefight between the FARC and rival paramilitary group AUC and were hoping their house of prayer would keep them safe. It did not.

A candle-lit procession took place on Monday night, led by the families and loved ones of the victims, who walked through the quiet streets of Bojaya in a silent vigil to those who needlessly died 15 years ago. 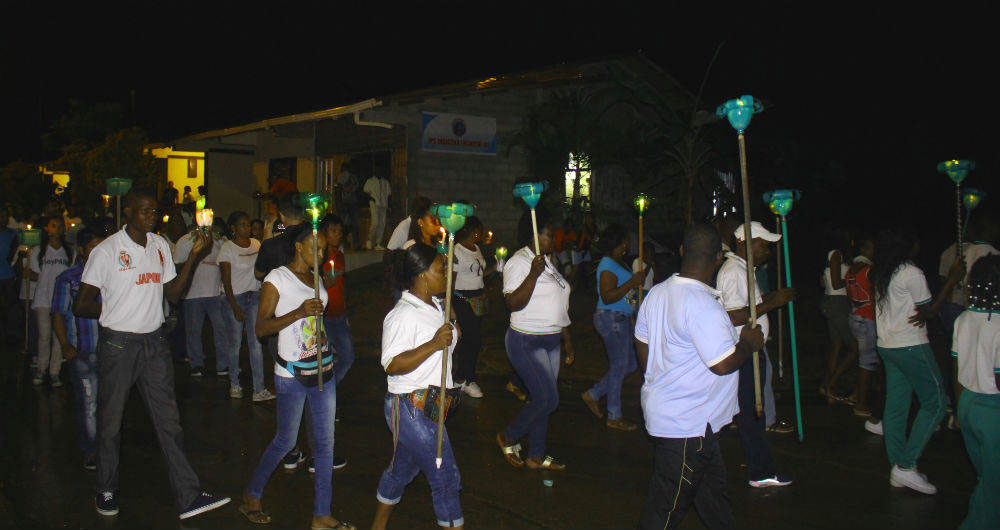 Bojaya residents pay respect to the loved ones they lost in the massacre during a nightly vigil (Image credit: Semana)

The procession followed the same route that the victims did until arriving at the village of Bellavista, where a Eucharist was held in homage to the dead.

As part of the Colombia’s attempts to help the locals overcome their traumas, the government has agreed to exhume the mass graves in which the victims were initially dumped and grant them an individual Christian burial.

The exhumation of the victims will begin on Wednesday and is expected to be finished by the end of May, the spokesman for the Bojaya Victim’s Rights Committee, Adgero Atin, told press on Monday.

The process of identification and delivery of the bodies will take place in the city of Medellin and could take up to seven months. After this the bodies will be returned to their loved ones, who will be able to do perform proper burial ceremonies.

Only in December 2014 — when the guerrilla group was negotiating peace with the government — did the FARC formally accept responsibility for the attack. Former FARC commander “Pablo Catatumbo” expressed his group’s regret over one of the most traumatizing events of the conflict.

Barely containing his tears and with trembling hands, FARC commander “Pastor Alape,” personally asked the community for forgiveness at a formal ceremony in December 2015.

A second FARC commander, “Ivan Marquez,” later visited the town to deliver a “Black Christ” statue similar to the one destroyed in the bombing, as part of the group’s obligation to repair its victims.

Apart from the FARC, the Colombian government was condemned for the massacre in 2008 for failing to protect the predominantly black community in spite of several warnings combat between the guerrillas and the paramilitaries was likely to affect the civilian population of Bojaya.

In the years ahead of the massacre, the 17th Brigade of the National Army actively worked together with the paramilitaries to rid Choco of communists, who in some towns had been elected into office.

While the FARC has begun complying with its promised contributions to peace building, the government has so far failed to carry out its obligation to ask for forgiveness in a similar fashion it failed to initially protect the community.

After 15 years it has been demonstrated that in the face of this massacre there was negligence on the part of the state and institutions, and today the state has not yet to ask for forgiveness from the victims of this massacre,” said

The victims are not just ignored by the state, but have also denounced a lack of solidarity from the Colombian public after it rejected a peace deal that would remove Bojaya from war.

Instead, the “No” vote to peace gave paramilitary group AGC a four-month head start in consolidating control over the area considered a major drug trafficking corridor.

This rejection of the peace deal was endorsed by former Presidents Alvaro Uribe and Andres Pastrana. The latter was the commander in chief at the time of the massacre and the president who simply ignored official alerts of an impending bloodbath.

In 2015, the State Council ordered a criminal investigation of the former president and the military leadership at the time of the massacre, in spite of efforts by the administration of President Juan Manuel Santos to prevent this.

Of all Colombia’s provinces, Choco is the one where the war hit hardest and, in spite of the peace deal, continues to wreak havoc because of an ongoing turf war by the AGC, an AUC dissident group, and ELN guerrillas.

Approximately 2/3rd of the province’s population is already a formally registered victim of the conflict, meaning that two out of three Chocoanos have either been the victim of forced displacement, kidnapping or rape, or have a direct relative who was either killed or forcibly disappeared.

The Pacific province, among Colombia’s richest in natural resources, is paradoxically also the country’s poorest province with 65% of the population living below the poverty line.