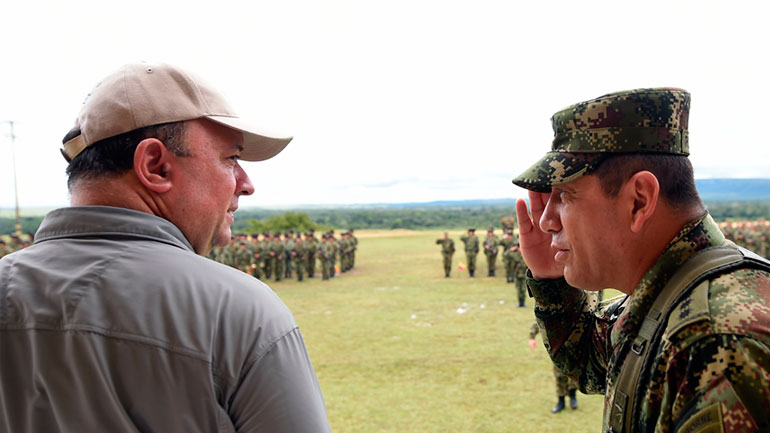 A bilateral ceasefire between Colombia’s government and FARC rebels is “very far away,” said the country’s Defense Minister on Monday.

President Juan Manuel Santos on Saturday ordered the suspension of air strike in response to a unilateral FARC ceasefire that came into force almost a week earlier.

The initiative is just one of several that seek to deescalate the armed conflict while negotiators in Havana, Cuba, negotiate the end of 51 years of fighting between the state and the rebels that according to official statistics has left more than 260,000 dead and 6.3 million displaced.

Eventually, the FARC and the military seek to agree on a bilateral and definite ceasefire which in effect will mean the end of warfare, possibly ahead of a final peace deal.

However, according to Defense Minister Luis Carlos Villegas, “we are very far from this truce.”

“For a deal like that a lot of details are required on operations, commissions and proceedings,” Villegas said at a public event in the central Meta province.

“This takes a long time because we have only just begun with this in the subcommission” on the end of conflict that consists of top members of the military and the FARC and was created last year to pave the way towards the end of the armed conflict.

However, an April FARC attack set a series of violent events in motion that caused public opinion to turn against the peace talks and almost led to a rupture of the talks that began in November 2012.

The crisis spurred international sponsor countries to call for “urgent” steps towards a bilateral ceasefire.

After both countries again agreed to reduce violence under the accompaniment of the United Nations and UNASUR, the FARC resumed its unilateral ceasefire and Santos quickly reciprocated by announcing the end of bombings.

While the military subcommission is negotiating the possibilities for a bilateral ceasefire, the main negotiation commission is talking about how to grant justice to the more than 7 million victims left by the conflict.

These negotiations are progressing slowly as neither party wants to take full responsibility for the victimization and making concessions prove difficult as both parties face thousands of accusations of war crimes that according to international law may not remain in impunity.