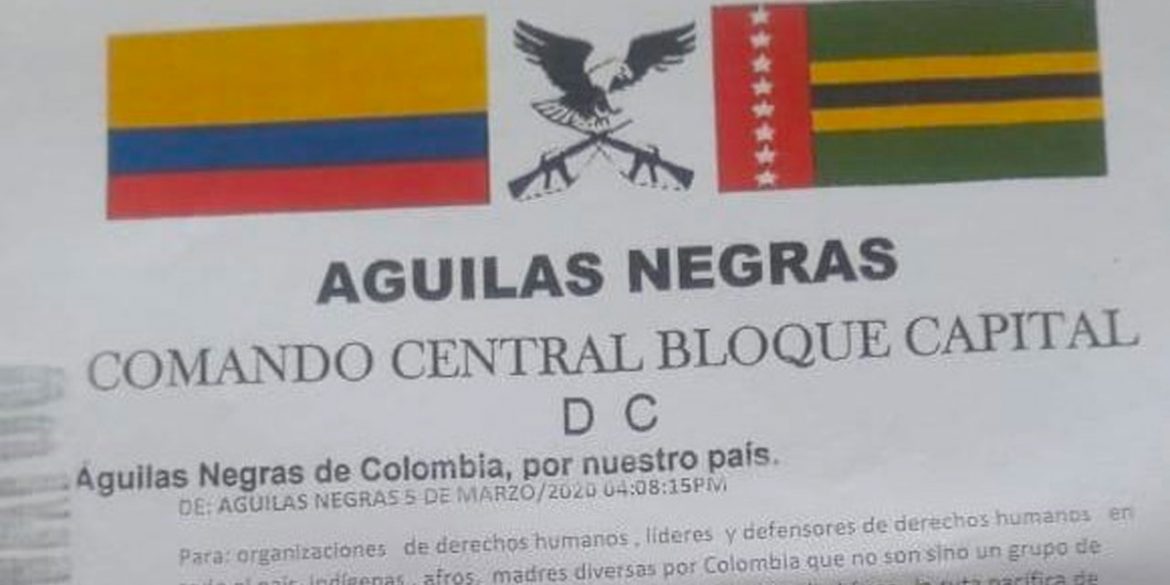 ‘Aguilas Negras’ put half of Colombia on their latest death threat

The “Aguilas Negras,” which appears to be tied to Colombia’s security forces, sent out a death threat to so many people it barely fits on one paper.

The death threat again included Bogota Mayor Claudia Lopez, victims organization and countless social leaders, and this time added the country’s ombudsman, all of whom allegedly are “camouflaged guerrillas and militia members doing counterintelligence” that  seek to “destabilize and gain power.”

Human rights organizations, leaders and defenders of human rights throughout the country, indigenous people, Afro-Colombian people, Diverse Mothers for Colombia who are nothing more than a group of fucking guerrillas camouflaged by the lesbian Claudia Lopez, the Ruta Pacifica de Mujeres, La Mesa de Mujeres Victimas, Viva la Ciudadania, Yira Castro, National Victims Table, the district table, the departmental table, local tables, rural tables, Sisma Mujer, organizations that are on the lists of the central command of the Aguilas Negras as military objectives because they are spaces for guerrillas and militias doing counter-intelligence in the cities and towns, seeking with this to destabilize and gain power. These organizations or spaces disappear along with the following people. Your time is up and as you can see we have you located. Many have already fallen and you don’t believe us and we won’t stop, so be prepared to see how we recruit your sons and daughters, and the others leave or die.

Human rights attorney Alirio Uribe, who defends a woman who was murdered by the military, asked President Ivan Duque to “stop the persecution” not even doubting the military was behind the death threat.

“How curious, the army’s ‘opposition’ list looks like the military objectives of the ‘Aguilas Negras’,” Political scientist Sebastian Quiroga noted in reference to a National Army social media watch list accidentally made public earlier this week.

“The government has the State’s intelligence systems at the service of the Democratic Center [party of President Ivan Duque] and the mafia,” said opposition Senator Wilson Arias.

Others on Twitter took  to ridiculing the presumed Military Intelligence threat a bit further.

I just received a letter from some Aguilas Negras telling me to get out of here. Does anyone know who they are?

Much of the scorn was due to Military Intelligence’s apparent lack of intelligence and its writing skills of a 15-year-old.

Nevertheless, social organizations from rural parts of the country who have suffered the assassinations of countless of their members reiterated the terror imposed on them.