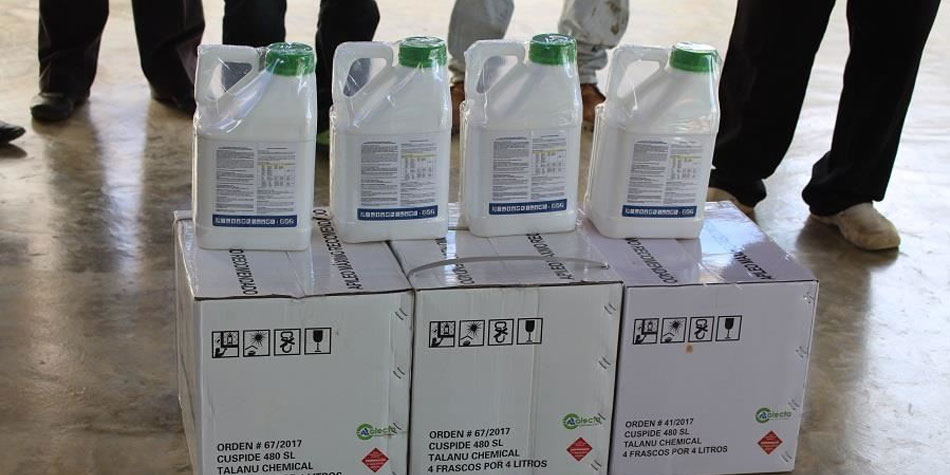 For the second time, Colombia’s National Police has bought a Chinese glyphosate banned by the United States for being too toxic and inflammable, local media reported Sunday.

The $1 million blunder to buy 700 gallons of the herbicide Cuspide with which it hopes to fumigate coca is not the first; the police made the same error in 2012, according to newspaper El Espectador.

According to evidence published by weekly Semana and newspaper El Tiempo, Colombia’s counternarcotics chief, Major General Jorge Luis Ramirez, bought the chemical from Talanu Chemical, the same company that sold the government $4 million of the useless chemical in 2012.

Contrary to seven years ago, the gallons bought this time are meant for manual rather than aerial fumigation, which was banned in 2015 and may not be resumed unless approved by the Constitutional Court. 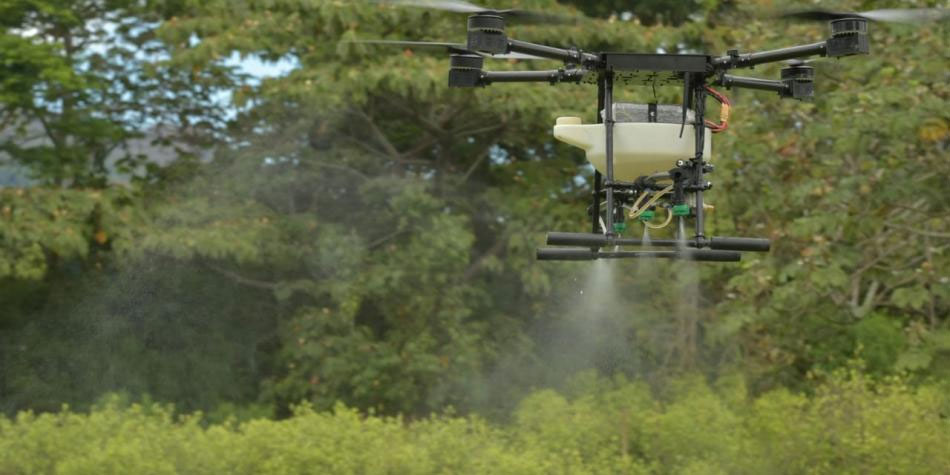 Experiments to fumigate coca with drones have failed to produce the promised results. (Image: Defense Ministry)

US authorities said seven years ago that the Talanu herbicide is too toxic, flammable, inconsistent and fraudulently certified, and may not be used in US-sponsored counternarcotics programs.

Unless Washington changed the regulation on the use of allegedly dangerous Chinese chemicals, Ramirez will be stuck with 700 gallons of herbicide he also can’t use for manual spraying and a million dollar loss.

The United Nations Office on Drugs and Crime (UNODC), national experts and many in Congress oppose the use of glyphosate because of growing scientific evidence that indicated the chemical is a hazard to public health and the environment.

Instead, they want the government to implement the counternarcotics strategy promoted by the UNODC that allows coca farmers to voluntarily remove their crops in return for substitute crops and improved infrastructure allowing farmer access to the legal economy. This program, whoever, is virtually paralyzed because it has been underfunded.

The police potentially wasting a million dollars on herbicides that are not even allowed by Washington DC only adds fuel to the fire to an already fierce debate, especially because it’s the second time.

Duque lucky Congress is on vacation

Fortunately for Duque and Ramirez, Congress is on recess until July 20 and may be preoccupied with scandals that are yet to come.

But what is certain is that when Congress returns, the president is going to await some serious opposition to his hard-line drug policy to eradicate the many tens of thousands of hectares of coca.

These figures are exactly the same, President Pastrana, Uribe, Santos and now Duque has them. These figures show that we have lost the war on drugs and Colombia continues to be the main product and the main exporter [of cocaine].

Martinez’ blunder is unlikely to help convince either the court or Congress to resume aerial spraying, or appease Trump whose tax payers cough up most for the budget to forcibly eradicate and fumigate coca.