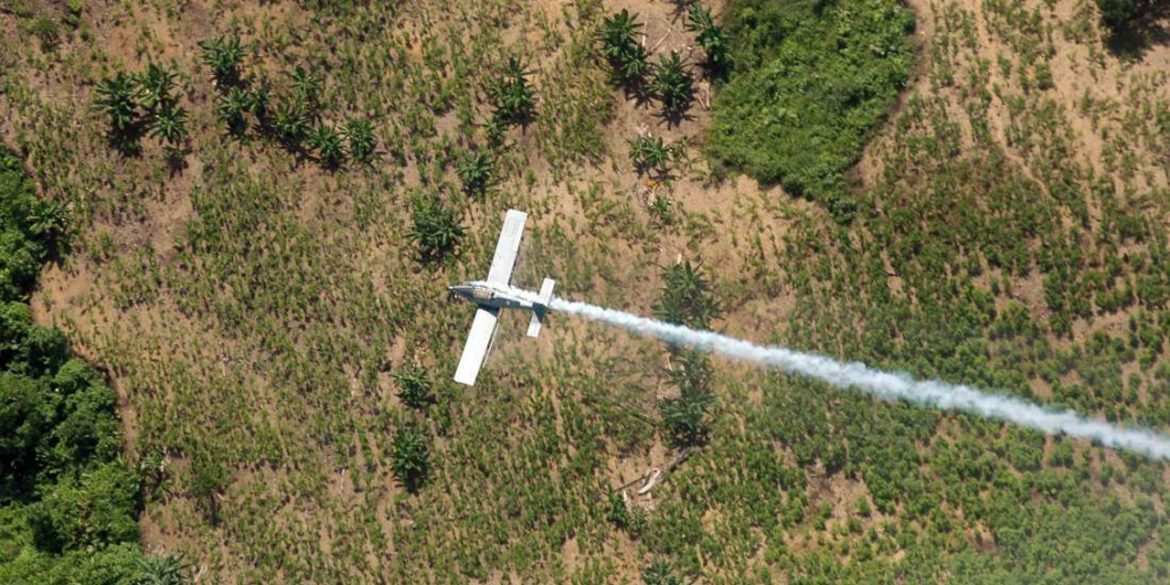 The intention of Colombia’s government to resume the aerial fumigation of coca with glyphosate is facing opposition from the United Nations’ drug agency and bishops from areas where the base ingredient of coca is grown.

The representative of the United Nations Office on Drugs and Crime in Colombia reiterated his office’s position that the only way to reduce coca cultivation is through rural development.

In addition to this, seven church leaders from coca-growing regions in the south and west of the country released a joint statement opposing the use of the chemical.

This push-back followed the release of a presentation by Sergio Arboleda University, President Ivan Duque’s alma mater, that contradicted foreign scientists who have warned about the public health risk of glyphosate.

Duque’s former university presented 29 slides to Colombia’s Constitutional Court, which banned the resumption of aerial fumigation with glyphosate in 2017 unless the government was able to comply with multiple conditions.

One of these conditions was an academically-backed guarantee that the use of the chemical would not pose a threat to farmers and the environment  in areas where spraying would occur.

Based on information provided by the producer of Glyphosate, multinational Bayer, Sergio Arboleda University claimed that “exposure to pesticides in one’s diet represents a risk equivalent to drinking one glass of wine every three years.”

According to the university, no chemical could ever be guaranteed to be harmless to public health.

Lapaque stressed that the only long-term solution are “sustainability projects” that would allow coca farmers access to Colombia’s legal economy.

Obviously glyphosate works, but the problem is sustainability, meaning that if you have to take off with an airplane to fumigate every three or four months because of the reseeding, it doesn’t make sense because the practice would never stop. It costs a fortune and the bottom line is that we have to move from a culture of illegality to one of legality and this is done through sustainability projects.

Bishops weigh in too

Seven bishops and archbishops from the coca-rich, but dirt-poor south and west of the country released a joint statement in which they blasted the government for its failure to implement a peace deal made with FARC guerrillas in 2016 that included counternarcotics policies as recommended by the UNODC.

We reject outright the decision already announced by the government of the Republic of Colombia to resume the fumigation of illicit crops with glyphosate, given the negative consequences for human life and the environment.

According to the clergy, “the government should bear in mind that the presence of these crops in, in many cases, are a consequence of the neglect suffered by the people in these regions.”

We reiterate our call to the government to prioritize human life, the environment and the voluntary substitution of crops.

Since coming to power in August 2018, the Duque administration has been caught between the UN and local experts who have urged to implement the counternarcotics strategies laid out in the peace deal and the US government that has urged to increase repressive measures like forced eradication and aerial fumigation.

Duque has favored the policy aggressively promoted by US President Donald Trump who in 2017 threatened to decertify Colombia as a cooperative country in his government’s “war on drugs”, also taking verbal swings at Duque on multiple occasions.

In April, Trump even claimed that Colombia’s “drug business has gone up 50% since he’s been there,” which was contradicted by the White House on Tuesday.

Colombia’s coca cultivation boom may be over, US says, as 2018 holds steady

Looking to the wider scientific community, there is still significant dispute over the health effects of glyphosate.

However, even if glyphosate is relatively harmless to the human body, opponents have stressed that the indiscriminate spraying would instantly wipe out the livelihoods of farmers who do not grow illicit crops like coca or poppy.

Furthermore, the impact on wildlife indisputably has the potential to be devastating due to habitat alteration and food chain depletion.

The UN has maintained for years that the strategy pushed by the US and the Duque administration is ineffective, and that crop substitution is the most effective and socially beneficial solution.

The United States’ Government Accountability Office has also criticized the counternarcotics strategy in Colombia, claiming no administration has measured whether it in any way has been effective.