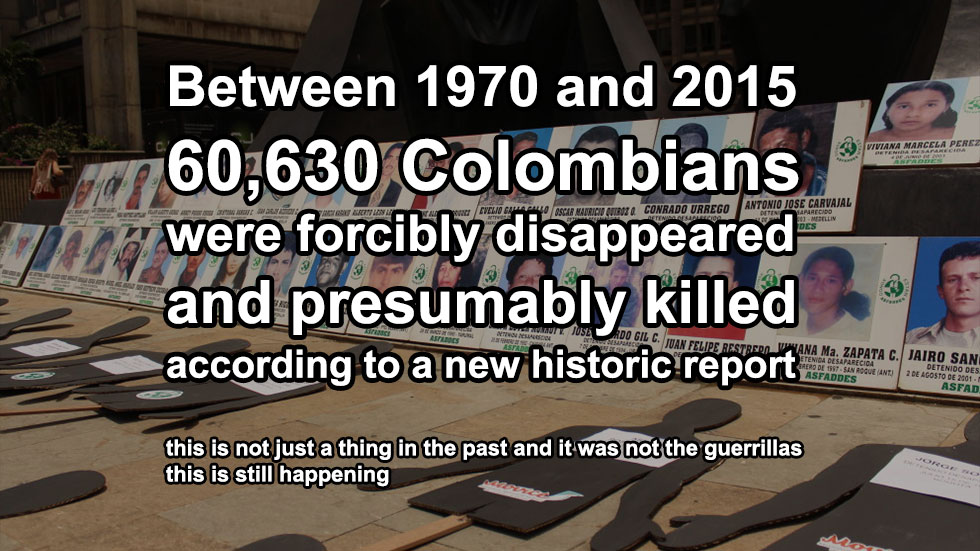 Almost 61,000 Colombians have been forcibly disappeared between 1970 and 2015, primarily by state-loyal paramilitary groups. This phenomenon is ongoing, according to a leaked historic report.

Weekly Semana obtained an early copy of “Until Finding Them” of the National Center for Historic Memory (CNMH), an extensive report of the on forced disappearance in Colombia that continues to affect tens of thousands of families whose loved ones once disappeared, primarily at the hands of state-loyal paramilitary death squads, and never returned.

According to the Unified Victims Registry (RUV), 24 people were forcibly disappeared in 2015 and are presumed killed. This is nothing compared to 2002 when 14,886 were registered as forcibly displaced. That’s 40 people per day or one person every 36 minutes.

In total, the victims agency has 46,512 registered as forcibly disappeared.

However, the forcibly disappearance statistics presented by the RUV, the agency in charge of formally registering victims of the armed conflict, are low compared to those of the CNMH, which said that as many as 60,630 disappeared between 1970 and 2015.

“Disappearances” have come to be regarded as a quintessential evil practiced by abusive governments. The method seems to have been invented by Adolf Hitler in his Nacht und Nebel Erlass (Night and Fog Decree) of December 7, 1941. The purpose of this decree was to seize persons in occupied territories “endangering German security” who were not immediately executed and to transport them secretly to Germany, where they disappeared without trace. German authorities prohibited officials from giving any information in order to achieve the desired intimidating effect.

“Disappearances” were practiced on a large scale in Latin American by regimes supported by the United States. The tactic was in part a response to the success of the human rights movement in shaming governments for other human rights abuses, such as torture—and in mobilizing US public opinion against the imprisonment and killing of peaceful dissenters by client states. By keeping violations out of sight, governments made the abuses harder to trace and to condemn, and were thus able to avoid scrutiny and accountability.

Unlike Chile and Argentina, whose right-wing juntas have become infamous for massively disappearing dissidents, forced disappearances in Colombia have long remained out of sight exactly as they were meant to.

However, if you compare the forced disappearances statistics of those dictatorships with Colombia, Chile and Argentina are dwarfed.

Argentine Jorge Rafael Videla’s “junta” is accused of “disappearing” 30,000 opponents, not even half the number of people forcibly disappeared in Colombia.

While it has become a common misunderstanding that Colombia’s guerrilla groups are the primary culprit of war crimes, the CNMH report confirmed that also in the case of forced disappearances, the US-backed state has been primarily responsible for the macabre practice.

According to the CNMH, disappearances in Colombia began in 1970, around the same time as the US-backed dictatorships in Argentina and Chile. Also in Colombia, the US Military and the CIA were highly active helping its South American ally combat communism.

The first formally registered disappearance was that of Omaira Montoya, a leftist activist from the northern city of Barranquilla, who was registered as disappeared in 1977. Her killers proved to be state officials.

In 1978, President Julio Cesar Turbay presented the National Security Statute, which “consolidated the autonomy of the armed forces against the ‘internal enemy’ and the repression of dissident political expressions,” according to the CNMH report.

This concept of an “internal enemy” made “violence in the form of forced disappearance a common state practice, the report said.

Since 1981, state-aligned paramilitary groups, whose creation had also been promoted by the US Military, began massively and systematically disappearing alleged guerrillas, guerrilla supporters and anyone deemed undesirable.

Around the same time, guerrilla groups like the FARC and ELN began exercising the same practice. By 1983, some three people a day “disappeared” in Colombia, according to the RUV.

As both guerrilla and paramilitary groups grew, both began using increasingly cruel methods to combat each other.

The practice proved an effective way to get rid of an enemy with almost guaranteed impunity.

A 2013 report on the war by the CNMH showed that in almost half the cases of forced disappearance between 1970 and 2012, there is no clarity on who the perpetrator was.

Victim organizations hope that a peace deal with the FARC that will be presented to Congress on Wednesday and contains the creation of a Truth Commission will clarify who is responsible for the 49.2% of disappeared persons nobody has ever taken responsibility for.

Colombia’s guerrilla groups carried out 21.3% of the crimes. Almost 11% of established culprits were filed under “other.”

The demobilization of paramilitary umbrella organization AUC between 2003 and 2006 marked a major drop in forced disappearances, but still the practice perpetuated.

The US-backed military continued disappearing people, but rather than burying or dissolving the bodies like the paramilitaries did, they registered their victims as combat kills, a practice that became known under the euphemistic term “false positives” and has left thousands of civilians dead.

Additionally, paramilitary successor groups formed after the partially successful demobilization of the AUC have continued using the practice, using so-called “chop-up houses” to cut their victims into pieces and throw them either in the river or sea.

With the Truth Commission set to be installed, Colombians are going to have to face the fact that also in the case of forced disappearance, the main culprit is not the FARC, but the politicians they voluntarily elected, their paramilitary allies and the military.