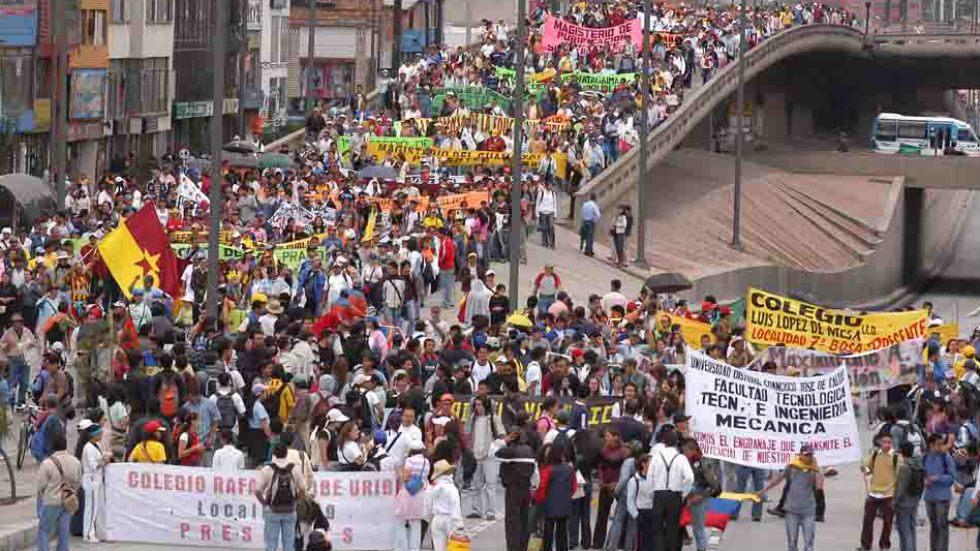 60,000 public school teachers gathered on the streets of Bogota on Tuesday demanding a government response to a crisis in the sector that sees an all-out strike move towards a month long.

The teachers were joined by students, the union of rice farmers, trade unionists from the Bogota Telecommunications Company (ETB) as well as the Judicial Branch as anger at the Santos administration spilled onto the streets of the capital.

The President of the teachers union, Fecode vented his anger at the government as its refusal to acknowledge the needs of the teachers has left 8 million Colombian students out of school since May 11.

“The negotiations with the Ministry of Education have stagnated on the economic point, due to the attitude of the Government that is summed up in a sentence: There is no money,” said Carlos Rivas, reported El Espectador.

In addition Rivas referred to the governments’ refusal to acknowledge that teachers’ concerns regarding healthcare claiming that “teachers are dying because the government does not guarantee them access to a decent health service.”

The teachers have been on strike for almost a month now demanding reform in education that would see dramatic investment in the sector in terms of pay and medical care as well a reduction in the student-teacher ratio, improvement in school meals, among others.

President Santos on Tuesday reiterated a claim he made several weeks ago that the government simply did not have the resources as the deadline for negotiations expired, much to the fury of the teachers union representatives.

“The Government has presented to them with full generosity, but also with full responsibility for our public treasury, fiscal responsibility, the proposals, and we have already reached the end of negotiations. I hope to reach an agreement on the wage increase and other issues on the agenda,” said the head of state, reported Caracol Radio.

The strikes began when the government and the teachers failed to reach an agreement during negotiations which began in the first week of March.

In addition to higher salaries and bonuses, the teachers union demanded recognition of previous agreements, which the government have failed to deliver upon.

The Minister of Education Yaneth Giha called the teachers’ decision to strike “unjustified,” while Fecode President Carlos Rivas said “it doesn’t seem logical that there isn’t funding available for education when there’s money for corruption.”

The teachers strike is the third in the past four years, and the fourth since Santos took office in 2010.