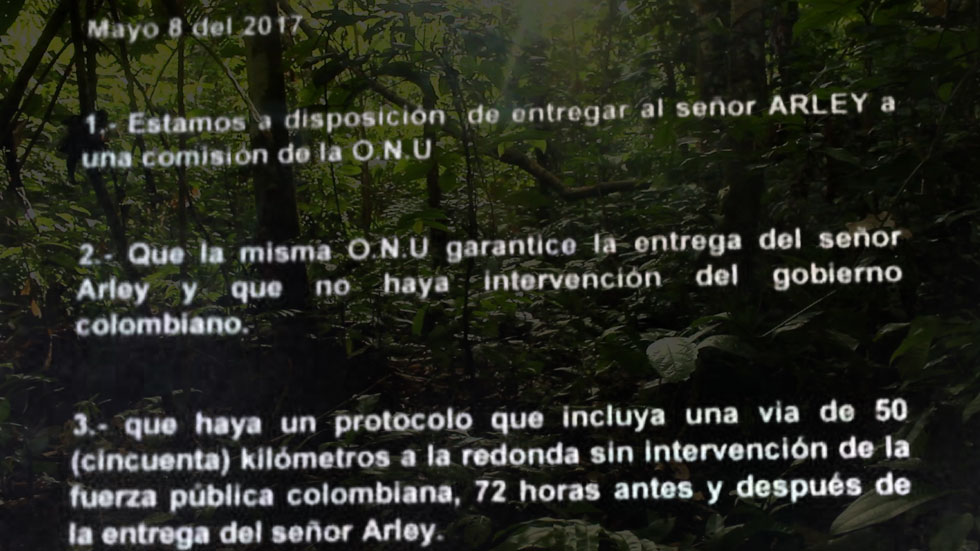 Alleged dissidents of the FARC, until last year Colombia’s largest rebel group, are reportedly willing to release a kidnapped United Nations official if military operations are temporarily ceased in the area around the hostage surrender.

Caracol released the note on Friday, a day after national media received and published a letter signed by the First Front, the dissident FARC faction accused of holding UN worker Arley Lopez hostage since May 3.

The victim is a United Nations on Drugs and Crime (UNODC) official, who was kidnapped in the southern Guaviare province just hours before the UN Security Council arrived in Colombia on May 3. 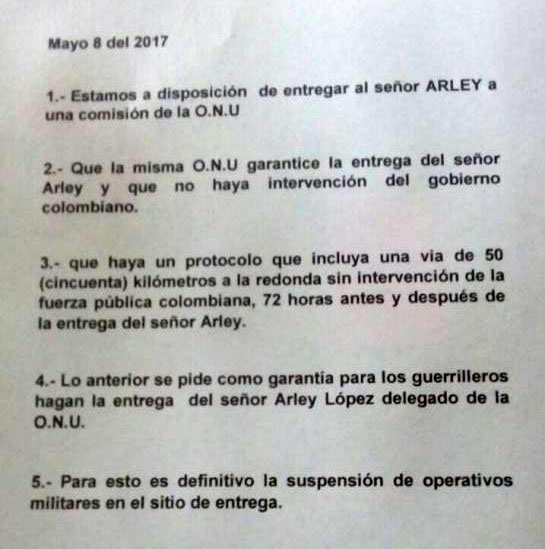 Presumed note from the kidnappers of UNODC worker Alrey Lopez.

Authorities or the UN have yet to make statements of the authenticity of either the letter or the note.

Caracol indicated that the unsigned note, signed May 5, had been brought back from the kidnappers on a USB by one of the locals — who together with colleagues of Lopez — had been looking to establish contact with the kidnappers.

The chronology of events suggests that the letter that was initially published was sent to the media by an imposter.

On Tuesday, Caracol reported that a delegation of community leaders had been summoned by members of the dissident First Front with the promise they would be surrendered the UN official.

However, the guerrillas had given the farmers’ delegation a USB stick with the request to deliver the device to the UN, the radio station reported that day.

Two days later, both Caracol and RCN received the three-page letter, signed the Friday before, in which the alleged guerrillas made a number of demands and statements.

The letter that was received by national media. (Image credit: RCN)

The note published by Caracol two hours after the initial letter concisely laid out that the guerrillas were willing to surrender the UN employee to a UN commission “without interference from the government.”

The condition for the release was that the Colombian military suspend all military operations in an area of a 50-kilometer diameter in the 72 hours before and after the release.

“Aforementioned is asked as a guarantee so the the guerrillas carry out the delivery of Mr. Arley Lopez, delegate of the UN,” the alleged First Front note said.

Four hours later, the United Nations said it wanted the “immediate” and “unconditional” release of its employee.

It is unclear whether the USB contained proof of life of the hostage, something the letter failed to provide.

Over the past days, all kinds of communications signed by illegal armed groups have appeared throughout Colombia, some impossible to verify.

Locals from Putumayo received a letter directed to them from an unidentified group, imposing a curfew and a issuing a death threat against all considered “guerrilla community leaders,” collaborators, snitches, women who gossip, among others.

However, more death threats have been sent of which the veracity is impossible to verify or has been rejected by the alleged authors.

Last month, a curfew allegedly imposed by paramilitary group Gaitanista Self-Defense Forces of Colombia appeared (AGC) spread throughout Colombia. However, the group’s spokesman told Colombia Reports “obviously we are not the authors of such nonsense.”

Hard-right Former President Alvaro Uribe, an opponent of peace with the FARC, on Friday published a second letter, signed by the demobilizing FARC itself, in which the group threatens to kill the mayor of San Vicente del Caguan.

The mayor is a member of Uribe’s Democratic Center Party and currently under criminal investigation for his alleged implication in the assassination of two farmers over a land dispute.

The former President, implicated it in a number of war crime investigations, has opposed peace with the FARC since talks began in 2012 and has stepped up his opposition in the months ahead of a transitional justice tribunal and truth commission.

The United Nations is in Colombia on an initial 180-mandate to monitor and verify the demobilization of the FARC, but has been asked by the Santos administration and the former guerrillas to monitor the 10-year peace process for another three years.

The UNODC assists the national governments in explaining local coca-growing communities about pending rural investments and a recently kicked off crop restitution program that seeks to combat drug trafficking.