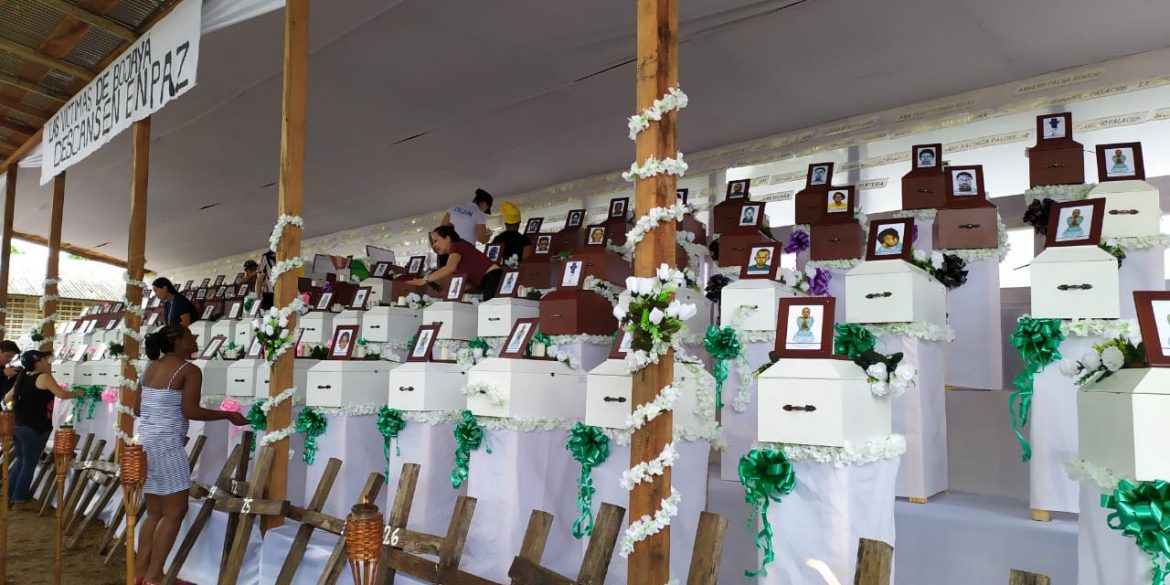 Seventy-seven victims of the 2002 Bojaya massacre in northwest Colombia were buried on Monday as their loved ones urged President Ivan Duque to implement the peace deal with their victimizers, the FARC.

The burial took place after a week of ceremonies that are part of the ancestral burial rites of Bojaya, an Afro-Colombian community in the western Choco province.

The belated funeral was the fulfillment of the state’s promise to vindicate the victims’ right to a collective burial and the latest of acts that is part of the peace process.

The community was forced to bury their victims by FARC guerrillas after the May 2, 2002 massacre in violation of their traditions.

It took the people of Bojaya three presidents to finally be granted their wish to identify and bury their dead according to their ancestral customs.

President Ivan Duque reportedly had promised to be present at the burial, but didn’t show up. The director of the National Victims Unit, Ramon Rodriguez, took his place.

Multiple foreign ambassadors were also present at the ceremony.

It has taken 17 years, five governments and much suffering for the community of Bojaya to finally receive the remains of their loved ones who died in the massacre of May 2, 2002, one of the most barbaric and terrifying acts of the Colombian armed conflict. It has taken 17 years for an official institution to finally cross the river back and face.

In a letter, the community wrote the president that they are at imminent risk of a repetition of the massacre and begged Duque to implement the peace deal with the FARC as promised by his predecessor, former President Juan Manuel Santos.

The chronic state abandonment has left Bojaya in the middle of an armed conflict between AGC paramilitaries, ELN guerrillas and the military.

The 2002 massacre took place when FARC guerrillas launched a home-made mortar to paramilitary fighters of the now-defunct AUC while the community was trying to hide in the church.

Instead of hitting the paramilitaries, the mortar hit the church, killing approximately 120 people. A Colombian court ordered the state to compensate the victims for failing to protect the community despite warnings.