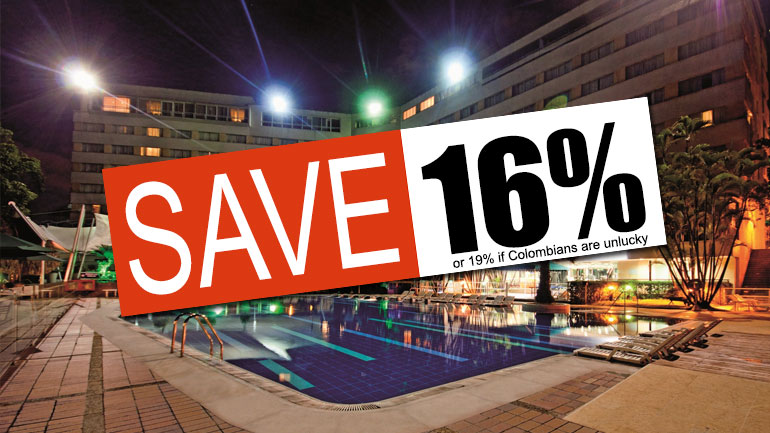 Colombia will exempt tourists from paying sales tax as an incentive for people to get to know the country, the country’s president said on Wednesday.

During an address at the country’s largest tourism fair, Anato, President Juan Manuel Santos offered foreign tourists an “incentive” by eliminating the 16 percent sales tax (VAT) on tourism-related services, from cultural to medical.

“Already the decree is prepared which exempts from VAT those who visit us from the outside and those who buy tour packages associated with health tourism, tourism events, or related to cultural activities,” Santos said, adding “this it is good news for travel agents to sell more and better price. ”

The move comes at a time when Colombian tourism is booming.  In total, more than 2.5 million foreigners visited Colombia in 2015 against 2.3 million the year before. In 2005, less than 900,000 visited the South American country.

The decline of the peso coupled with the improving security of the country meant the number of foreign visitors to Colombia grew 12.2% in 2015, according to the country’s trade ministry statistics.

The president welcomed progress that has been made in relation to tourism and acknowledges that Colombia is a more attractive destination now for tourists.

“We are no longer a risk destination but a dream destination, and prospects will get better once we finish the conflict and travel warnings end.”

Even though the national government has announced it will push a severe tax reform through Congress and slash up to 5% of ministerial budget, the President focused on Colombia as a global tourism destination.

The president considers the VAT exception as a progressive move as Colombia’s reputation as a tourist destination continues to improve.

“We are living more peaceful times than ever before. We are no longer suspicious citizens. But a proud people to whom doors are open. We are a country that advances towards normality,” stated Santos.

Tourism Vice-Minister Cecilia Alvarez said the VAT exception is an important tool to achieve the goal set by its portfolio, by  2018 to capture $6 million in foreign exchange accounts through travel and transportation.

“Tourism is one of the main beneficiaries after the signing of the peace accords. That is why we are preparing the sector to make it more competitive. Also for employers to make better use of sub-sectors such as health and wellness tourism, business and meetings, to expand its market,” said the senior official.

Controversially, the president is also considering raising sales tax for Colombians from 16% to 19%.