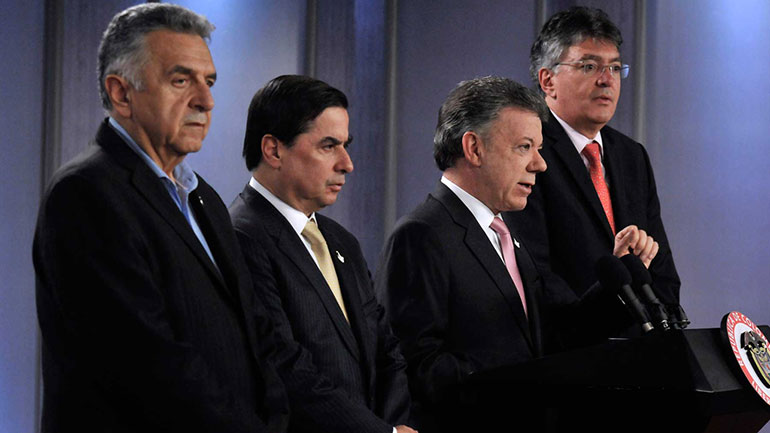 Colombia President Juan Manuel Santos on Monday announced his administration has cut this year’s government budget with 3% amid an economic slowdown caused by a drop in global oil prices.

The budget cut is due to drastically decreased revenue coming from oil, Colombia’s largest export product, that financed approximately 20% of the government’s expenditures until prices began dropping in the second half of 2014.

Since then, one barrel of Brent oil has plummeted from approximately $100 to $34, spurring major economic trouble in commodity-dependent countries like Colombia and its neighbor Venezuela.

The drop in oil prices did not just severely cut the Colombian government’s revenue through royalties, it nearly halved the value of the country’s currency, the peso, while driving up inflation.

In order to prevent overspending and curb foreign debt, “we have taken the decision … to cut spending for 201 with 6 trillion pesos, almost 3$ of the budget,” Santos said at a press conference.

According to the president, each ministry will have to cut spending with approximately 5%.

“You have to make adjustments when you have to, even though they are painful. It’s the responsible thing to do,” said Santos.

The budget cuts are in line with previously announced “intelligent austerity” measures already in the budget, the president said.

Santos denied that the economic storm combining a drop in imports and exports, and the peso’s devaluation are warning signs of a pending economic crisis.

“Our economy is solid. This has been acknowledged by organisms in charge of observing the global economy like the International Monetary Fund, the World Bank and the IDB,” the Inter-American Development Bank.

Colombia’s Gross Domestic Product saw impressive growth in the beginning of the decade, almost only because of increases in oil output and commodity prices.

However, when the commodity bubble burst, economic growth dropped and financial trouble for both the government and normal households began.