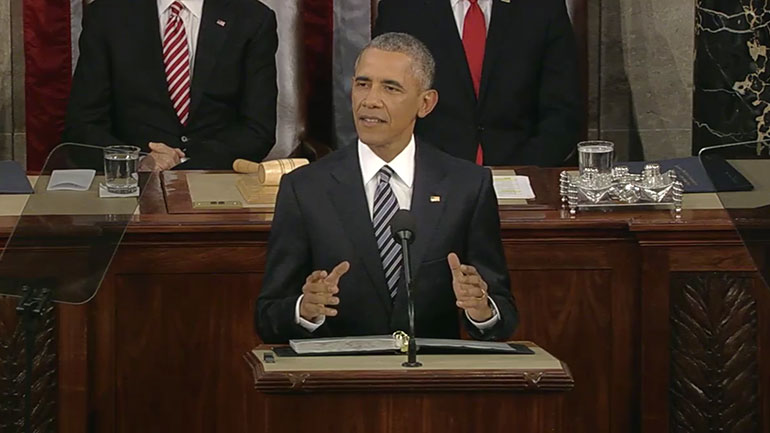 The United States’ efforts to resolve Colombia 51-year long war “strengthens the international order” the country depends on to maintain domestic stability and security, President Barack Obama said in his annual State of the Union on Tuesday.

Obama mentioned Colombia as part of an appeal before US Congress for a more intelligent approach to foreign policy, based more on generating common causes than exceeding in military might.

According to Obama, a global leadership role for the US requires a “wise application of military power, and rallying the world behind causes that are right.”

“Leadership means a wise application of military power, and rallying the world behind causes that are right. It means seeing our foreign assistance as part of our national security, not charity. When we lead nearly 200 nations to the most ambitious agreement in history to fight climate change — that helps vulnerable countries, but it also protects our children. When we help Ukraine defend its democracy, or Colombia resolve a decades-long war, that strengthens the international order we depend upon. When we help African countries feed their people and care for the sick, that prevents the next pandemic from reaching our shores.”

Within the same context, the US president urged Americans to perceive “our foreign assistance as part of our national security, not charity.”

The United States has long supported the Colombian state in military attempts to win a more than a 51-year-long conflict with leftist rebel groups, but shifted in 2012 to support peace talks between the administration of President Juan Manuel Santos and FARC rebels.

Since then, the two countries have been negotiating a shift in US policy towards Colombia.

According to Colombia’s ambassador to Washington, Juan Carlos Pinzon, Obama and Santos will present a revised “Plan Colombia” in February that will shift funds from military aid to post-conflict development programs while trying to maintain efforts to curb drug trafficking.

The plan was made up by former Presidents Bill Clinton and Andres Pastrana to curb cocaine production in the South American country while providing the funds to fight leftist rebels groups that have been deeply involved in drug trafficking to fund their insurgence.

The move to support a negotiated compromise rather than a military victory has been part of a broader policy towards Latin America that has included reestablished diplomatic relations with Communist-led Cuba and promoting international trade.

The promotion of this FTA was the reason Colombia was mentioned in the first three of Obama’s eight State of the Union addresses.

In his latest address, Obama pushed the Trans-Pacific Partnership that seeks more integrated trade with Latin American countries like Mexico, Chile and Peru, and a number of Asian and Oceanic countries including Japan and Australia.

Colombia is not taking part in this trade initiative.